'Anti-social vandals smashed our window and they broke my heart' 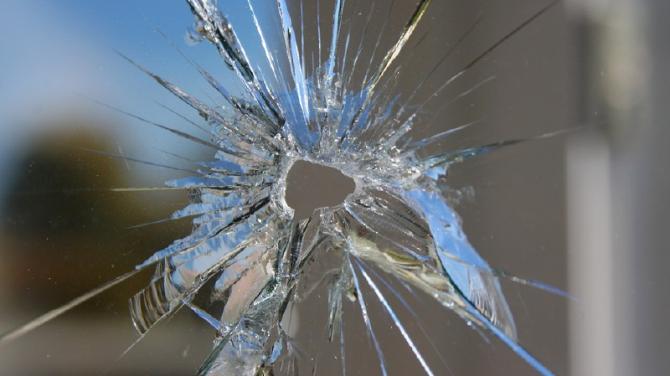 TEARAWAY teens have left a local pensioner ‘heartbroken’ after they destroyed a window which had been specially made to honour his dad.

Worse still, the vandal struck in broad daylight as hundreds of young people made their way to school.

A stone was hurled at the house in the Steeple at around 8.40am on Thursday morning - and at first the startled local pensioners thought a bird had flown into a window.

But then they discovered the broken glass, and the rock that had broken it.

The local man, who has asked not to be named, said he was ‘deeply saddened’ that his home had been singled out.

Addressing the vandals directly, he asked: “Did you think it would be fun to throw a stone at our window?

“When your stone broke our window, the noise of the double glazed window breaking severely traumatized both my wife and myself who are old age pensioners.

“When I saw the broken window you also broke my heart for that window was in memory of my father.

“It cannot be replaced for the company that made it no longer exists. We also have now to find the money to replace the window.

“This is what your actions caused so please think before you do anything foolish again.”

He also urged the stone throwers to pause and consider their future.

“Do you realise that what you did is classed as criminal damage?

“You could ruin your future by having a criminal record, so think twice and stick to schooling and hopefully a career.”

Anti-social behaviour has been rife in several Antrim estates in recent - to such an extent that it even prompted a public intervention from Mayor Jim Montgomery.

He spoke out following a series of disturbing reports of random attacks, including one incident when a teenage boy was left with a broken leg after he was targeted by banger thugs.

Councillor Montgomery confirmed that he had been in regular contact with the Neighbourhood Policing Teams to discuss rampant criminality.

“Anti-social behaviour is disruptive, intimidating and can often result in criminal damage to private property,” he said.

“The aftermath, which can include graffiti, littering and broken glass, has an ongoing effect on people’s perception and enjoyment of our Borough.

“I understand the problem affects many areas across the Borough, stretching resources of all those agencies who are working hard to limit this activity.

“I support our local police in all their efforts to tackle anti-social behaviour, and encourage other organisations with an on-street presence, to work together with the PSNI and the Policing and Community Safety Partnership to ensure everyone can enjoy their homes, and the Borough, peacefully.”

Following a recent meeting of the PCSP, where a policing report highlighted the rise in anti-social behaviour, Chief Inspector David Moore confirmed that tackling it was a priority.

“Policing is very much about reducing crime and tackling anti-social behaviour and I am determined to build confidence in policing in Antrim and Newtownabbey so that communities are safe and feel safe,” he said.

“Anti-social behaviour across the Borough has seen an increase and is a priority for police and our partners.

“Resources will continue to be targeted towards addressing this however it must be remembered that it is not entirely related to young people and indeed has many causes.

“Now more than ever, our behaviour both individually and collectively is critical not just in relation to anti-social behaviour but how we work together as a society to keep everyone safe.”

“The Policing and Community Safety Partnership deploys resources each year in an effort to tackle to tackle anti-social behaviour,” he said.

These include the Community Safety Warden Scheme. Wardens are on duty across the borough from 5pm to 11pm each Friday, Saturday and Sunday. The Wardens can be contacted on Mobile No: 07816144333.

“PSNI and PCSP continue to work in partnership with local community representatives and agencies to address these ongoing issues,” he added.

“Both agencies appeal to parents and guardians to speak with young people to ensure they know where they are going and who they are with.

“PCSP also appeal directly to those involved in anti-social behaviour to think about the effect of their actions and indeed the impact of getting a criminal conviction which could damage opportunities to travel, study or secure their preferred job in the future.”