'Do you know where your kids are?' 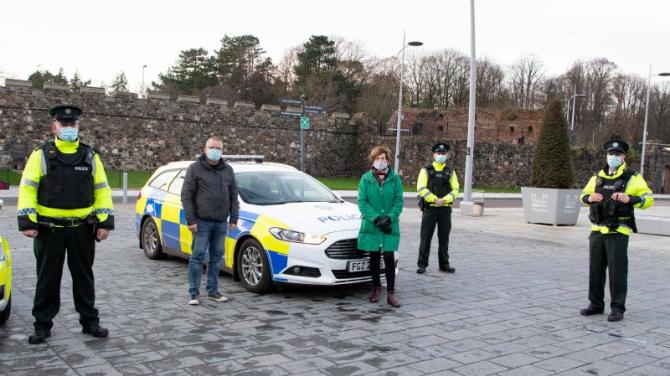 AS police continue to work to address ongoing issues with anti social behaviour, they have asked local parents to be sure that they are aware of where their children are.

Reports continue to be made from the community of hordes of young people gathering, particularly in Antrim town in Market Square and the Castle Gardens as well as around the train station and health centre site.

PSNI officers are actively patrolling these areas, speaking to the young people - who can be as young as 10 - and some of them have been found in possession of alcohol and other substances.

Spending the weekend conducting these patrols with his team, Neighbourhood Sergeant, Chris Tate stressed the need for parents and guardians to be ‘responsible and accountable’.

“Parents need to know where their children are, they need to know who they are with and what they’re doing,” he explained, while tasking members of the team to different areas of the town.

“It really is basic parenting and I’m speaking as a father myself as well as a police officer.

“You need to know that your kids are safe and police shouldn’t have to be arriving at your door to tell you that.

“We shouldn’t be coming to tell you that we have had to intervene to bring your child to safety or that they’ve ended up in hospital, or in a police cell or even worse.

“We also have the dangers of social gathering with Covid-19 to consider as well.

“We also appreciate that these large groups of young people can be intimidating for other residents.”

And the dangers for young people are all to apparent to Sergeant Tate and his team.

The dark nights and poor weather pose their own problems, as well as the road network the youths are required to navigate as the flit from the town centre to the Castle Gardens.

And the officers are well aware how large groups can easily move from a social gathering to low level anti-social behaviour and on to criminality.

“What can start of as a nuisance can escalate,” he explained.

“We can then see disorderly behaviour, windows could be broken, cars could be damaged, assaults can occur and we have to be mindful that child sexual exploitation is a very real concern.

“As we deal with all of this, we are very grateful that we have the voluntary agencies with that on-street presence as they are working to engage with these young people.

“The younger generation are running about the tail end of the older one and there is an element of peer pressure and bravado as well as curiosity.

“This can all be a gateway to other activities and all of this is exacerbated when drink and drugs come into play.

“And this really can be any child, every child is susceptible to this whether we as parents want to believe that or not.

“We can engage with families where parents feel that their messages are not resonating with their child, we will help you deliver that message if you feel that officers enlightening young people of the consequences o9f their actions would be of benefit.

“We do not always criminalise young people, there are other options and approaches we have.

“The Youth Diversion Officers and schools play a role and all of that comes together.”

With an acute awareness of the impact that drinking has on ASB matters, local officers regularly ensure that retailers are aware of their responsibilities in terms of alcohol sales and will increase their engagement in this area to strengthen their work on the ground.

“We will continue to do this to limit the pathways where these young people can obtain alcohol,” Sergeant Tate continued.

“The prevalence of the Think 25 approach helps greatly but we will be reminding retailers of their duties not only in ensuring that they are not making sales to those under the age of 18 but also their responsibility in being mindful of selling to those who may be procuring drink for others.

“If you have an 18 year old who is buying large amounts of alcohol, there is a need to question that.”

Officers are also targeting the train station during their patrols as concerns continue to grow for the safety of young people who seem to underestimate the danger of straying onto the tracks.

“Trains do what they call a silent approach as they come into the station so if these young people are on the tracks, there is every chance they wouldn’t hear it until it’s too late,” a genuinely concerned Sergeant Tate stressed.

“Translink have their bye-laws and when I’m talking to these young people, I am taking the chance to educate them.

“You should only be there if you’re travelling on the rail system.

“We have a very good working relationship with Translink and you can be fined £1000.

“This is not an idle threat, it will happen.

“There is CCTV at the station and while we have no specific town centre CCTV, individual premises have systems in place and quite often, dashcam footage is very useful, particularly when you think that there is a taxi rank right in the town centre.

“It is important to remember though that we can and will patrol everywhere.

“We have a good relationship with the Council and the security company which does the gates in the Castle Gardens and we have an arrangement for these to be closed earlier in the winter months.

“We will continue to be proactive in what we are doing.”

Also on patrol with the NPT on various shifts were Mayor, Jim Montgomery, Deputy Mayor, Noreen McClelland and other elected representatives.

Noreen McClelland said: “It is a cause for real concern that anti-social behaviour has been on the increase across the borough.

“We are all finding times extremely tough and I would ask those involved to think long and hard about how their actions are adding to the stress and anxiety of their community right now.

“I would encourage all incidents to be reported to the PSNI so that those participating in under age drinking, acts of vandalism or terrorising their neighbours can be dealt with appropriately.

“What may seem like harmless fun to you, risks your health and the health of others. It needs to stop now.”

DUP rep, Paul Dunlop added: “It is good to see such a presence in the town given the spike in anti-social behaviour in Antrim and other ongoing issues.

“I would reiterate the appeal that mums and das know where their kids are.

“There is also the on street presence with the wardens and pastors and they are to be thanked for giving up their time whatever the weather to keep an eye on our young people, look after them if they become isolated from their friends or have consumed alcohol or other substances.”