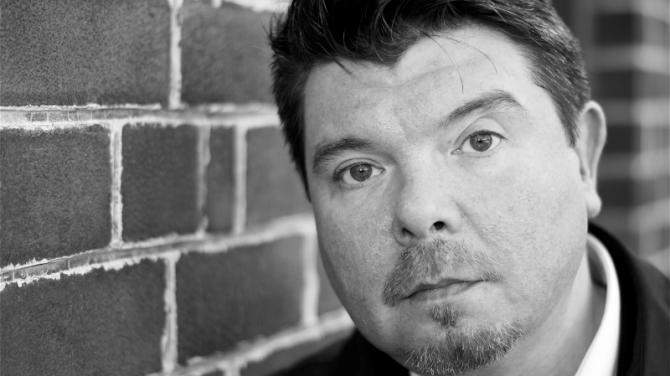 OCCASSIONALLY things are just a bit too close for comfort - and sometimes, just sometimes, you need the luxury of distance to appreciate and understand the very thing that was staring you in the face.

Antrim man Neil Mackay discovered just that when he returned to his former hometown to draw inspiration for his controversial debut novel ‘All the Little Guns Went Bang, Bang, Bang’ - a shocking tale of children damaged by the casual brutality of life in pre-ceasefire Ulster.

Battered into submission by violence, abuse and neglect they finally turn on their own before evening the score with the adult world that shaped them.

The blood red violence is laced with jet black humour but, for local readers at least, it is the vivid depiction of a 1980s Antrim that colours this tale.

Mackay knows his palette all too well and paints a grim worm’s eye view of life in the town’s urban sprawl. Home truths have seldom been so uncomfortably spoken.

Neil cut his journalistic teeth with the Antrim Guardian, reporting on a spate of grisly paramilitary murder in the dying days of the Troubles. Bad news sells, of course, and business was brisk.

But the local man was choking on the steady diet of death and desolation.

He wanted to break free from the stifling stench of sectarianism that had long since poisoned many of Antrim’s estates. In short he wanted out.

The year was 1995 and he never looked back. Until he began pulling together the threads of his first book, that is.

Neil’s rise in the Scottish media was meteoric and soon the plaudits, and awards, were flooding in. The former editor of the Sunday Herald added his distinctive voice to a dizzying array of projects including a BAFTA nominated documentary on the rise of the far right, an acclaimed book on the Iraq war - ‘The War on Truth’ - and regular stints on BBC Radio Scotland.

Yet behind the success, something was nagging away at the back of his mind. He was hearing the call of Antrim and its inhabitants and, irresistibly, he was being dragged home.

So when he needed a backdrop for his story of Troubles shared and innocence lost, where better than the streets of Parkhall that were once literally on his doorstep?

“Antrim was a very important part of my life growing up, so it was a natural step for me,” he explained.

“There are some lovely places in the town, but even its firmest supporters would have to admit that it has had its problems. It still does.

“Perhaps it was the huge influx of people seeking work in Enkalon in the late 1960s, but it always felt like a town without a true sense of identity.. A place lacking in community spirit.

“It was every man for himself. Dog eat dog.

“I distinctly remember growing up and being aware that this was often a dangerous place to be. It was an edgy town, and at times there was a tangible feeling of unease.

“That’s the Antrim I wanted to capture because I needed to create an environment which would turn ordinary children into killers.”

The real trick, however, was generating sympathy for these little devils. Creating monsters is easy - feeling for them as they inflict misery on others is something else altogether.

The main protagonist is Pearse Furlong, the son of a Catholic woman and an abusive UDR man. Smart, funny and blessed - or cursed - with a keen interest in Antrim’s bloody past and his family’s troubled heritage, this is a young man struggling with the burden of his history.

He befriends May-Belle, a victim of mental abuse from her mother and physical abuse from some of her men friends, and together they form a life-changing friendship.

Both the victims of dysfunctional families, they decide to take revenge on an indifferent society. Theft and arson soon give way to bone-crunching violence and cold-blooded murder.

Violence begets violence, it seems - and when it happens, Neil Mackay does not flinch away.

Oh no, he puts the kill into Kilgreel - the gore into Donegore.

“I knew it would alienate some people, but I think it is important to show the depths these young people have descended to,” he said.

“I decided early on that the violence would be ‘camera on’. Some people might cut away, but I wanted to stay with these characters when they did these awful things.

“I don’t want to rub the reader’s nose in it, but those scenes go to the very heart of the book.

“I want people to consider if these 11-year-olds are instrinsically bad or if the environment they live in has driven them to murder and maim. Is nature or nurture?

“Of course there are echoes of famous cases where kids have killed. I called the female character May-Belle quite deliberately because of Mary Bell. She was just 10 when she killed two boys in 1968. They were only three or four when they died.

“When I was growing up she was a bogeyman figure - a monster beyond comprehension. She was portrayed as this wild and untamed thing.

“The flip side is that she was the victim of terrible sexual abuse as a child. It has also been claimed that her mother tried to kill her.

“Against that backdrop it’s a miracle she survived long enough to kill anyone.

“Similarly, I doubt if Robert Thompson or Jon Venables set out to kill a child in 1993. They did, however, kill James Bulger in a particularly disgusting and horrific manner.

“Like Mary Bell, the question should be ‘why did they do this?’ - not how long should they serve for it.

“They should be put in hospitals, not prisons.

“Their crimes were terrible, but so was the response from sections of the public. I found it very disturbing watching the people outside the court at the Bulger trial trying to beat their way into the vans carrying these damaged boys.

“They were baying for the blood of children.

“That’s what I set out to do with the book, To look at all sides and give the reader all the information, then let them decide.

“I hope that there will be some empathy for the children, even after what they have done. If even some of the readers feel that despite the bloodshed, then I will be happy.

“It’s a gamble because it is so graphic in places, but I hope it pays off.

“I recall reading the Last Exit to Brooklyn and there was a scene involving a house invasion and an old lady. Its awful and I actually bit the book and threw it across the room in disgust.

“Later on, though, I picked it up again and finished it. The book had challenged men and made me think. The author was right to take that risk.

“The violence is shocking in my book too, but it is not exploitative. It’s there to make a serious point. It’s saying that society must shoulder some of the blame when children go off the rail. Pearse and May-Belle are victims as well.”

And then there is the small matter of love. With her beloved father out of the picture and his family devastated by terrorists, all they have is each other. And for Pearse and May-Belle that’s more than enough.

“There are some big themes at play here, but above all this is a love story. It’s far from conventional, but it’s still a love story at heart.”

The issues may be weighty, but there is certainly lightness to offset the shade. The reader would not care a jot for this pint-sized Bonnie and Clyde if they were not living and breathing characters, and in Mackay’s hands they are - and funny too.

The dialogue sparkles with genuine wit and invention and the language is often coarse, but unfailingly authentic. And that’s exactly how it should be, says Neil.

“Children are funny and I wanted to reflect that. Even young people with difficult upbringings still go out and have a laugh with their mates. Kids will be kids.

“There is a lot of humour in the book because I didn’t want it to be a misery memoir. Even in the darkest places you can find comedy.”

And in this book those places span from Shane’s Castle to the Sixmile, from the Weary Woods to the Castle Grounds, from Muckamore Abbey to the abandoned carriages at the railway station - with visits to Portrush and Ballymena thrown in for good measure.

There are mentions too for the Massereene Wolfhound, the White Lady, the O’Neill’s Banshee, and even Alexander Irvine who first put Antrim on the map with the story of his impoverished upbringing in the town.

But is this the end of the story? Perhaps not.

“Will there be more? Who knows? I would like to but we’ll have to see how it goes.”

Since then Neil has penned a second novel, ‘The Wolf Trial’, which examines the true case of a spate of murders so vile many thought an animal must have been responsible.

And, yes, the Antrim man once again pulls no punches!