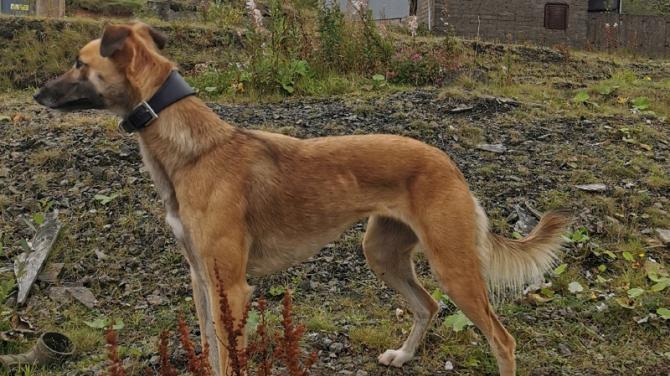 GYPSY, a lurcher rescued from the pound and owned by Rebecca Dalton from Antrim, has emerged as ‘top dog’ from a huge entry of high quality terriers, whippets and lurchers from all over Ireland and the UK.

The acclaimed top honour crown was awarded in the first ever Virtual International Terrier, Whippet and Lurcher Championships which was staged by the Virtual Game Fair.

The event was launched when the traditional Game Fair at Shane’s Castle was cancelled this year due to the COVID pandemic sweeping the world.

Undeterred, the organisers decided that the show would go on - on line.

“We will still give everyone a superb international event that’s free and easy to enjoy online that will run until the ‘real thing’ at Shanes Castle in 2021,” said a spokesman.

Normally, terrier, lurcher and whippet shows are staged every weekend over the summer throughout Ireland and the UK and finalists from these events compete in the UK’s top Five Nations Championships at the Irish Game Fair at Shanes Castle in June. However, due to restrictions most of these shows and the Game Fair itself were postponed.

Game Fair Organiser Albert Titterington said that much midnight oil had been burned to launch the virtual event with all of the attractions of the Game Fair such as trade stands and competitions like this one which are normally associated with the ‘live’ show.

“With most countries in some sort of lockdown our Virtual Game Fair has been boosted by ‘show goers’ and traders worldwide who had no other access to what is normally a major ‘live event’,” he said.

“It has been such a huge success that it will run in tandem with the live fair 365 days per year. It has already attracted record crowds worldwide, helped many hard pressed local businesses and kept many country sports enthusiasts entertained with a huge range of rural attractions competition to suit all tastes.

“Annual attendance at the event which received support from Antrim and Newtownabbey Council is likely to make it one of the best visitor attended events in Northern Ireland and a real tourism asset for not only the Council area but the whole of NI.”

“We were delighted that an Antrim dog emerged as the overall Champion of the first Virtual Game Fair International Terrier, Lurcher Championships.

“It was an excellent performance as all of the other prize winners were from the UK including Wales, County Durham, Newcastle on Tyne and even Bedford and even more heart warming was the story of how Rebecca acquired her.

Gypsy’s proud owner Rebecca Dalton said they found her quite by chance.

“We saw her picture on the pound website. She was so tiny and her colouring was very like one of our other Lurchers, Henry.

“When she was still small people often assumed we had bred her from him, But two years on they look nothing alike now.”

“We lifted her from the pound at eight-weeks-old. She was underweight, full of worms with a thin coat and red scabs all over from scratching.

“We got her home, switched her onto a raw diet and within a week her coat was growing back beautifully.

“We were fascinated to know how she was bred so we had her DNA tested and found she had quite a colourful ancestry Saluki/Whippet/Greyhound with a touch of Deerhound and Irish Terrier.

“She is very fast and we have shown, worked and raced her and are really looking forward to showing and racing her at the Game Fair at Shane’s Castle in June 2021.”

Rebecca and Gypsy won Feedwell Dog Food, a Barbour coat sponsored by Smyths Country Sports Coleraine, €50 sponsored by Jim Dalton, a year’s subscription to the Irish Country Sports and Country Life magazine, tickets to the 2021 Game Fair, an antique bronze trophy for being Lurcher Champion and a crystal trophy as overall show champion.

The full report of the championships can be seen at https://www.thevirtualgamefair.com/news