Drummer Darren may have taken the music world by storm - but he doesn't want to bang on about it! 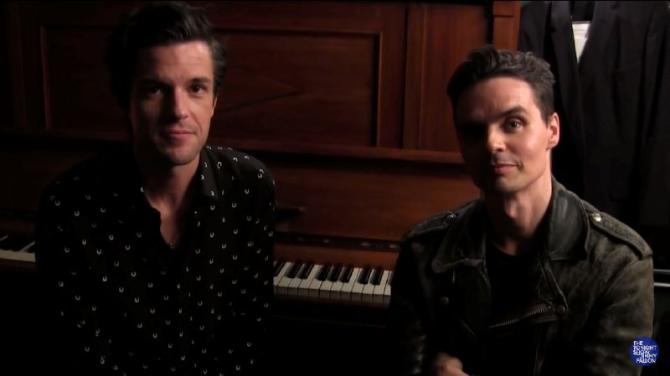 A sea of people had excitedly converged upon the Ormeau Playing Fields in Belfast to indulge in the beloved musical festival, Tennents Vital.

Although we were but a drop in an ocean, we had gathered to behold one of the world’s biggest bands, The Killers, do their thing.

It was an amazing day. The music was pounding, the sun gleaming, the atmosphere electric...

Yet, I will always remember one strange thing.

At the close of the concert, The Killers’ drummer Ronnie Vannucci Jr rose from his kit and yelled, ‘AT’S US NAI’.

The execution was just too convincing. He had pulled off the distinctive Ulster brogue way too effortlessly. The choice of a ‘Northern Irishism’ was too apt for an American to pluck from thin air...

This had to have been learnt from one of our own.

This had to have been the work of Antrim man Darren Beckett - the drumming prodigy from a little pond who grew up to make big waves in the music scene.

Darren’s star-studded career speaks for itself. He’s performed on over 50 albums, recording with notable names like Brandon Flowers, Daniel Lanois and Madeleine Peyroux.

He has also worked with the likes of Lauryn Hill, Shane McGowan, and Sinead O’Conner - yet he's not one to bang on about it (*ba dun tiss*)!

What few realise, however, is that Darren had attended both Antrim Primary and Antrim Grammar School growing up!

Darren had always been surrounded by music.

His father, Crumlin born Drew Beckett, had once been a keen drummer in the showband era, yet had stepped out of the spotlight to provide for his young family.

Drew never lost his love for percussion, however, and introduced young Darren to drumming when he was ‘aged four or five’. He proved to be a very quick learner indeed.

What blossomed was a deep and enduring love for music, and the development of a natural talent within Darren that caught the attention of teachers and established musicians alike.

“I was playing with blues bands in the Empire Music Hall in Belfast when I was just 12,” Darren recalled.

He also fondly remembers the two schools that nurtured his musical gift from a young age, naming Antrim Primary's music teacher Mrs Horn as a source of encouragement to continue playing.

“They both had pretty advanced music programmes, without which I may never have pursued a career in music at all,” he said.

Outside school, he was eager to sink his teeth into challenging work. He eagerly played and picked up tips alongside the likes of Belfast musicians Gerry Rice, and Jazz musician Foggy Lyttle.

“There was loads of stuff going on,” he said.

“I got involved in as much as I could, including the Arts Council of Northern Ireland’s Jazz Orchestra, which would rehearse every Saturday."

When he hit the grand old age of 16, back in 1991, Darren had developed an insatiable thirst for showbusiness - and it was one that couldn’t be quenched in the local scene anymore.

The young man fledged from home to study percussion at Cologne University - after a personal invitation by established American music tutor Keith Copeland.

Two years after that, our Darren was offered a scholarship to study at the New School in Manhattan.

“New York was the centre of the universe for a young musician. It was brilliant, but I’m thankful I arrived there when I did,” he said.

“It’s changed a lot over the past 20 years, like any major city. When I got there, it was dirty and gritty and incredibly exciting, from a musical point of view.

“But it’s become so much more commercial, all high rises and luxury apartments, a place for the super rich.

“Unfortunately, that kind of gentrification often pushes out the artists.”

Winning the Bass Ireland Arts Award in 1994 marked another milestone for Darren’s illustrious career as a musician and composer, which now spans over 25 years.

Beckett blew up. He worked tirelessly to support himself in a scene that he flourished within, from session work to collaborating with fellow artists.

One of such artists that he has developed a close working bond with is no other than Brandon Flowers, the lead singer of The Killers who also enjoys major success with his solo work.

“Brandon is a great guy and an amazing artist,” Darren said.

“I’ve been part of his band since his first solo album, Flamingo, which we recorded back in 2010.”

Famously, Brandon Flowers gave Darren a co-writing credit on the album’s critically acclaimed lead single, ‘Can’t Deny My Love’, which stemmed from a beat that Beckett had recorded on his iPhone!

In 2016, Darren - now with a wife and two children - left the Big Apple for London, where he is now the head of the Drum Department at The Academy of Contemporary Music.

He still plays an active role in live music, performing in Jazz linkups around the city and appearing in studio sessions in Dublin.

With a life so colourful, how does one even consider a highlight?

Darren Beckett thoughtfully considered, and decided that it was when he made his family proud.

“Back then, I was 13, living in Antrim and thinking that it would never happen for me.

“But I got to play Carnegie with Madeleine [Peyroux] a few years back, and my parents came over to New York for the show.

“I made them proud, and that, for me, was the most important thing.

“That was a big moment. The biggest.”