The Pope was unable to come to Antrim - so Antrim went to him! 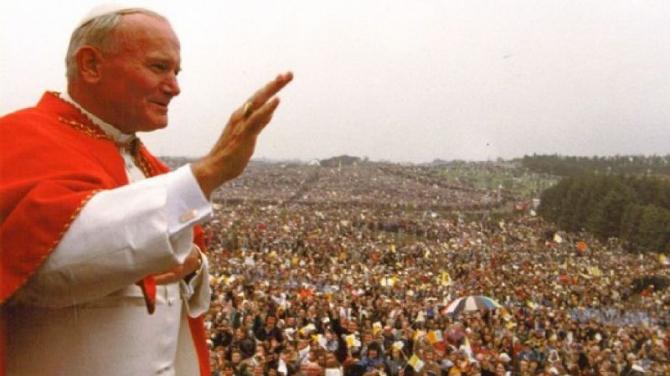 FOUR decades ago the sense of excitement among Irish Catholics, both north and south of the border, was palpable.

They were being drawn together as one by the arrival of Karol Jozef Wotjtyla. Once a talented goalkeeper in his native Poland, he was now saving souls as Pope John Paul II.

This was the first ever trip to Ireland by a Pope and over three days from September 29 to October 1 1979 the Pontiff was greeted by over 2.5 million people. This truly was devotion on an epic scale.

The numbers really do beggar belief. On his arrival he flew to Phoenix Park to deliver Mass to 1,125,000 people - which was roughly one third of the population of Ireland at the time.

Then it was on to Drogheda, pencilled in after Armagh was deemed just too dangerous as the Troubles brought mayhem to the streets.

Many crossed the border to join the 300,000 gathered for a Liturgy of the Word.

The Pope seized the opportunity to speak directly to those embroiled in the sectarian carnage. By that time 2,162 people had already died.

“On my knees I beg you to turn away from the path of violence and return to the ways of peace,” he said.

The next day he visited a Monastery in County Offaly before celebrating a Youth Mass for 300,000 people at Galway - and among the sea of faces were hundreds from Antrim.

As he uttered that famous phrase - ‘Young people of Ireland. I love you’ - it resonated with the six bus loads of local teenagers who had created a huge banner which revealed that the feeling was mutual.

It read, quite simply, ‘Antrim Loves You’.

He reveals, for example, that the banner was painstakingly made by parishioners Tommy and Bridget Lennon, who also included some pictures of St Patrick and the Pope himself.

A second group carried an ‘official parish banner’, made by Francis and Nancy Lee.

Though they were due to see the Pope on September 30, the long journey south actually began some 24 hours earlier.

But they were relative late-comers compared to some! The first two buses packed with adults left at 3am that morning to make the trek to Phoenix Park.

By 6am another half dozen buses were on the move, heading south to Drogheda.

The good people of Antrim were covering all bases!

The latter recalled that it was a pivotal moment, particular for the young members of the congregation.

“The anticipation with which the young people left their homes, watching what seemed like an almost deserted Antrim disappear in the background and turning their faces towards an experience which was to be almost indescribable in its meaning for each individual.”

They were, unsurprisingly, in ‘high spirits’ as they sang their way southwards - using the time to practice the hymns for the Mass.

They took particular care to perfect the Polish hymn which was to be sung for the Pope. Clearly they had been tutored well by Father McEnaney.

There was time too for prayer and most agreed that the journey passed with surprising speed.

And thanks to the hard work of a baker back at home, they were able to keep the hunger pangs at bay.

Before they left the pilgrims took delivery of 1,500 bread rolls from Lowry’s of Church Street - and Father Byrne said the entire party was touched when the order arrived to find it accompanied by a loaf in the shape of the Cross.

“All of us felt that we had the good will of Mrs Lowry and indeed the goodwill of many other people who were not directly concerned with the Pope’s visit,” he said.

In those pre internet days, many used their trusty transistor radios to chart the Pontiff’s progress following his arrival at Dublin Airport.

During a stop at a small town for refreshments, local residents even threw open their doors to the young pilgrims to allow them to watch his progress on television.

Thousands were making the same journey. The Pope may have answered the prayers of Catholic Ireland, but it was proving to be a logistical nightmare for the organisers.

Like a busy airport, each coach was given an arrival time to prevent complete and utter gridlock.

The St Comgall’s convoy were expected at 6pm, and to their credit it was five minutes past when they trundled into Ballynasloe.

They were immediately ushered to their encampment site and greeted with hot soup and rolls, before erecting the two marquees, five Icelandic and several chalet tents needed for their temporary sleeping quarters.

The visitors were invited to explore the town, but the Antrim throng decided to stay together and by midnight most were ready for bed - though because of the unseasonably mild, balmy weather some ‘used the sky as a ceiling’.

Others were just too excited to sleep at all - but given the scale of the operation to get the young people to their allotted places in the crowd, they did not miss much.

They were among the first to arrive at the race course and got pride of place in the grandstand, alongside many others from north of the border.

And for hours they waved their yellow and white flags, many of which were hastily made for them by a patient hardware merchant from Ballymahon.

Rev Father Michael Cleary kept a running commentary as they awaited the arrival of the Pope at 10am - but he later conceded that the lengthy wait flashed by, such was the excitement.

And then the distinctive orange helicopters came into view.

“Everyone started to wave even before they could see him and then we were able to catch a glimpse of a white figure waving to us,” said Father Cleary.

“The feeling was just indescribable - the sheer desire of the crowd to have the Pope among them.”

He added that it was a moment that none of them would ever forget.

Time, he said, ‘ceased to exist’ from when the Pope arrived until the time he left.

Better still, the cheering crowd from Antrim had some of the best seats in the house.

Sadly one local girl did not get the opportunity to reap the reward of their patience, as she was raced to Galway Hospital after taking ill.

The rest were not going anywhere - fast.

Indeed, it was not until 7.30pm that the roads were clear enough for the Antrim contingent to make their way home.

And even though most had only snatched a few minutes sleep in the previous 36 hours there was a sense of ‘elation’ as the six buses trundled north once again.

“Every one of the young people who had seen the Pope and partaken in the Mass was conscious of a sense of spiritual renewal,” said Father Byrne.

Indeed, he had been more hands on than most, as he was one of the 800 priests who gave Holy Communion during the Youth Mass.

“I think those who saw this marvellous man feel they know him - know that he loves them,” the local priest said.

“When he told them of his great love for them, the response was overwhelming and lasted for a good 10 minutes.

“I also think his visit will bring more young people back into the church and perhaps make them feel that it is less alien to them than they thought.”

Ireland would have to wait until 2018 for the next Papal visit, but Pope Francis came to a land much changed.

The scenes that greeted the young people from Antrim that day 40 years ago will probably never be seen again - but they will surely never be forgotten.