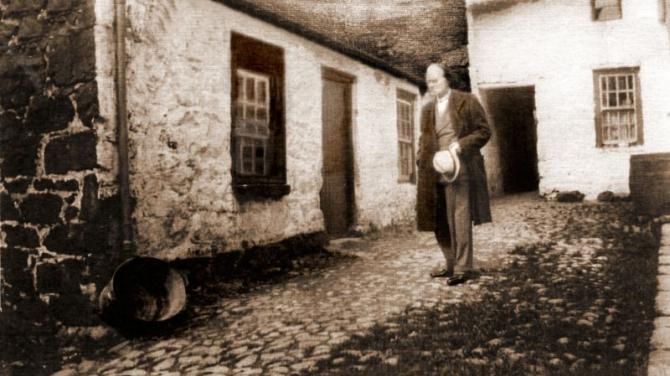 “THE world in which I first found myself,” said Alexander Irvine of his childhood in Antrim in his autobiography, “was a world of hungry people. My earliest sufferings were the sufferings of hunger - physical hunger.

“It was not an unusual sight to see the children of our neighbourhood scratching the offal in the gutterways for scraps of meat, vegetables, and refuse. Many times, I have done it myself.”

Such formative experiences scarred the psyche of Antrim’s most renowned literary son like a branding iron. Before touching hearts worldwide with his 1913 masterpiece ‘My Lady of the Chimney Corner’- a heartfelt tribute to his mother, Anna Gilmore Irvine (a lady in ‘every respect but the material one’) and an unflinching, semi-autobiographical portrayal of the hardships of scraping a living in the Victorian era slum of Pogue’s Entry - Alexander was just one of 12 Irvine children, raised in the grinding poverty of 19th century Antrim.

Although he would go on to meet kings and presidents - and count historical and cultural figures ranging from WB Yeats and Mark Twain to Albert Einstein and Marie Curie as friends and associates - Alexander Irvine would never forget the harsh hardships of his Antrim upbringing.

The author’s successes obviously meant that his fortunes would go on to shift dramatically - when he eventually died in 1941, he did so comfortably in his well-furnished Californian home - but Irvine’s roots ultimately defined not only his socially conscious political outlook during his life, but also his enduring legacy.

Yet, if Antrim provided the deeply personal catalyst behind his writings, then so too did it shape one of Alexander Irvine’s most prominent secondary legacies - that of an evangelist and vociferous social reformer in the United States at the turn of the twentieth century.

Irvine had already lived out several lifetimes worth of experiences before arriving in America in 1888. From inauspicious beginnings, working at home with his father as a cobbler, selling newspapers on the streets of Antrim for a few pence apiece and even serving as a living scarecrow protecting a farmer’s potato field, the local youngster enlisted in the Royal Navy aged 19 following brief engagements working as a coachman and a miner.

The Antrim man’s military career, although short-lived, opened doors that likely would have remained shut had he remained at home. For instance, whilst enlisted, Irvine learned to read, enabling the hitherto uneducated Antrim man to matriculate at Oxford University.

After two years of service, he found a new calling - the pursuit of missionary work. He travelled to the United States with his first wife Ellen Mary Skeets - whom he had married during a period of leave - and their two sons, William and Robert.

Initially proselytising amongst the poor and homeless of Manhattan’s Bowery district, Alexander’s brand of evangelism was heavily guided by the same social and religious convictions of his mother that would go on to provide the moral backbone to ‘My Lady of the Chimney Corner.’

In the words of scholar Kathryn Oberdeck, it was her who had initially impressed upon Alexander that “God cared equally for everyone, rich and poor, and that extending help and fellowship to local people in need was a deep expression of Christian teaching.”

It was to be a false start, however, hampered by a rocky period in Irvine’s personal life. His wife Ellen Mary left him and returned to the United Kingdom, and after four years preaching on the Lower East Side, Alexander suffered a nervous breakdown that prompted an exodus to Omaha, Nebraska.

There, he married Clara Maude Hazen - with whom he had four additional children, Robert, Anna, Maurice and Jack - but, feeling constrained by the lack of opportunities in Omaha, Alexander opted to return to missionary work as the religious director for the New Haven YMCA in 1898.

It was in New Haven that the radicalising nature of Alexander’s memories of life in Antrim as a pauper began to manifest into his increasingly fervent sermons.

He was particularly keen on emphasising the prophets Micah and Amos, who he believed had too much to say about square dealing and justice to be popular in wealthy hierarchical churches, and, delving deeper into socialist trade unionism, Irvine quickly took on the responsibility of a protectorate of the working class.

In doing so, he drew extensively upon his own first-hand recollections of privation in Antrim and their resultant impact upon his religious and political beliefs.

Irvine’s own conversion to Christianity had, after all, taken place during his adolescent stint as a ‘human scarecrow’ where, in a field on the outskirts of Antrim, a beautiful sunset convinced him of the existence of God. The would-be author evoked such memories of his beatific countryside epiphany at home to his congregations, often accompanied by slides of pastoral paintings depicting the hard-working rural poor as rendered French realist painter Jean Francois Millet.

The hard-learned lessons of Pogue’s Entry shone through once again when Irvine backed workers during a 1902 metalworker’s strike at New Haven’s Sargent hardware factory. When internal tensions threatened the cohesion of the protest - especially when Anglo and Irish Americans grew suspicious of their Italian co-workers - Irvine called for ‘solidarity’ and ‘the absolute need of united effort among working men’.

Comparisons abound to Irvine’s mixed-faith upbringing in Antrim. With his mother coming from a Catholic family and his father from a Protestant family, Alexander learned early on the importance of overcoming cultural differences in order to prevail over the many obstacles of penury.

Irvine’s strong sense of injustice at the notion of the rich forcefully subjugating the poor could prove controversial, particularly when he spoke out against imperialism and war. He shocked many Americans when he dismissed their celebrated 1900 naval victory against the Spanish at Manila Bay as ‘unfair’ and characterised it as a battle of ‘wood against iron, brains and wealth against ignorance and poverty’ - and further criticism still came when he joined the Socialist Party in 1903.

“The red label was costly,” the Antrim author later concluded, “but my mind now had something akin to the Gospel to fight and suffer for.”

Yet, Irvine often best communicated his proletarian message when he placed it within the Trojan horse of his fictional writings, especially when his career as an author took off in the 1910s.

Traces of Alexander’s reformist streak can even be found lurking in the pages of ‘My Lady of the Chimney Corner’ - not least when, early on in the novel, Willie tells Anna that he gets ‘more good switherin over an ant hill than when one of them wee preachers tries to make me feel as miserable as the devil’ - but it is far from his most politically charged work, instead today remembered more for Irvine’s affectionate portrait of his beloved mother.

However, another work, which Alexander wrote in the same year as his magnum opus, is far more revealing of his radical-for-the-time socialist outlook - and it too utilises Antrim as its backdrop.

‘The Rector of St Judes’ is a play that Alexander wrote and performed on the vaudeville circuit in 1913-14, in the wake of the enormous success of ‘My Lady of the Chimney Corner’. Thematically, it deals with the dilemma faced by Dr Gordon, a self-referential character who is the minister of Muckamore’s St Judes Church.

Factory workers employed by one of the leaders of St Jude’s, Mr Stuyvesant, are on strike, and, much to his chagrin, Dr Gordon takes their side, refusing to cover Stuyvesant’s ‘piracy with the cloak of religion’.

As much a manifesto as a form of entertainment, the play culminates with a rousing speech from Dr Gordon.

“Our fight is to abolish the whip altogether! There shall be no slaves and no master,” his concluding speech says.

“With violence you may make the streets run red and accomplish nothing. By the power of a great ideal and a combined working-class vote, you can change the face of civilisation!”

When the play was performed at his former mission at New Haven, the response was rapturous. The playwright and his play received a spirited standing ovation, said to have been the most enthusiastic of his entire American tour.

When Alexander Irvine returned to Antrim for the final time in the 1930s, he admitted that the excitable response from the local community made him feel like ‘the most astounded man in creation’. After all, when he left the town, he had been just one of many faceless urchins scavenging for leftovers on the streets. Now, he was one of the town’s most celebrated exports.

He visited the grave of his parents in the yard of All Saints Church, embellished in 1927 with a marble stone bearing the inscription ‘Love Is Enough’.

And, when he politely asked his assembled entourage for privacy to soak up the old atmosphere of his home once more, he returned to his old cottage at Pogue’s Entry. There, he was photographed one more time standing alone before the humble hovel where it all began.

After his death on March 15th, 1941, Alexander Irvine was cremated and, in 1946, his ashes were returned to Antrim. There, he was interred with his parents on July 27th, 1946, after a service held in Pogue’s Entry.

“How curious,” Irvine had observed during his later years, “that although many rich and noble people have been buried at All Saints’ during the centuries, only the graves of a cobbler and his wife draw all sorts and conditions of people to that old graveyard.”