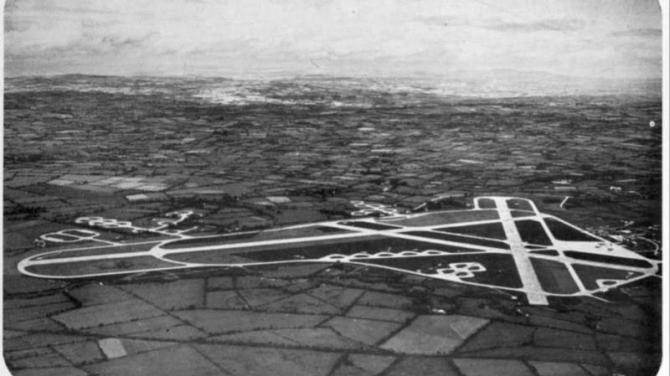 THE Antrim area once played host to three different airfields within five miles of each other, which would be used by the Allied forces during the Second World War - Aldergrove, Lanford Lodge and Nutt’s Corner.

Located roughly 13 kilometers from Belfast, between Antrim and Crumlin, Nutt’s Corner was opened as a civilian airport in 1934, however this didn’t last when it was taken over by the RAF at the start of World War Two.

It is important to note that Aldergrove was also during this period for civilian transport, opening in 1920.

The two airports operated side by side.

Supplies coming into Britain were of absolute importance and in 1940 RAF Nutt’s Corner was expanded to deal with expanded operations against the U-Boats.

It also was used as an transport hub for aircrafts arriving from the USA.

In 1941 the Luftwaffe sent reconnaissance planes to survey and photograph the operational airport.

No. 120 Squadron operated B-24 Liberator maritime patrol bombers from the base from 1941.

However Nutt’s Corner didn’t have its own separate standing Squadron.

The most important aircraft during the Battle of the Atlantic was the long range Liberator, which would often head out as far as Iceland and Greenland to carryout missions.

These became the most successful planes used to sink U-Boats.

They were also used in convoy escorting duties.

Immortalised this year in the Tom Hanks film ‘Greyhound’, the Liberators are seen at the end of the film helping the convoy on its’ way from the United States to Britain.

The film itself mentions the airports in Londonderry during exchanges with the Liberator crew.

At the height of the war the base was used as a supply route for the USAAF Flying Fortress and became part of a vital supply route.

A Liberator crashed on landing on the December 13 1944.

In 1942, Nutt’s Corner played host to a Royal visit, when King George VI and the Queen played a visit to inspect the station, an occasion which can still be recalled by many people still living in the community.

Another, less well known visitor was an airman who described the site in colourful terms.

Sgt. Wop/Ag. Eddie Cheek wrote: -“In June 1941, I was posted to 120 (General Reconnaissance) Squadron at Nutts Corner, In Northern Ireland; of course nobody had heard of the place.

“After crossing the Irish Sea on the Stranraer / Larne ferry, I eventually arrived at Nutt’s Corner.

“After reporting to the Orderly Room I found I was to fly on Liberator aircraft, whatever they were.

“I asked for directions to the Mess, and was more than surprised to be told that it was one mile up the road, with another walk of half a mile to the accommodation site.

“My first impressions on Nutt’s Corner were, though it was not the end of the world, if the Good Lord decided to give the world an enema, here was the place.

“Living conditions could hardly be described as comfortable on this vast dispersed station.

“We were housed in those semi – circle monstrosities called Nissen huts, with just one eighth of an inch of corrugated metal separating us from the far from benign Irish elements.

“We used to say that if one could see Lough Neagh, then the rain was approaching, if one couldn't, then it was raining.

“Whether this form of accommodation was dictated by financial stringency, or the urgency of war, or was a deliberate attempt by their Airships to toughen us up, I do not know, but if it was the latter, I have to say that the most hardened criminals enjoyed far better accommodation as guests of His Majesty.

“A small coal burning stoves, with long narrow chimneys protruding through the roof, heated the rooms.

“One would sit in the room, in front of the fire.

“Boiling in front and freezing behind. Our reveries were often disturbed by what was considered to be a harmless prank.

“A ‘friend’ would climb onto the roof and drop the filling of a Very cartridge down the chimney.

“The effect was both frightening and fantastic: the cartridge burned fiercely, building up sufficient pressure for the small inserts on top of the stove to be hurled up to the ceiling, and the room would be suffused with an intense light, the colour of which depended upon the cartridge selected.

“Although ones heart soon returned to its normal pace, it took some minutes before normal sight returned, by which time ones ‘friend’ had made a leisurely escape.”

The airport went back into civilian use once the war drew to a close.

In 1953 a Vickers Viking crashed on the runway after it collided with landing lights.

27 passengers out of 35 on board were killed, making it the worst air disaster in Northern Irish history.

Four years later another tragedy occurred when a Vickers Viscount crashed and killed all seven on board.

The two civilian tragedies led to the airport being scrutinised and an investigation showed that the airport was unsuitable for the purpose, due to its’ steep approach, frequent foggy conditions and location close to the Belfast mountains.

In 1959 operations were all moved to Aldergrove and by September 1963 the airport was fully closed.

There are a few buildings left and some of the diamond hard-standings as well as sections of runway remain.

There is also a market every Sunday which attracts hundreds of people looking for a bargain!

Another section of the runway plays host to a number of henhouses, providing an ideal flat service.

The site also plays an important role in the motor sports scene in the North with part of the runway being used as a race track.