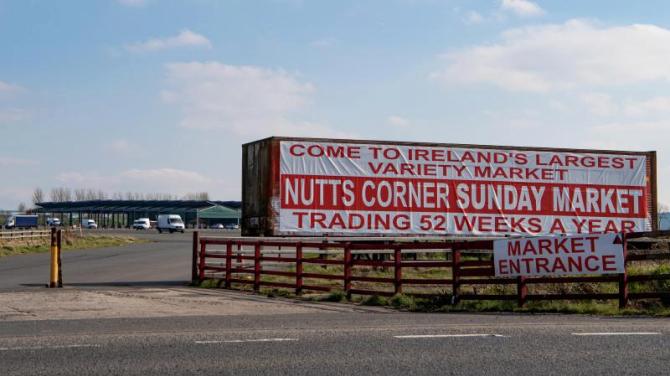 NUTTS Corner Sunday market recently issued a statement on Facebook regarding trading regulations for the run up to Christmas.

Organisers revealed that the market would be open from November 29 with ‘essential stalls only trading’, emphasising that ‘there will be no car boot for the next two Sundays’.

The popular Sunday market had previously received a severe backlash in the wake of their decision to open as normal for custom on March 22 amidst the early days of the coronavirus outbreak - with some even branding it ‘reckless’.

Nutts Corner market organisers responded to the backlash by closing ‘until further notice’, though they stressed that they felt the criticism was a ‘bit unfair’.

The market reopened on August 2, introducing regulations for costumers and traders in the hope that it will ‘make the market safer for yourself and others’.

With car-boot sales being scheduled to reconvene in the days leading up to Christmas, many bargain hunters will be chomping at the bit to pocket a deal on stocking fillers.

And while the vast majority of the traders will be perfectly reputable, other elements will undoubtedly be keen to cash in too.

It is a reflection of how far the market has come that they will struggle to peddle their dubious wares.

In a hard-hitting interview with the Antrim Guardian back in 1999, David Lowe of the Federation Against Copyright Theft, branded Nutts Corner ‘the worst in the UK’ for organised crime.

During a court sitting in Antrim, in which a trader pleaded guilty to 36 charges of possession of an unauthorised trade-mark, the defence council claimed that it was ‘almost the culture’ to sell illegal games and movies at the market.

Nutts Corner has since struggled against a tarnished reputation to assert itself as a contemporary, family friendly venue - and with some success.

And while it is undoubtedly challenging to fully control the counterfeit trade at the sprawling venue, it certainly is not operating at the levels of yesteryear.

At the turn of the millennium, an in-depth investigation revealed that rogue traders were pushing legitimate traders against the wall - and helping line the pockets of paramilitaries.

Amongst these horror titles included controversial 'snuff' titles documenting real murder and mutilation curated from news sources around the world - including graphic and unedited footage of Michael Stone’s attack on Milltown cemetery.

Even ‘The Hooded Gunman’, the controversial Northern Ireland Troubles multiplayer video game - in which players act as a member of a loyalist or republican gang, racketeering drugs and killing members of the opposition - had a black market in Nutts Corner!

The police warned that patrons hoping to cut corners at Christmas time would be bitterly disappointed by the quality of the illegal goods.

Football shirts were of very questionable quality, DVDs would fail to start, CDs would only carry partially recorded tracks and video games would play for a period of time before stopping altogether.

Efforts to return the items would allegedly result in sellers claiming the patrons had not actually purchased the item from their stall.

Many of these dodgy dealers sold their wares with the blessing of paramilitaries, under rackets.

Pressure mounted upon the police to act - and once the long arm of the law encircled the venue, the war of wills between the Del Boys and the blue began.

Thousands of pounds of merchandise was being raided on a weekly basis from the Sunday market, only to be swiftly replaced by the godfathers behind the illegal trade.

Yet, the police refused to relent, and continued to sweep the stalls for dodgy gear.

Weeks turned into months, months turned to years - and the true cost of racketeering at Nutts Corner began to emerge.

Back in 2003, Sergeant Muir Clark asserted that their work there was still not done - and that the crusade would continue to crack down on counterfeit.

“When we began our work at the market we had no doubt that funds were being channeled into illegal activity,” he said.

“I would say that the impact we have had up there has all but reduced to a trickle any funds going to paramilitaries.”

At around the same time former councillor and MLA Adrian Watson stressed that locals have a role to play to ‘bleed these gangsters dry’.

But he added that locals should continue to support legitimate stall holders. It would be unfair, he said, to ‘tar all traders with the same brush’.

“Local people who choose to spend money on goods they know are not legitimate must realise that their money is being pumped back into crime,” he said.

“Much of this cash is lining the pockets of paramilitary organisations... By shunning them, we are effectively cutting off that revenue.

“I know there are many decent stall holders who have been struggling to make a legitimate living.

“The increase of black market goods have hit them hard - and the adverse publicity they have generated hasn’t helped either.

“These traders deserve our support.”

In one year, Northern Ireland lost £135 million in revenue due to the counterfeit goods in circulation - which was enough to build a new hospital.

Yet, come 2007, Nutts Corner market seemed to have started cleaning up.

The Organised Crime Squad seized £2,076,428 in just six months across Ulster, but ‘practically nothing’ had been uncovered at Nutts Corner.

In recent years, things have improved drastically since the heyday of the trade wars - but its by no means over.

Just last year, a ‘significant’ amount of illegal fireworks were seized by the PSNI.

A spokesperson said while local officers dealt with a young person for possession of fireworks, other members of the team had a look around the immediate area.

Reviews from Google suggest that Nutts Corner has made commendable improvements to ensure ample accessibility for disabled visitors and families with prams.

Many will undoubtedly return to the market - but buyer beware.

However low the price may seem, consider the wider cost to the community when confronted with counterfeit goods.

If it sounds too good to be true, it probably is.