Past times: an unforgettable journey to the top of Big Ben! 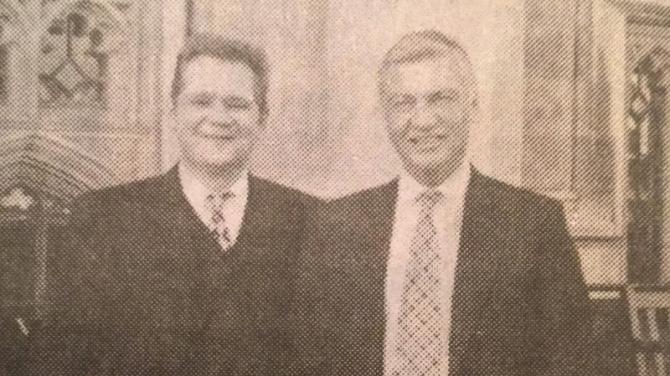 ASK a room of people if they had ever visited London and chances are quite a few hands would be raised.

But how many of them have taken the ultimate thrill ride and clambered to the very top of the capital’s most iconic building? Not many, I’d wager.

Yes, I’ve climbed to the summit of the Elizabeth Tower in the heart of the Palace of Westminster and looked in awe as Big Ben sounded the hour mere inches away.

It was quite a trek. Now, 17-years-on, I suspect I would have to be rescued by a helicopter rather than face those endless, hellish stairs for a second time!

But let’s start at the beginning. They say the past is another country - and in 2003 London was a very different place.

Sub zero temperatures, bomb scares, protestors on the streets scorning the presence of military forces on foreign soil and armed police eying up a sea of faces for some hint of an invisible menace. And they say travel broadens the mind.

Yet that was the scene that morning when the Antrim Guardian dropped in on David Burnside ‘at the office’.

And what an office! After stepping off the dawn shuttle the arresting spectacle of the House of Commons rising from the morning gloom was certainly a sight for red eyes.

Already a firm favourite among aficionados of HP Sauce, nothing quite prepares you for the ornate splendour of the ‘Mother of all Parliaments’ when you get up close and personal.

An integral part of the London skyline, the imposing structure was actually a work in progress until the late 19th century.

A Royal palace has stood on the banks of the Thames for almost 1,000 years - despite the best efforts of Guy Fawkes and co - but the building as it is known today actually rose from the ashes of a catastrophic fire in 1834.

Designed by Charles Barry, ably assisted by Augustus Pugin, it is at turns bright and airy as the most magnificent mediaeval cathedral, then as blackly baroque as a horror film set.

For the uninitiated it’s like strolling into a living, breathing Hogwarts School of Magic, though with so many chandeliers and gold adorning each twinkling cavern one would not be surprised to discover that Liberace had a hand in the decorating.

Ancient tapestries, fine mosaics and priceless paints battle for every inch of wall space, framed by breath-taking stain glass windows, intricate carvings and striking statues of the great men - women being largely conspicuous by their absence - who have earned immortality in bronze and stone.

It goes without saying that the pointing, muttering and craning necks clearly mark the novices from the old hands.

Given the political climate back in 2003, visitors were warned that security would be tight. To be frank, though, I’d seen better.

Bobbies armed with nothing more than smiles kept crime to a bare minimum by politely giving directions and holding open doors. Coming from a province where the cops carried cannons, it only added to the utterly charming other-worldly quality of a building caught in a quite deliberate timewarp.

And that sense was further heightened within minutes of arrival when a disembodied cry of ‘Speaker! echoed down the labyrinth of corridors.

All activity ground to a sudden halt and the crowds parted to make way for the procession to the Commons.

Dressed in their full regalia the Speaker, his Clerks and the Serjeant at Arms - along with the all-important Mace - theatrically made their way slowly, as they did every day, to mark the start of the morning’s business.

Next stop was the Commons itself, where a battle-weary Margaret Beckett manfully fended off questions from the depleted opposition benches. At the back, quite clearly fast asleep under an unruly mop of blonde hair, was the member for Henley. Yes, Boris Johnson snoozed the morning away. Whatever happened to him?

The chamber itself is a surprisingly compact affair - so small, in fact, that was only seating for 437 of the 659 elected MPs.

Parliament has often been described as a bit of a bearpit so I was heartened to discover that the poisonous taunts and schoolgirl sarcasms were every bit as jaw-droppingly rude as I had anticipated.

MPs gleefully hollered and harangued, greeting any sign of weakness with delightful derision - often to the open amusement of their intended targets.

The Commons is also the place to catch the somewhat disconcerting spectacle of highly paid politicians ‘bobbing’ from their seats to catch the eye of the watchful Speaker.

Dignified it is not, but as a spectator sport it’s up there with feeding the sea lions at Bellevue.

But like much else at Westminster, the entrenched sense of tradition may seem out of place in the 21st century - yet somehow it seems to work.

Though there was clearly no love lost between the rival reps, they stubbornly remained ‘Honourable Friends’ during even the most ill-tempered debate.

It was fascinating to watch but time was marching on, so I was steered towards the other chamber, the House of Lords.

The Lords has existed as a counter balance to the Commons since the 14th century. Unlike MPs, the Lords are unelected and unpaid - which perhaps explains why so few were present that day almost two decades ago!

It was certainly nothing to do with the salacious subject matter. That day the Lords were debating the legal implications of the Sexual Offences Bill, with the conversation veering wildly from ‘exhibitionism’ in the garden to a ‘loving relationship’ with the family pet. I kid you not.

Indeed, when one venerable gent pondered aloud about the penalty that should be imposed on someone who gets too close to their dog, one wag suggested he should be ‘given the cat’.

Lunch was an impressive affair too. Think wood panelling, dusty bottles of reassuringly expensive wine and staff standing stiffly to attention with hands behind backs to respond to the diners’ every whim. The food was good too and, since it was subsidized by taxpayers, it was cheap as chips.

If there was any clue what was coming next, it may have been wise to exercise some restraint. After picking up the tab, Mr Burnside revealed that he had one final surprise, and one that would give a new perspective on Westminster - from above!

Yes, it was time to up in the world. Already weary legs would be tested again - 393 times to be precise.

Immediately regretting that second glass of wine I was led to my date with destiny, painfully aware that Mr Burnside had made his excuses and left.

A cheerful guide led the party up the winding staircase skywards. As views go, it was pretty limited - until the huge face of the clock hoved into view, so close you could touch it. Cue the panic-inducing realisation that you really were walking in the air.

And then, just as my heart felt its time had come, the imposing 13.5 tonnes of Big Ben, the famous bell, appeared before me.

And yes, I stood just inches away as it struck three o’clock across the stunning vistas of London.

An exhilarating experience, but there was little time to savour it. What goes up must come down, and I had 392 reasons to wish the builders had the foresight to install a lift for the energetically challenged.

But as the clock’s three metre hands began their inexorable journey towards four, the visit was drawing to a close.

Next stop was Stansted Airport - and a major alert sparked by the discovery of a live grenade at Gatwick. Now the English raised their game in the security stakes as I received a positively indecent search as I waited to board the plane.

As we took off into the thickening darkness back to Belfast International one could not escape the grim irony of leaving behind a city living in fear of terrorist attack.

Perhaps travel doesn’t broaden the mind, but it certainly tightens the waistband - and it did wonders for my thighs!