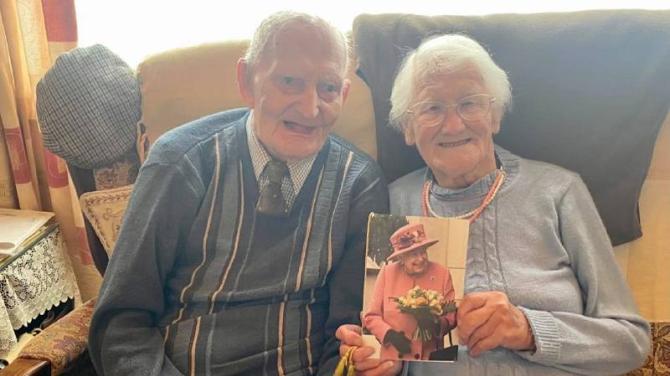 RANDALSTOWN is in mourning after the death of local man Joe Graham in his 103rd year.

Joe and wife Nellie (pictured right) were famous for being one of Northern Ireland’s oldest and longest-married couples, being wed for 78 years after becoming childhood sweethearts at school.

Devoted Nellie was at her husband’s side as always as he slipped away, having tended his every need throughout his long-term illness.

Mr Graham’s son Brian – a former councillor and Mayor of the old Antrim Borough Council - paid an emotional tribute to his father, saying: “So after 102 years, three months, one week and two days, my father Joseph Graham passed away peacefully at home.

“On December 1 past, he completed 82 years membership of the Orange Institution being a member of Taylorstown Temperance LOL 701 – Staffordstown District LOL No.15 County Antrim.

“In his younger days he was a member of the Ulster Special Constabulary and the Royal Ulster Constabulary.

DUP South Antrim MLA Trevor Clarke added: “This has been a very sad weekend as we learned of the passing of centenarian Joe.

“My thoughts are with the entire Graham family and especially with Nellie on the passing of her husband.

“The people of Randalstown have followed the journey of a remarkable couple.

“We all celebrated when they reached their 100th birthdays.

“I know I speak for many local people, from Randalstown and beyond, when I say that we will fondly remember Joe.

“He will be sadly missed.”

Joe is survived by Nellie and children David, Margaret and Brian.

While the house and funeral are private. local people were asked to pay their respects as the funeral cortege travels along New Street on Monday.

Donations in lieu of flowers were asked to be made to Laurel House, Antrim Area Hospita, through Logan’s Funeral Services in Ahoghill.