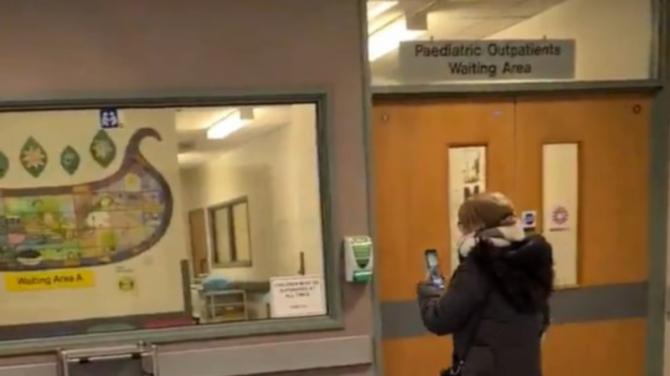 A GROUP of Dublin ‘anti-mask’ COVID conspiracy theorists drove all the way to Antrim Area Hospital last week in a bid to prove that the facility was ‘empty’.

The group posted a video on social media, claiming that their footage showed that the stories of a packed Emergency Department were a hoax, designed to ‘condition’ local people into accepting a lockdown.

The trouble was that the out-of- towners, who seemed to think that Antrim Area Hospital was located in Belfast, toured the outpatients departments at night, long after they had closed for the evening.

Several of the videos even showed a large sign, denoting that they were in various areas of the Outpatients Department.

The hard-pressed Northern Trust was forced to issue a statement saying: “The Trust is aware of footage circulating where someone has filmed empty corridors and waiting rooms in Antrim Area Hospital in a bid to ‘prove’ that the hospital is not at capacity.

“When we talk about being over capacity, we are talking hospital beds all being occupied.

“These beds are in wards, not corridors.

“We are glad to note that corridor and communal areas are not crowded as we too need to adhere to social distancing regulations and do so with great difficulty.

“The pressures illustrated through the media this week were real and not staged in any way and it is ridiculous to suggest otherwise.”