Brooklands residents have a ball! 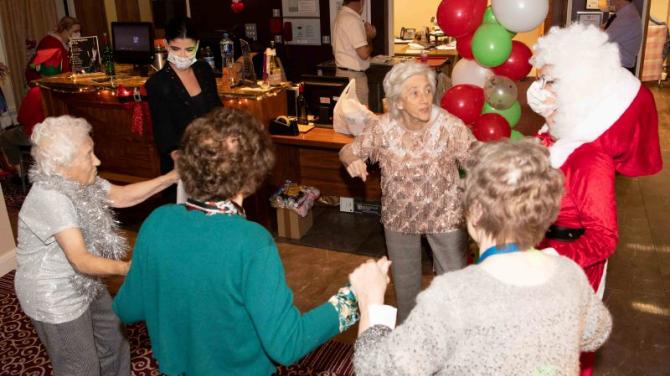 RESIDENTS at an Antrim care home have been quite literally having a ball this Christmas, despite the odds.

After an awful year, staff at Brooklands, which is run by the Conway Health Care Group, decided to pull out all the stops and give clients a night of fun and festivities.

Activity Therapist Bronagh McGlinchey said it was the perfect antidote to a difficult 2020.

“The whole idea came about when staff members were talking about how weird it was this year, there being no nights out for staff, and no outings for residents.

“One suggested doing a ball, and it made so much sense: if you can't get out then bring the night out to us instead! Brooklands is known for its great parties, and we thought why not, let's go out with a bang this year!

“This year everyone needs an extra bit of fun, because it's been such a difficult year.

“Personally as an activity coordinator I felt this was needed.

“If anything, activities became even more needed during this time, as a source of distraction from agitation, to bring about a sense of normality, and to boost spirits.

“Also, the fun doesn’t stop at the door of the nursing home!”

Bronagh said that 2020 has been extremely tough for the residents' families and friends, with many not being able to see their loved ones.

“We’ve been resorting to weekly video calls, which is a substitute, but obviously not the real thing.” she said.

“This is a generation where community was such a natural everyday thing, and when social media didn't exist, so the videos have been strange.

“Despite that, I’ve been surprised that so many took to it as well as they did!

“It says a lot about their generation - they adapted, and kept going through the toughest of times.

“And we’ve seen that again.

“Despite the strangeness of the times, the wearing of masks and everything, they’ve kept going.

“I feel so proud to be working with the elderly-they inspire us daily, with their resilience!”

Bronagh said that the staff have also not had an easy year and she paid tribute to her hardworking colleagues.

“We’ve had a few deaths in the home, which has been so tough.

“During our Covid outbreak, it was heartbreaking, that it had finally come to the home, after seven months of being clear.

“But staff had to step up, and do extra long shifts.

“There were changes in routine, in order for extra shifts to be picked up.

“The managers were absolutely wrecked - they’ve steered us through the toughest of times.

“Many staff have helped out in terms of the party planning, whether it be bringing in food, decorations, costumes which is amazing.”

Bronagh said that she also wanted to highlight the patience and fortitude of residents’ families.

“This is a very sensitive time for the families, due to visiting restrictions.

“But they have been brilliant, with encouragement, leaving in gifts for staff and constantly thanking us and putting up with the restrictions in place.

“We’re lucky to have so many brilliant families behind us.”