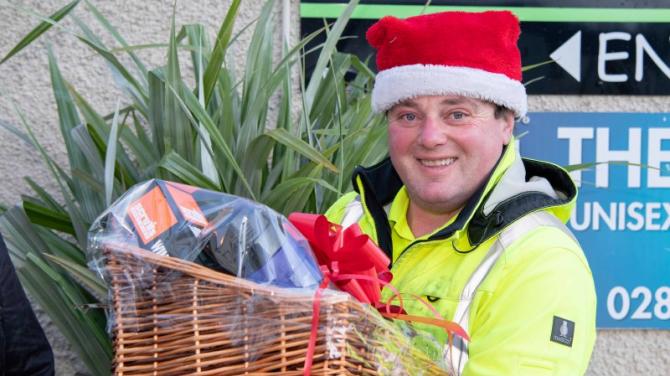 WITH his ever-present smile and jovial wave, Ryan Nicol is arguably one of the best known people in Randalstown.

And, while he may be an Antrim man, he has been well and truly adopted into a town which has taken him into their hearts.

Rain, hail, snow or shine, Ryan never slacks from his role as a street cleansing operative in the town and those on their morning commute are well accustomed to the friendly greeting from the hard worker.

If you bump into him on the street, he always has time for a pleasant word or, if you’re in your car, Ryan won’t pass you by without an enthusiastic wave.

At this time of year, Ryan brings an extra smile to everyone with his bright Santa hat and his cart decked out with tinsel and lights - a true beacon of the festive spirit.

And while last Wednesday morning was somewhat blustery thanks to a yellow weather warning, it seemed to be a day like any other for Ryan as he went about his usual business and duties.

However, that pillar of Christmas and community spirit was about to be very surprised!

He had received an early phonecall from ‘the boss’, asking him to collect bags from Arches Lane in the town at 9.30am.

Heading that way, he was perplexed to see that there were no bags waiting for him.

However, his confusion soon turned to surprise and delight as he discovered that he’d been sent on a sneaky wild goose chase to enable a presentation of a very special Christmas delivery.

He was faced with Alliance Councillor, Glenn Finlay and local woman, Emma Burke who had some wonderful goodies to give to Ryan.

“It was an idea I had about five weeks ago,” Emma explained, as a shocked Ryan tried to gather his thoughts.

“Ryan works so incredibly hard all year round and the whole town loves him.

“He’s the kindest, loveliest soul and I just felt he really deserved something to show him how much we all think of him.

“I started a facebook page and the money was soon coming in for him which just goes to show how well he’s thought of.

“Michael McKay donated the lovely picture of the viaduct and some of the money was used to put together a special winter pack to keep him going through the bad weather - hopefully it will warm him up a bit when he’s working.

“The rest of the money has been presented to him so that he can treat himself - he definitely deserves it.”

“We wanted him to know that what he does certainly doesn’t go unnoticed.

“Ryan is very much a permanent fixture in the town and people love to see him.”

And, it transpired that it was a double whammy for the much-loved worker after he received a beautiful portrait just the previous week from local artist, Harry Boyd!

“What are the odds that so many of us would be looking to say thank you to him,” Glenn laughed.

“The presentation had been in the planning for weeks and it’s lovely that Ryan has really been recognised by so many.

“Christmas spirit really was in abundance!”

And as for Ryan? Once he got over the shock, he was genuinely touched by the kind thoughts and gestures of so many.

“I was surprised to get the painting from Harry Boyd and so this was really unexpected,,” he said.

“I’ll have to get this other picture up on the wall too.

“And I’ll have to speak to my boss, he was going to get an earful for sending me to get those bags but he was in on it all along!”