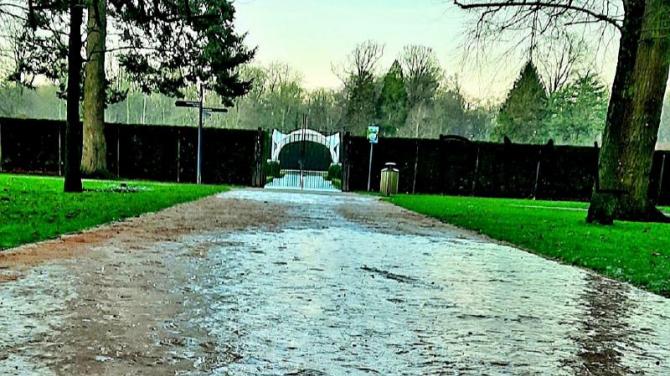 ANTRIM residents have been clamouring for assistance after slipping and sliding their way into the New Year because of the frosty weather conditions.

With temperatures struggling to climb above zero over the past number of days, the snow which fell on New Year’s Eve has frozen solid in some areas, making roads and pathways in some estates absolutely treacherous.

People living in Garden Village, Ballycraigy, Stiles, Grainger’s Mill, Bush Manor, The Folly, Newpark, Springfarm, Town Parks, Parkhall, Carnbeg, Rathenraw, Dublin Road and many other areas across the borough including Neillsbrook in Randalstown reported struggling to be able to walk or even drive because grit supplies were running low over the Christmas and New Year period.

Residents in newer estates and in rural areas say they don’t have access to salt bins in the first place.

Other areas have seen private individuals removing supplies for their own personal use.

There have been numerous reports of people falling and injuring themselves as they ventured out for a constitutional to local beauty spots including Antrim Castle Gardens and the Mill Race Trail.

Pensioners have also been terrified to venture out for fear of slipping and injuring themselves.

Responsibility for filling the bins and salting the roads lies with the Department of Infrastructure or the Northern Ireland Housing Executive, depending on location, and local councillors have been working around the clock trying to pass on residents’ concerns.

Mayor of Antrim Jim Montgomery said that he had passed on 20 queries alone on Monday morning.

Residents can also report direct to the DFI.

Councillor Montgomery said: “I would urge everyone to report it to the DFI if their area is without salt and grit and of course to be extremely careful if out and about, to protect themselves and of course our NHS who are already under immense pressure.”

Salt can be collected from the DFI facility at Loughanmore Road dependent on supply, and people have been advised that they can also use table salt or cat litter in an emergency.