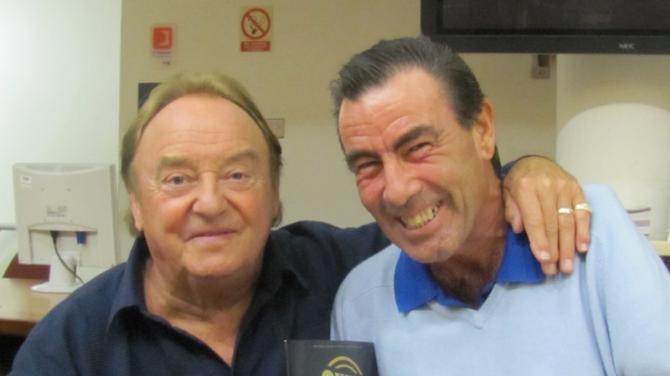 AN Antrim man has paid tribute to the late Gerry Marsden, of Liverpool band Gerry and the Pacemakers, who passed away early in the New Year.

John Condie and his wife, also called Gerry, met Mr Marsden after attending a concert at the Waterfront Hall in 2011.

The band’s well known anthems include ‘You’ll Never Walk Alone’, since adopted by fans of Liverpool FC, and Ferry Cross the Mersey.

“We went to the Waterfront Hall in Belfast to see some of our bands from the 60s and it was a great night bringing back many happy memories of the hits from that era and even though my wife Gerry said she was too young she surprised me by singing all of the songs at the top of her voice!” said John.

Mr Condie, who lost an arm in the 1970s after a motorcycle accident and is well known for his wicked sense of humour, added: “It was one of those nights when a good portion of the audience were either on crutches or in disability scooters although that did not stop them enjoying a great night’s entertainment.

“So it was with deep regret I heard on Sunday night that Gerry Marsden of Gerry and the Pacemakers had sadly passed away.

“He really was a top class entertainer who gave his all on stage and after the show he came out to the foyer to sign autographs and have photos taken with the multitude of fans that stayed to meet him and some of the others.”

“So here is some evidence from the night, October 13 2011, photo courtesy of my wife Gerry and myself.