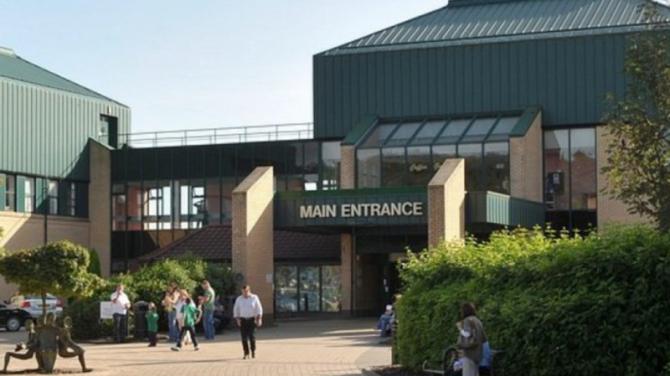 THE story of how a man recovered from coronavirus after a cleaner at Antrim Area Hospital prayed for him is set to be adapted into a feature film for Netflix.

North Belfast pastor Lee McClelland (bottom left) of The Ark Church was left fighting for his life in intensive care in the facility after contracting the virus in March.

Following his recovery, he made a video recounting his experience alone in a hospital bed when a cleaner stood at his door and prayed for him. That same night he claims his condition began to improve and he developed a craving for snacks and soft drinks.

In the video, Pastor McClelland said: “When no one else could get in, God sent a cleaner.

“I asked the Lord, because nobody could get to me, is it possible you could get me a packet of prawn cocktail crisps and a tin of Coke,

“The next morning the cleaner came and he brought in a bag, and in that bag were two oranges, a tin of Coke and a packet of prawn cocktail crisps, Tayto.”

The pastor, who did not identify the cleaner in the video, said the man told him he had been a missionary in Nigeria for 14 years.

“Thank you to that cleaner, you know who you are if you ever see this, thank you for hearing the voice of God and reaching someone like me, who needed a touch,” he added.

The video went viral, attracting half-a-million views on YouTube and being circulated on social media scores of times.

The video caught the attention of DeVon Franklin (bottom left), the Hollywood producer of several Christian films, including Miracles From Heaven, which starred Queen Latifah and Jennifer Garner and is based on the memoir of a woman who claims her daughter was cured of a terminal illness and Breakthrough, which accrued more than $50m at the Box Office.

The as-yet-untitled film could be available to stream on Netflix by next Christmas and a screenplay is set to be penned by Randy Brown, who wrote the script for Miracles From Heaven and 2012 Clint Eastwood flick Trouble With The Curve.

The Sunday Times reported that last week the pastor revealed that he did know the name of the cleaner, but said he wanted to remain anonymous.

He also claimed he had experienced 'a miracle', as he has no lingering health issues as a result of the virus.

He said he had agreed to the film being made because he felt the producer was 'genuine' and would 'put across the point and the purpose and the content of the miracle, and all that happened'.

“It’ll be a story of hope in the midst of chaos,” he added.