Randalstown 'Lynch' pin was the toast of local sports clubs! 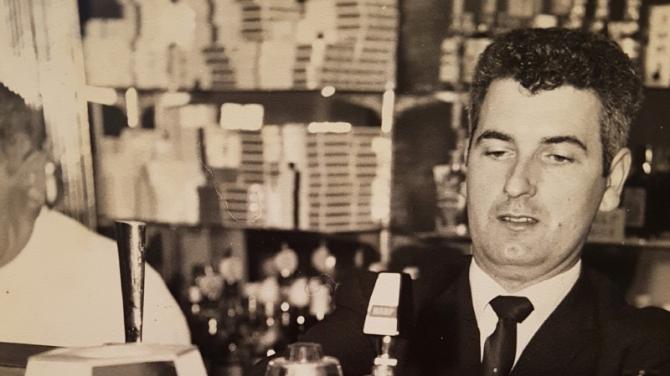 FOR over 80 years, Gerry Lynch has been at the centre of things in Randalstown.

His father was from Scotstown in County Monaghan and came to work in the O’Neill Arms Hotel in Toomebridge in 1934.

It was there that he met Bridget Kennedy and had four children in Toome before the family moved to Randalstown, where six more children, including Gerry, were born and brought up.

Mr Lynch senior had a second-hand furniture shop and was the first business in the town to offer hire purchase, operating from the Market Yard and Sam Booth’s Yard.

He and his boys were a regular sight, pushing an old-fashioned handcart, and the family were even the subject of a fancy dress parade!

“There were lots of other young families on our street and we played in the street and the fields where Neillsbrook is now,” said Gerry.

His father bought the Corner House pub, while Gerry himself went off to be schooled at Randalstown Primary School and St Malachy’s in Belfast.

“I saw my friends making money and going to dances while I had to scrimp and save,” he said.

“So I left as soon as I could and went into a shoe repair shop on the Ravenhill Road while I waited for a job in the civil service.”

However, Gerry’s father took ill in 1959 and he stepped in to run the pub, with his father sadly passing away in 1962.

In 1967 Gerry met Mairead Carey and the pair married, before throwing themselves into the renovation of the Corner House the following year.

“We incorporated Mrs McLaughlin’s sweet and paper shop next door,” said Gerry back in 2019.

“We extended the bar and added a lounge.

“Years ago bars were small and cramped and for men only.

“We recognised that the world was changing and we knew that the ladies wanted somewhere to go in the evenings as well.”

Gerry went on to become heavily involved in the industry, sitting on the Ballymena and District Licensed Vintners’ Association as well as other trade bodies and sports societies.

The Corner House formed a darts team and Gerry has been chair of the Randalstown and District Darts League for 50 years.

A keen golfer, he was also a founder member of the Maine Valley Golf Society, which saw teams from bars in Randalstown travel around the country to play together, as well as playing at Moyola and Massereeene.

The highlight of Gerry’s golfing life was a trip to the Turnberry course just before it hosted the first Open Championship.

The Lynches had three sons and lived above the bar premises.

“The bar was damaged in 1972 by a bomb. All the properties on Main Street were damaged,” said Gerry.

“Our son was one at the time but he and Mairead were able to get out in time.

“There was glass everywhere. We had a terrible time trying to lift all the glass.”

October 1989 saw a bomb in New Street which again, caused damage to windows and doors in Randalstown.

“We had emergency lighting in the bar and it was used as a makeshift medical centre.

“Doctor John Stewart attended and made sure everyone was alright and looked after the sick and injured.

“Mairead made tea. It was chaos.”

Gerry soberly remembers how he used to sit behind a curtain, sometimes all night, keeping watch on the street for any signs of suspicion, so that he could raise the alarm.

“At 5am, Jack Reynolds from the bakery would start to open up and get his ovens going and Col Scott would be getting his paper shop ready and I knew then I could stand down and go to bed.

“One of us always kept an eye on the street. It’s hard to believe now.”

But there were good times, too.

“We had so many parties - the Corner House wasn’t just a bar.

“There were birthdays, anniversaries and weddings, hen parties, stag parties.

“The OC Church had a televised Sunday service and the minister asked if we could cater for the TV crew. They were a great bunch of people.

“Randalstown Rugby Club used our premises as their club rooms and we fed them and their opposition burger and beer!

“It was a packed house. They were followed by the ladies’ hockey team.

“We held many charity functions, overseen by Barney ‘Bookie’ McKay, and many quiz nights, where teams would come from far and wide - Wilsons from Crumlin, the Antrim Coasters from Carnlough and Brysons from Magherafelt.

“The competition was always fierce and Gerry Donnelly was the question setter and quiz master.”

“There was music and dancing late into the night, the keg race took place in the street and we set up a boxing ring at Moore’s Entry with the star attraction, Darren Corbett, the champion boxer.

“Mairead was allowed to try on his belt and we had a great laugh in the darts room afterwards.

“There was also a pub golf outing to Moyola every Boxing Day and the wives would join us for evening refreshments!”

A firm fixture behind the bar was the late Bobby Loughran, who went on to become an SDLP councillor and Mayor of Antrim.

“No one was ever a bit afraid when Bobby was around. He would come out on to the street at night and say ‘there’s not even a dog on the street!’

“He was a great character. When the new houses at The Meadows were built, a lot of young families moved in and they would come over in the evenings.

“At the end of the night he would start rounding people up and shouting ‘last bus to The Meadows, hurry, hurry, you’ll miss the bus!’

“It was only up the road, it was hilarious.

“People used to come into the bar looking for him and he would take them into ‘Bobby’s office’.

“I think he did most of his civic work in the back lounge.

“He got so much done for people. If they needed help with any sort of issue, houses acquired or sites passed - he would have helped anyone.”

Gerry has seen many changes in the bar industry over the years.

“We definitely saw the need to modernise,” he said.

“We never went into food but we were one of the first places to have a large commercial microwave and we got in pre-cooked dinners from a company called SuperDine in Ballymoney.

“There was a big change in attitude to smoking, we invested a lot in smoke extractors.

“Back in those days there was a lot of smoke!

“We were also one of the first to install emergency lighting, which was very helpful in cases like the bomb going off or during storms when people were losing their power.

“We made the bar wheelchair accessible. We actually got a lady in with her chair and asked her for advice about the best way to adapt the place, so we put in a sloped floor and widened the doors.

“We replaced the pitched roof with a flat roof - I remember the day the crane came and people all gathered to watch, it was some spectacle!

“The flat roof meant we could hang the washing out and we put out a big cast iron barbecue.

“During the big Boxing Day storm in the late 1990s, the wind lifted it and put it down 30 feet away!

“Everyone mixed well at the Corner House and the banter was brilliant.

“It was a central hub. There was a particular gathering of characters on a Thursday night who would bicker about their favourite sports teams.

“You’d think they would end up fighting over Manchester United versus Liverpool, or Down versus Tyrone, but it was all good-natured, people would turn up on a Thursday night just to listen to the banter.

“There was a big change when the off-licences started selling their businesses to the supermarkets.

“We were a community pub and we knew all the local people well.

“No one ever drank behind the bar and if someone was overdoing it, we stopped serving them. If they had a car with them, we would take the keys.

“There was many a night either myself or another staff member would take someone home in our own car, or drive their car and get their wife to bring us back.

“People looked out for one another. These days, the young ones are looking for a party to go to, so they will just buy alcohol and go to someone’s house.

“Yes, it might be cheaper, but there is no sense of community and no one is looking out for them.

“I got a real shock going over to England and on the dot of 11pm, the towels would go over the pumps and that would be it - drink up and get out!”

After retiring from the bar and selling up in July 1999, Gerry threw himself into volunteering, most notably with St Vincent de Paul and Tidy Randalstown.

For his efforts, he has been rewarded with an Antrim Community Excellence Award for volunteering in 2014 and a Spirit of Volunteering accolade from the Council in 2016.

Gerry also dabbles in DIY and has been a familiar face in the Antrim Guardian, handing over cheques to various charities.

“I do wee bits and bobs for Tidy Randalstown and I am pleased they have picked up so many awards, it is a real team effort,” he said.

“St Vincent de Paul is a charity very close to my heart, and Macmillan as well.

“We also raise funds for the Kevin Bell Repatriation Trust, which does fantastic work.

“For me, I always felt like I was volunteering anyway,” he said.

“I was always driving someone home or putting on an event or something, so the move into voluntary work wasn’t really a big thing for me as I felt like I was already doing it.”