After the chaotic scenes at Capitol Hill, Irish eyes are finally smiling 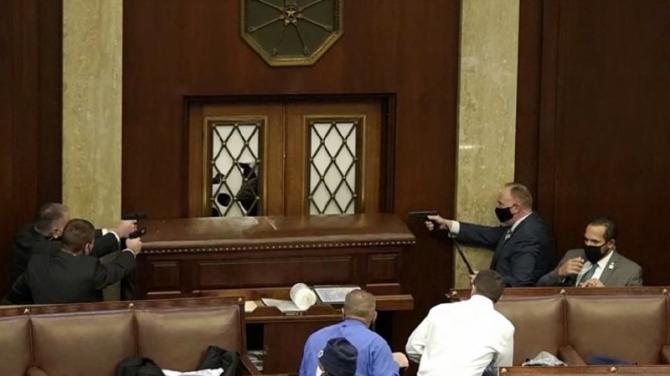 AND so the Donald Trump soap opera rolled to a dramatic, yet somehow predictable, conclusion.

The reality TV star’s time as President came to a surreal end as chaos reigned at Capitol Hill on Wednesday.

The stage was set when Trump rallied the faithful to take part in a mass rally in Washington to coincide with Congress formally passing the baton to Democrats Joe Biden and Kamala Harris.

True to form, the outgoing Commander in Chief added fuel to the fire, reiterating that his ‘landslide’ back in November had been stolen from him and urged his followers to march on Capitol Hill.

The rabble roused, they did precisely that sparking unprecedented scenes as flag waving Trump supporters smashed through the conspicuously flimsy security to stalk the halls at the very heart of American democracy.

Five people died - one shot by police, three from ‘medical emergencies’ and a policeman.

As spectacles go, it was deeply unsettling. Trump had single-handedly exposed, some would say exploited, the naked tribal fury lurking close to the surface in a deeply divided United States.

The Presidency he had fought so hard to hold onto was doomed to end in ignominy, his legacy forever tarnished.

To their credit, Congress reconvened after the violence and worked through the night to ratify the Biden/Harris victory.

Though the celebrations were muted by the grim events that had unfolded, Irish eyes were certainly smiling.

Joe Biden has spoken many times of his Irish ancestry. His great-great grandfather Patrick Blewitt was born in Ballina, County Mayo, in 1832. Patrick left Ireland in the autumn of 1850 to settle in America.

And local historian Stephen McCracken uncovered Irish links to his running mate too - and that path leads right back to Antrim.

He had been researching the direct link between Randalstown and President Woodrow Wilson and between Ezekiel Vance - the saviour of Antrim during the 1798 rebellion - and President Andrew Johnston.

But he did not expect to find a connection between Kamala Harris and the county town.

Vice-President Elect Harris, a former Attorney General of California and District Attorney of San Francisco, is of mixed race. Her father is Jamaican and her mother is from India.

It has been reported that her four times great grandfather was a man called Hamilton Brown.

And Hamilton was born in Antrim in 1776.

According to the Senator’s father Donald Harris, a retired Stanford University economics professor who emigrated from Jamaica in 1961, the Harris family descends directly from Brown, who was a 19th-century slave owner.

“My roots go back, within my lifetime, to my paternal grandmother Miss Chrishy (née Christiana Brown, descendant of Hamilton Brown (Antrim) who is on record as plantation and slave owner and founder of Brown’s Town and to my maternal grandmother Miss Iris (née Iris Finegan, farmer and educator, from Antrim Town and Inverness, ancestry unknown to me).

He represented Saint Ann Parish in the House of Assembly of Jamaica for 22 years.

A man of considerable means, he gave his name to Hamilton Town in Saint Ann Parish, now Brown’s Town.

He even named one of his sugar plantations ‘Antrim’.

He started his career in Jamaica from humble roots as an Irish emigrant book keeper but he soon realised that the plantations were the best route to personal wealth.

It was difficult, back-breaking work - but the burden was lessened considerably if the labour was carried out by slaves.

And the Antrim man had no moral objection to that. A religious man - he built the original St Mark’s Anglican Church where he worshipped - he was nevertheless unapologetic about the subjugation of others.

In later life he would argue that slaves in Jamaica were better off than the poor in England, and therefore the British Government should not interfere.

Arbitrary whipping of slaves was witnessed at his plantations.

Some girls as young as 12-years-old were flogged between 40 and 50 times with a horse whip, for supposed misconduct as trivial as over-sleeping or not meeting their assigned work targets.

In one case, a man was whipped 39 times despite not having committed any discernible ‘offense’ — rather, one planter had him flogged as a method of petty revenge against the slave’s owner, for some unspecified sleight.

These findings about the conditions of life for slaves in Jamaica could not have been further from the outlandish claims made by Brown and his fellow colonial settlers.

After the abolition in 1833 Hamilton recruited workers from across County Antrim. Scores of them set sail for Jamaica in one of Brown’s ships.

They eventually settled in Saint Ann Parish and worked the Brown estates.

In 1840 he embarked on a further failed mission to try and bring more people from the ‘old country’, however his efforts were widely condemned for ‘making slaves of the migrants’.

The memorial to him reads: ‘Sacred to the memory of HAMILTON BROWN Esq. Native of the County Antrim, Ireland who departed this life on the 18th Sept 1843 in the 68th year of his age. He was the FOUNDER OF THIS TOWN. Was 22 years one of the Representatives for this parish in the Honourable. House of Assembly. His name will long be cherished’.

I suppose it depends who you ask.

A few years when Barack Obama ran for President an article was circulated by a local Dublin paper confirming his Irish Roots.

This set in motion a tour of Ireland and having that famous pint with his relatives in rural Ireland.

Perhaps Vice President Harris will do the same and visit the award winning Castle Gardens or have a pint in any one of the public houses in Antrim!

Kamala Harris initially sought the Presidential nomination in 2018 for the 2020 race however dropped out in December 2019 after a string of fiery exchanges against Joe Biden on race related matters.

She continued to maintain a high profile, notably becoming a leading advocate for social-justice reform following the May 2020 death of George Floyd, an African American who had been in police custody.

Her star is certainly in the ascendancy - but will the question of her heritage play a role?

While the Senator’s father is an impeccable source, they have followed the paper trail to investigate his claims - and at present the file has been marked ‘unproven’.

“There is no doubt that Hamilton Brown was a prominent plantation owner in Jamaica during the first half of the 19th century, owned slaves, and also advocated against the abolition of slavery and sought to downplay the difficult working and living conditions of slaves in Jamaica,” they say.

“However, we have been unable to verify that a line of descent exists between the modern-day Harris family and the 19th-century slave owner.

“As such, the claim that an ancestor of Senator Harris owned slaves in Jamaica remains unproven. If evidence emerges that verifies that line of descent, we will update this fact check accordingly.”

They do not rule out that possibility, but have warned against using the link for political gain.

“Even if it is the case that the Harris family, by way of Christiana Brown, are descendants of Hamilton Brown, those who seek to attack or undermine Senator Harris for the wrongdoing of a man who died almost 200 years ago should first gain a better understanding of the often complicated, traumatic histories of black families in the United States — and tread much more carefully,” they say.

Nevertheless, Donal Kelly of Antrim Town Tours said, if true, it would be exciting news for the town.

“I was delighted to hear about this link and it will help to highlight the fantastic history and international connections Antrim has all around the world.

“This new discovery with Kamala Harris`s ancestor coming from Antrim can only bolster our tourism offering especially in the very important US market.”

The new incumbents will formally take up office on January 20.

With the Democrats winning two seats in last week’s Senate run-offs in Georgia leaving both sides with 50 members each, Kamala Harris as Vice-President will have the casting vote on divisive votes.

And of course, she could be promoted to the top job itself if 78-year-old Joe Biden suffers ill health during his term.

There is a huge job ahead, but both will be keen to heal the wounds of a grievously injured body politic.