The heroic Antrim couple who tested their mettle on 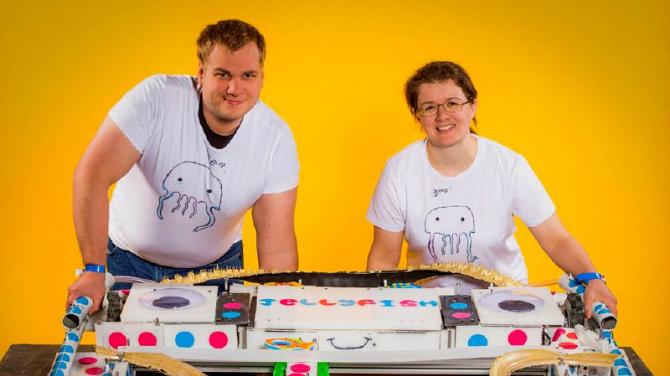 REMEMBER the Second Great Robot War? That glorious period between 2016 and 2018 when the BBC recommissioned the iconic programme ‘Robot Wars’ after a twelve-year hiatus, and intense remote-controlled combat once again dominated primetime television?

If a confused expression flashed across your face - or if you plainly answered ‘no’ - the basic premise of ‘Robot Wars’ was as follows: teams of ‘roboteers’ would pilot their hand-crafted, armed and armoured radio-controlled machines in an effort to overcome the myriad of hazards scattered around the playzone and, of course, the other crews vying for victory.

In essence, it made for a heady and exhilarating mix-up between a Scalextrix RC race car crash infused with the faintly edgy aura of a fictitious underground blood sports ring.

Back in 2017, the pair qualified to contend in the first heat of ‘Robot Wars’ ninth series, under the menacing moniker of ‘Team Die Gracefully Robotics’- or ‘Team DGR’ for short.

By that time, Mr Lawrie was already a seasoned veteran of the mechanised carnage of the ‘Robot Wars’ arena.

One year previously Dave had participated in the programme’s eighth series, helping design and control a robot named ‘Nuts’.

But the following year, Dave decided not to re-enter the competition with his old ‘Team Nuts’ comrades, opting instead to form ‘Team DGR’ with his wife, Gemma.

Despite possessing no prior engineering experience, Gemma was no stranger to television herself - in fact, Gemma and Dave first met on the set of another BBC series, ‘Total Wipeout,’ in which they both gamely attempted to brave its notorious obstacle course.

Together, Dave and Gemma created one of the most unique robots to ever feature on ‘Robot Wars’, an idiosyncratic machine designed in part to be built and fixed with the most rudimentary tools possible.

They named their creation ‘Jellyfish.’

An 85kg machine only 17cm tall, Jellyfish was, admittedly, about as intimidating as a baby turtle.

Where most crews opted to paint their robots with fearsome fangs or in vivid toxic-toad colours, the 1.2-metre-long Jellyfish was resplendent in red and blue polka dots, complete with a mawkishly drawn smiling mouth and pair of lolling, googly eyes.

It resembled what might occur if a time-travelling Mr Blobby was on hand to help the Wright Brothers design their flimsy first airplane.

And, where most other competitors armed their bots with a formidable array of axes, flippers and circular saws, Jellyfish was armed only with a huge clamp designed to ‘hug’ its opponents into submission.

Nonetheless, Dave was confident of a triumphal outcome.

“A group of jellyfish is called a smack. We’re coming to ‘Robot Wars’ to lay the smack down!” he asserted in the team’s introductory video tape.

Unfortunately, it didn’t quite pan out that way.

Facing off against three other robots in the first heat - ‘Rapid’, ‘Terrorhurtz’, and, in a cruel twist of fate, Dave’s old teammates driving a spruced-up variant of ‘Nuts’ - Jellyfish simply refused to move when the round began. It was a sitting duck.

“Upon ‘activate’ Jelly barely responded to my transmitter. Sometimes he drove without input, sometimes he caught my signal, sometimes he stopped completely,” said Dave after the round.

“Add in the three other machines trying to write us off and it simply became a battle of survival.”

It was a fiasco for Team GDR as they watched their unresponsive, listless pride and joy take an absolute thrashing.

Jellyfish was flipped, flung against walls, axed, and even roasted over a conveniently sited pit of flames.

By the time the mangled automaton was counted out of the competition, it lay battered and immobile in the arena, half-blinded by the loss of one of its trademark googly eyes.

The Jellyfish experiment proved that if you build a robot markedly larger than those operated by the other competitors, there is simply more of it to hit. It was akin to watching a diplodocus fruitlessly fend off an attack by a pack of velociraptors.

But Jellyfish wasn’t finished yet.

After some impressively hasty repairs to the broken bot, Dave and Gemma braced themselves for a final round in the hopes of securing a place in the Heat Final.

And, this time, the luckless robot actually tasted some success.

“That’s it! Jelly’s having his cuddle!” Gemma was heard to cry as Jellyfish’s wide clamps embraced ‘Sabretooth’ and steered it close to the flame pit.

The two machines became ensnared in a tight melee that eventually resulted in a stalemate - and a judges’ decision.

With the vote 2-1 in favour of Jellyfish, Antrim’s Team GDR had won the battle - but not the war.

Alas, Dave and Gemma’s efforts were not quite enough to qualify for the Heat Final. Jellyfish’s tour of duty was over.

“I won a fight on Robot Wars. I am super proud of this fact and seeing my 2 points up on that board was life-affirming but it is certainly not something to gloat about,” Dave recalled humbly.

Sadly, Team GDR were not to return to the famous ‘Robot Wars’ arena.

An application to compete in the tenth series of the programme with an upgraded model named ‘Jellyfish and Ice Cream’ was declined by the BBC, and ‘Robot Wars’ itself was once again cancelled in 2018.

But, with streaming services coming in to their own in the wake of another lockdown, the entirety of the rebooted series can be rewatched via the BBC iPlayer.

And that’s good news for anyone who missed the initial airing of the two plucky go-getters from Antrim who transformed defeat into victory!