You're in the army now! 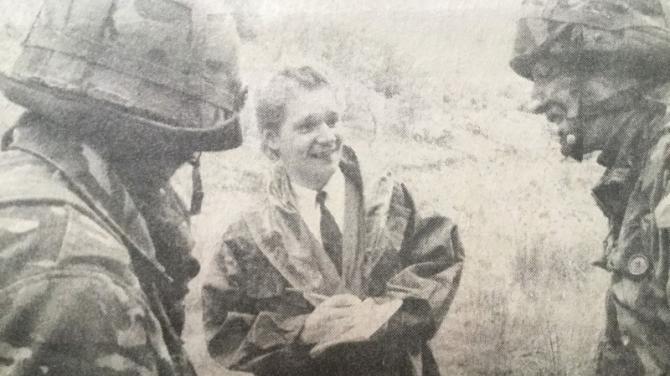 MOST people harbour one guilty ambition, one secret calling that would have made their lives complete.

But my dream has always been altogether more down to earth but, I had always thought, no more attainable for that. So it was with some trepidation that I learned it was to become a reality. I was to shed my ‘civvies’ and join the lads. I was going to be a soldier.

My one day tour of duty began at 4.30am when I got the bugle call to set off to join my brothers in arms from Antrim’s Steeple Barracks on a training exercise in the Scottish Highlands.

It would be hard going, they said. It would be muddy. It would probably be raining. Good. That’s the way I wanted it.

I yearned to clamber through trees, to walk knee-deep in stinking swamps and live off the land until my limbs screamed for rest and my pores begged for soap.

During the flight to Glasgow I suppressed the urge to throw myself from the plane like my comrades in the Paras. But no, that was not my style, for I was to forsake the glamour of the air and join the artillery as an honourary member of the Royal Irish Regiment.

Soon the fearsome peaks of Ardgarden Forest hung menacingly over the skyline as the army transporter roared along the winding tracks to my first rendezvous of the day at the main base.

As I stepped onto Scottish soil I found myself ankle deep in thick black mud which wrestled in vain to suck the shoe from my foot. I’m home at last, I thought ecstatically.

Then the onslaught began as thousands of insects jostled for position to strip the flesh from my bones. I later learned from an affable Commanding Officer that the swarm, who had been dubbed 633 Squadron, really was a problem at ‘Little Africa’, striking horror into even the most hardened soldier.

“They are a ruthless Battalion and we are their rations,” he said - and he was only half-joking.

Some enterprising troops had found a solution, by putting tights over their heads. It was a look that would not have gone down well back in Antrim!

“One pair does three men,” said one knowingly. Others opted for a thick, greasy insect repellant which was smeared over all edible extremities.

In a bid to end the air superiority of the buzzing menace I gratefully buttered myself in the cream, but I would have preferred the war paint that was modelled on the faces of everyone else in the camp.

A Quartermaster then led me aside, barely suppressing his amusement. It seemed that my natty new suit, shirt and tie was perhaps ‘not the best gear’ to wear into the dense Scottish jungles.

Any protestations were quickly strangled in my throat when he offered me a full set of camouflage army fatigues. They were at least five sizes too big, but I would grow into them.

My first port of call was to the field hospital which, I was shocked to learn, had more in common with a modern casualty unit than the blood-soaked tents I had expected after years of watching M*A*S*H.

The doctor explained that most of the injuries were associated with falls and strains, caused mainly by a combination of running across rough terrain with 60 pounds of equipment strapped to their backs.

Unable to hide my surprise that they only carried a mere 60 pounds I turned to a local man I was sure would be no stranger to pain - the architect of many an agonising meal, the camp’s cook.

I was therefore more than a little dismayed to learn that this could not be further from the truth.

Contrary to all expectations, Private Graham Norman from Antrim was regarded as something of a culinary genius, regularly concocting gastronomic masterpieces that would have had Lloyd Grossman salivating.

So it was with some reluctance that I approached to enquire why he took the plunge and joined the Royal Irish.

It emerged that he was born in Bath but had moved to Antrim in 1982 because of a fondness for the town, as well as a more specific fondness for a local girl!

I learned that romance had brought many an Englishman to town, and most stayed on. I nodded sagely. I suppose even warriors need a break from fighting from time to time.

Speaking of which it was finally time to take to the field to join my comrades. I was escorted into the wilderness to Tactical HQ, the nerve centre for the Regiment’s signallers and radio operators.

Once there I met Corporal Tom Montgomery, who had been based in Antrim for many of his 19-years of service. He was no novice to exercises like these, having trained in Canada and Germany, but he feared that this could be among his last.

Apparently a question mark was hanging over his future because the Royal Irish, like the rest of the army, only permits its men to serve for a maximum of 22 years after which they must stand down. And that was a daunting prospect for a man of 37.

Tom was philosophical about it, though. He knew there was no room for sentiment in the forces. And of course he was right - mountainous terrain was no place for walking frames.

Soon I was leaving too, embarking on a trek to meet the men who had already spent three days sleeping in this forbidding forest in the middle of nowhere.

We fought our way through the deep undergrowth, down muddy ravines and along fantastical waterfalls, fully aware that though we could see no-one, hundreds of human eyes were boring into our backs.

Eventually we came to a clearing and saw dozens of vaguely human shapes hugging the landscape. Among them was 25-yaer-old Antrim man Lance Corporal David Nimick who readily admitted that he was enjoying the challenge of the exercise, keeping in remarkably high spirits despite only stealing ‘four or five hours’ of sleep a night.

It was a new experience for him and he was enjoying it, though he admitted it was a ‘hard slog’. The worst thing was not the cold or the damp, it was the absence of home comforts.

His senior officer Colour Sergeant Stewart Hawthorne also hails from Antrim and he candidly admitted that the conditions were much worse that he had expected - especially the unrelenting advance of Squadron 633.

Without a trace of irony he revealed that he had been compelled to sleep with a piece of cloth tied around his head to prevent being rendered unrecognisable during the night.

The Lance Corporal noticed that I was eyeing up his rifle jealously so after removing the cartridge he passed it to me to look down the sights.

In raptures I grabbed it and was immediately struck by how heavy and uncomfortable to hold it was. I also became aware of the damp that was seeping through my clothes and into my bones.

It was then I finally accepted what I had always suspected. Army life is not glamorous, and it was certainly not as much fun as I had imagined as a kid rolling around a field with pals popping off imaginary shots with my trusty piece of wood. No, this was hard work and it was deadly serious.

Sitting there with two of my townsfolk in the middle of an untamed Scottish wilderness, I suddenly realised that the old cliches were not true.

Above my head the helicopters buzzed from a distance, letting rip with sporadic bursts of gunfire. It was like a massive, living Vietnam moving - and I knew I would never play a part.

But after hours on my feet I was keen to take part in lunch and my colleagues were more than happy to oblige. I was handed my rations which I expected to contain such old faithfuls as bully beef and powdered egg, so it came as something of a surprise when I opened it to find a veritable Alladin’s Cave of goodies.

There was everything from chocolate and soup, to bacon and pasta and it was all surprisingly good. Having gone through the bizarre ritual of eating Italian meatballs in tomato sauce in the middle of a forest, the lads talked about their feelings about the exercise and its bearing on the changing face of the Royal Irish.

The Regiment was born out of the merger of the Royal Irish Rangers and the UDR in 1992 and for years their work has been largely to help the RUC maintain internal security in Northern Ireland.

But the ceasefires meant that their role has had to keep up with the time, hence greater emphasis on conventional exercises. For soldiers trained in combating terror, the transition can be difficult.

Colour Sergeant Hawthorne explained: “When we first arrived here, some of the men thought that we had been dropped in at the deep end.

“We had some training, but we were not prepared for this. It’s a nightmare. Morale was quite low, but we are beginning to adjust to the new demands thrust upon us and we’re really starting to get into it.”

Senior observers on the field have noticed a change in the men too.

Brigadier Seymour Monro told me that he was ‘very impressed’ by the local troops.

“These men are leaning in the field and it’s proving to be very productive and will make them better prepared for their future role,” he said.

This was echoed by none other than Major General Anthony de Leask, the Commander of Land Forces, who also found time to shoot the breeze with the Antrim Guardian.

“You can see what has been achieved here. The men have to get out of Northern Ireland from time to time to train and face new challenges. That’s what this is all about and they seem to be doing very well.”

Some have thrown themselves into it more than others. Lance Corporal Tony Smith from Antrim and his colleagues were so keen that they were ordered to move further up the hill because they were frightening civilian passers by with the intense noise.

“While people at home are familiar with the sight of armed soldiers on the streets, they tend to be more startled over here when they see the bushes bristling with rifles!”

Boundless enthusiasm clearly helps, and Lance Corporal Ian Williams has that in abundance. He joined the Royal Irish and moved to Steeple Barracks in 1990 and never looked back.

“Soldiering is what I’ve always wanted to do and it is a good life if you can put up with the hardships,” he said.

Two other Antrim men, who preferred to be known as Privates Christian and Skill were under no illusion that their trip was not a holiday, but a hard job of work. They were equally realistic about the implications of a cessation of violence at home could have on their careers.

“With the ceasefire well into operation our whole way of training has had to change in line with the rest of the army. If we are to be brought into line with the others we may have to face the fact that we may be scaled down like other Regiments.”

Asked how badly they would take this, one retorted: “It depends if I lose my job.”

The Commanding Officer of the Royal Irish in Antrim, Lieutenant Colonel Charles Sloan suggested that pessimism was premature. The Regiment was, he said, an ‘insurance policy’.

* Since 1995 the Royal Irish went on to see action in theatres of war around the world including Sierra Leone, Iraq and Afghanistan. They were awarded the Conspicuous Gallantry Cross by the Queen in October 2006. Since the ceasefires, manpower has steadily declined through amalgamations.