George Graham, the 'blow-in' who is now 'part of the fabric' in his adopted town! 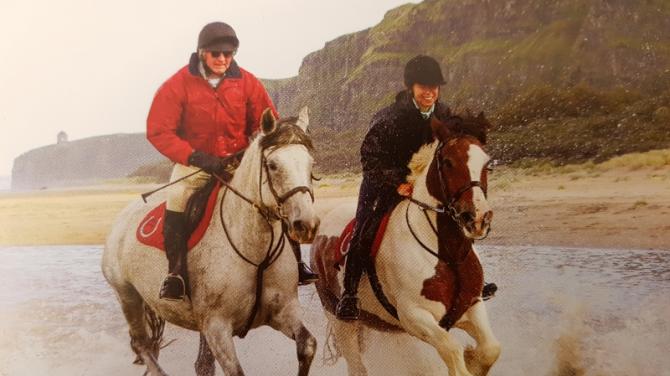 HE’S perhaps best known for being a stalwart of the Old Bleach Linen Company and chair of the Randalstown ARCHES Association.

But never one to sit still for long, George Graham has many more strings to his bow.

He was born in Bellaghy in 1947 and went to Rainey Endowed school in Magherafelt before taking up an OND in Engineering at Ballymena ‘Tech’.

“I didn’t enjoy school much,” he told the Guardian a few years back.

“I remember my classmates being asked to draw a picture of ‘Mrs Graham bringing George to school with a cane’ so I suppose that says it all!

“I grew up in a family running a country business. We sold meal, coal, fertiliser, but I wasn’t interested in the shop side of things, I wanted to be out on the lorry, making deliveries.”

Admitting that he has ‘always been tinkering’ with stuff, George enjoyed making and racing go-karts as a young man and also became a big fan of sailing, first taking to the water on the River Bann at Newferry.

He went on to win many competitive races at local, national and European level and enjoying happy days on Lough Neagh with his best mate Marshall Moore.

In his 30s he took up wind-surfing.

“I was very practical, I always loved doing things, making things,” he said.

George was a founder member of the current Antrim Boat Club in the late 1960s.

He came to Randalstown for love, and although his first marriage did not work out, he stayed and remarried Sharon - and discovered a whole new hobby.

“Sharon was very into horses and ponies, so at the age of 50, I got on a horse for the first time.”

And George has never looked back.

Along with Sharon and their two daughters, George has immersed himself in the equine world and the family still has five horses and ponies living at home.

At one time he was so heavily involved in the Pony Club, George facilitated a full-scale arena and a club house in his own grounds.

He is also part of Antrim Chase, which organises charity rides.

In the 2017-2018 season, the organisation raised £7,000 for local charities including Marie Curie, Water Aid, Multiple Sclerosis, NI Children’s Hospice, Friends of the Cancer Centre, Guide Dogs for the Blind and Spina Bifida.

“We have a great relationship with landowners, all the rides follow a pre-planned route so there is never any damage or trespassing, and they are so happy they usually offer us more land for the next time!”

There is hardly any space on the walls or surfaces of the Graham residence, as they are full of photographs (George can still name every horse and pony), trophies, rosettes and other mementoes from several decades of successful competitions.

The Graham girls were trailblazers in the Pony Club games scene and picked up armfuls of silverware from events all over the UK.

“We built this house ourselves and I think for the girls, it was an idyllic way to grow up,” said George, at the kitchen table of his Ahoghill Road home.

“It has been great to have an interest which keeps us together as a family, something we can all do and enjoy with each other.”

George was also among a group of riders who provided one of the most memorable sights of the Giro d’Italia’s visit to Northern Ireland back in 2014.

The sight of horses and riders running beside the bikes along the County Antrim coast was beamed to over 160 countries around the world.

George and the other riders timed their run to perfection, running along the beach at Carnlough, adjacent to the cyclists.

Despite being a self-confessed ‘blow-in’, George also became heavily involved in community work.

The ARCHES Association (Assisting Randalstown Community towards Harmony and Economic Success) was formed in the mid 1990s.

The town had suffered through the Troubles and despite its history, textile industry heritage and impressive architecture, had largely been forgotten in the eyes of the Northern Ireland public.

There were a number of gap sites and the whole area was decidedly neglected.

George and a number of other volunteers helped form the group in 1995 and ARCHES has been instrumental in transforming Randalstown into an award-winning tourist destination, with strong community spirit.

“When I came to Randalstown I realised that all the characters were the same,” he said.

“In Bellaghy we had local characters and Randalstown was just the same.

“It made me realise how important the community was and how we should never lose that sense of who we are, how we should preserve that and never lose it, I thought, every village and town in this country must have the same characters, and how wonderful that was.”

George was particularly keen on securing funding to improve the infrastructure of the town, and one of his proudest achievements was his involvement in rejuvenating the Charles Lanyon-designed viaduct, which was built in 1856 to extend the railway from Randalstown to Cookstown.

The top of the viaduct and part of the railway track were converted into a walkway and cycle path.

As part of the ‘Pathways to Peace’ initiative, the walkway on top of the viaduct links both sides of the community in Randalstown, from Station Road across to New Street.

The opening ceremony for the works saw an Orangeman and a representative from the Ancient Order of Hibernians walk from opposite ends of the viaduct to meet in the middle, at a ceremony opened by the late Lady Georgina O’Neill.

George said: “It’s been great to see what has been achieved through teamwork and it is also good to see younger people taking an interest too.

“It can be hard to get new people into community groups, but in Randalstown, I think people realise how important this sort of work has been.

“The Tidy Randalstown group took on a lot of our early work and they have brought fantastic recognition to the town. I don’t know where Helen Boyd and her team get their energy from!

“ARCHES itself is now more focused on education and funding and the most recent initiative is into supporting people on the autistic spectrum and their families.

“As well as the person, we also want to offer support to parents and siblings and we are running a series of meetings to garner interest in future programmes and see what we can do to help.

“We have always been very grateful to our funders, including the council and Enkalon Foundation and the European bodies, for making these things happen and allowing us and other groups to invest back into the community for future generations.”

Also part of the ‘fabric’ of Randalstown was the Old Bleach linen company, for which George worked happily for 35 years.

The Old Bleach company was started by quaker Charles J Webb in 1864.

By the 1930s the company was a large textile manufacturer employing a workforce of over 1,000 people, using the nearby railway to help export their textiles and linens all over the world.

As the company expanded, they were also one of the first companies to perfect screen printing of designs on to textiles.

In 1971 the company was acquired by Carrington Viyella and production in Ireland and the trade name ‘old bleach’ continued after the buyout throughout the 1970s.

Old Bleach employed generations of families and the name persists through a number of sports and social clubs.

At the start of the 1980s the Old Bleach mill was closed as part of cost saving by Carrington Viyella as the luxury linen industry declined and demand turned to cheaper man made fibres imports.

The mill was left disused until most of the buildings were eventually demolished in the 1990s.

“It was a great place to work, I made so many friends and I was very happy there,” said George.

“Getting the OBE for services to industry was totally unexpected, although it was a great day out for the wife and kids!

“I enjoyed every moment of my working life, it did not seem like a job to me.

“I received a letter from the MD of a French company with whom we enjoyed a 12-year working relationship.

“His factory had been at risk of closure when the order was made, but orders were 100 per cent complete and delivered early.

“One order could increase sales by 25 per cent and reduce stock by 20 per cent.

“I helped turn around a factory at Maydown on the outskirts of Derry and I was given the job to open factory shops, which I did. There were 13 in Wales, England and Northern Ireland - there were three here, one of which was at Maydown.”

Retiring, it seems, must have been a wrench.

“We have a place in Donegal so I spend more time there and while I am still on one or two committees, I am trying to scale things down a bit and make more time for myself and the family.

“It is hard for me to relax but I am trying my best!” George laughs.

“The best thing about living in this part of the world is quality of life.

“The girls have been in England for university and work and it is important to travel, but if it is 5.30pm and I’d just finished work and the wind was getting up, I could call Marshall and we could be on Lough Neagh in half an hour.

“We have all that on our doorstep and we shouldn’t take it for granted.”