I was mugged by Ian Paisley! 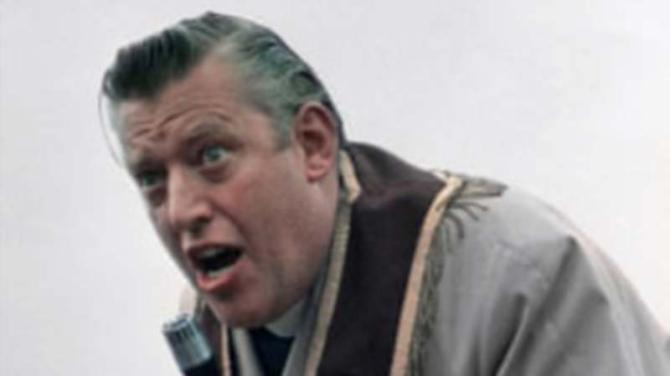 YES, I was once ‘mugged’ by Ian Paisley - well, after a manner of speaking.

It was the mid to late 1990s. And it happened in broad daylight. In front of an appreciative crowd.

It has long been a tradition at election times for the political heavyweights to tour the provinces to bolster the chances of their candidates at the hustings.

And few carried quite the punch as ‘the big man’.

So it was with some trepidation that word filtered through that the Paisley bandwagon was coming to town - and the venerable Dr had agreed to see us now.

With notebook in hand, I set off in pursuit of a scoop.

In the event I heard him long before I spotted him, that loud distinctive roar cajoling passersby to give the DUP their vote.

I caught up with them on Church Street and he seemed less than impressed by the young reporter selected to grill him. With hindsight, perhaps I was just too ‘green’ for this seasoned campaigner.

As we approached the Boxing Club he paused, turned on his heel and fixed me with that terrifying glare.

“Well young man, what do you want to know?” he bellowed.

For my part, I decided to go for the jugular with some probing questions from the very top drawer.

“Err, Dr Paisley, what sort of reception have you had in Antrim? How do you think the election will go?”

I had him on the ropes, and he knew it. In that moment he clearly realised that I shared more than a Christian name with Jeremy Paxman!

At first his reply was amiable enough, but soon his presence was gathering a bit of interest. A few people stopped to listen. And then a few more. Soon we were encircled by 20 or more - and then the gloves came off.

In those pre-Good Friday Agreement days, the DUP were still very much in the shadow of the Ulster Unionists. Much to the annoyance of Mr Paisley.

The blame for that, he reasoned, lay with the media. And since I was the closest thing to a reporter within hollering distance, I took one for the entire team.

He began railing against the press, with each barb punctuated by a pointed finger in my general direction. More people gathered as he reached fever pitch, eyes on stalks, with a throaty crescendo of such ferocious power that I feared I would simply pass away on the spot.

There was no follow up question. In fact I had long since given up taking notes, instead drawing line after line on the page to spare myself the spectacle of that furious gaze.

With the ‘show’ over, the locals began to disperse. And soon the bandwagon moved on too.

“Did you get everything you wanted?” asked Dr Paisley.

And what was that? Was he smiling?

“Err, yes. Thanks for your time,” came the meek reply.

I knew there and then that this was a man going places. If he could deflect my political parries, then the sky was the limit.

At around the same time I also crossed swords with another big-hitter, Dr Paisley’s polar opposite Gerry Adams.

Still a bit tender from that merciless mauling I was a bit more reluctant to engage in the cut and thrust - but I was assured that the Sinn Fein supremo was agreeable.

Furthermore, it had been agreed that we would be the only interview of the day.

How could I say no?

I joined the press pack at a rendezvous point in Rathenraw, aware that Mr Adams had hit the headlines again that very morning over a fresh bump in the long road to peace.

The media were out in force, all keen for a quick word - but he was having none of it.

Former Councillor Martin Meehan was there too, reminding the VIP that he had agreed to have a chat with yours truly.

After much head shaking, a clearly irritated Gerry Adams was talked around and leading me to a corner of the garden he muttered ‘alright then, two minutes’.

Frost versus Nixon it was not. Once again I fired off the same scintillating salvo of incisive questions as he stood rather too close, with his hand above my head holding onto the fence behind me.

God, he was tall. And I suddenly felt very, very small.

He mumbled quick yes and no answers to all my queries and, unable to think up any more on the hoof, the ‘interview’ was over all too soon.

Like my encounter with Mr Paisley, I was left in a bit of quandary. Just how was I supposed to turn this into a story?

I met many of the other players in the Good Friday negotiations that year too.

SDLP leader John Hume proved to be polite, if a little weary, tetchy even, at being asked the same old questions yet again.

David Trimble proved to be a bit irritable too. It all started rather well, but things soon deteriorated when he mistook an inane enquiry as something much more perceptive and tempers frayed.

He shouted at me too. I suppose I just have that effect on people. Like a Poundshop Louis Theroux I seemed to have an unerring knack for getting the very worst out of people!