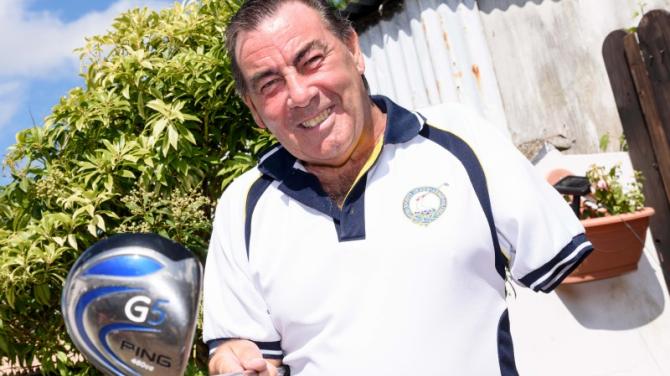 TWO years after an horrific motorcycle accident in 1971, which left John Condie’s arm a mangled mess, doctors finally took the decision to amputate.

“They asked me what I wanted to do with the arm,” he said.

“I didn’t really understand the question. I had this vision of it in a glass box, hanging on the wall above the mantelpiece.

“In the end I just blurted out ‘do you know anyone with a dog?

“I know now that they were asking if I had a burial plot that I wanted to put it in, or did I want to donate it to medical science.

“To this day, I still don’t know what happened to it.”

This humour is typical of John, no stranger to adversity, who overcame a major physical challenge to become one of Antrim’s best-known sportsmen.

John grew up in Crumlin, his father the managing director of the town’s mill.

Crumlin was largely rural back then, and motorbike fanatic John used to love travelling to Nutt’s Corner to race on his 250cc machine.

“The big guns could accelerate much faster than me,” he said.

“But when it came to braking and manoeuvrability, I could nip past them in the home straight!”

He was travelling home past Glendarragh Park one evening when he was in collision with a car.

“My head went one way and my shoulder went the other,

“I can’t remember much about the accident at all. I was in hospital for a long time. My collar-bone was shattered too.”

John was under the care of the eminent Danish consultant Paul Harald Osterberg at Musgrave Park Hospital.

“Mr Osterberg gave me hope that the arm could be saved, but in the end it just became a dead weight,” he said.

“It was 14lbs that I had to carry around and after two years I’d had enough.”

With medical students watching, Mr Osterberg would often demonstrate how he removed part of the bone from John’s forearm and attached it to the remains of his shoulder, to give him more mobility and support a prosthetic.

But John defied the advice and decided to soldier on.

“After the operation, the nurse asked if I wanted to look at it and I wasn’t keen,” he said.

“She said, you’re going to have to look at it sometime.

“So I very gingerly lifted the dressing. At that moment a big drop of blood splattered on the floor and I woke up back on the ward - I must have passed out!

“Back in those days, the prosthetics were very cumbersome.

“You had to strap it on and it worked with a ratchet.

“I was stopped at a checkpoint once and I put my arm up and the ratchet operated and it made a noise like a gun being cocked. The squaddies were all over me.

“The old arm had a brown glove, which was ridiculous.

“I asked if I could have another one for my good arm, how stupid would it look walking around wearing one brown glove.

“I have a newer one now, technological advances mean they are much more lightweight and easier to use, but I hugged one of the grandchildren and he didn’t like it, he found it scary, so I don’t wear it at all now.

In fact, the new, lightweight prosthetic arm - complete with a realistic-looking hand and attachments for typing and peeling vegetables - lives in the cupboard under the stairs.

“There are so many things that people take for granted, like putting toothpaste on a toothbrush, tying my laces - people say you should wear slip-ons, but it’s not the same.

“The wheelbarrow used to be a problem but I just fixed a bit of wood across both handles and I can do it no problem now.

“I used to be invited back to Musgrave Park to chat to people before amputations, to give them hope and show that there is life after losing a limb.

“However with the advances in technology and medication, that doesn’t happen so much any more.”

A big problem for John, as with many amputees, is ‘phantom pains’ -

“I had pains when the arm was there, even though I know there was no feeling in it and I still have pains now to this day.

“It’s actually getting worse as I get older.

“The arm is gone but the pain is still there - it is terrible at night.

“I have to go for a drive or do something to take my mind off it.”

Having one arm was no impediment to work, as John went off to work for the Ministry of Defence at Aldergrove.

“People used to think that I worked for Sunblest as I used to get a lift to work with the bread man and we called in at all the shops on the way every morning!” he laughed.

It was at Aldergrove that he met his now wife of 22 years, Gerry, from Sussex.

But it was not until later when she saw an appeal on GMTV from a one-armed golfer looking for sponsorship, that she decided to track him down.

“I reckoned there can’t have been too many guys called John Condie with one arm!” she laughed.

Never one for convention, John credits his move into golf to ‘Arthur Guinness’.

“I was in the Cova having a pint of the ‘black stuff’ and someone had a magazine.

“There were pictures of one-armed golfers playing at Rosses Point in Sligo.

“It looked so picturesque and windswept - and rainy - and we were all wondering how they got their waterproofs on.

“Someone suggested I have a go. I’ve always been competitive and I still love to follow the motorbike racing so I thought, why not?

“I started going to the pitch-and-putt in Toome, and graduated to Ballyearl and Massereene and soon I was playing 18 holes on Saturdays and Sundays.”

John, now a stalwart at Antrim Golf Club, got involved with The Society of One-Armed Golfers.

Initially the organisation was principally for golfers who had lost an arm in World War I but over the years has evolved and now includes golfers who have lost the use of an arm through conflict, road or industrial accidents, birth defects or for neurological reasons.

Each year the Society holds national competitions and a World Championship which is attended by up to 72 golfers of all standards from a dozen countries around the world.

Although largely based in the British Isles other members are from places such as USA, Germany, Sweden, India, Australia, Bermuda, France, South Africa, Denmark, Indonesia and the Netherlands.

“My proudest moment in golf was playing at St Andrew’s for the 75th Anniversary of the Society,” he said.

“I have made some brilliant friends through the society, some of whom have sadly passed away.

“Through the sport I have been able to meet Princess Anne, Dame Mary Peters, Dave ‘Boy’ McCauley, Martin O’Neill and Michael O’Neill.”

John was nominated to carry the Olympic torch on its relay through Northern Ireland ahead of the Olympic Games.

“The tracksuit was very thin and we had to buy white trainers with no logo, I felt like I was wearing a pair of school gutties.

“You couldn’t have anything on you except for ID and an emergency phone number.

“I did the relay though Glynn near Larne towards the roundabout with the big crown on it.

“We were all at a holding station in Carnfunnock Country Park when I was told that there was a drop out and could I do their part of the relay.

“So, because I had to do an extra leg, the Antrim Guardian headline was ‘TWO LEGS, ONE ARM’ - just like me!

“My son had to run beside me, backwards, to get the photograph.”

The aforementioned photo takes pride of place above the mantelpiece - where John imagined his glass-encased arm might once hang.

“It was tiring enough, having to hold up the torch and run and smile at the crowd.

“I did a little Daniel O’Donnell-style twirl at the end and got told off by the officials - apparently that wasn’t allowed.”

John’s love affair with motorbikes remains unabated, and he loves to attend the North West 200, Armoy Road Races and the Ulster GP.

A photo with racing legend Giacomo Agostini also hangs in the living room and he has plenty of anecdotes of good times gone by.

“Joey Dunlop was a real hero of mine, I was devastated when he died,” said John.

“I lost so many friends and idols to accidents and I thought of walking away many times, but I can’t keep away.

“There was a function in the Enkalon Club one night and they pulled down the shutters behind the bar and Joey was keen for another drink and asked me if I could have a word.

“I knew the girl behind the bar so I pulled some strings and I had the honour of getting Joey Dunlop a double vodka and coke.

“I also had the honour of buying Joey Dunlop a double vodka and coke.

“I also had the honour of buying drinks for all of his friends, while I was at it!”