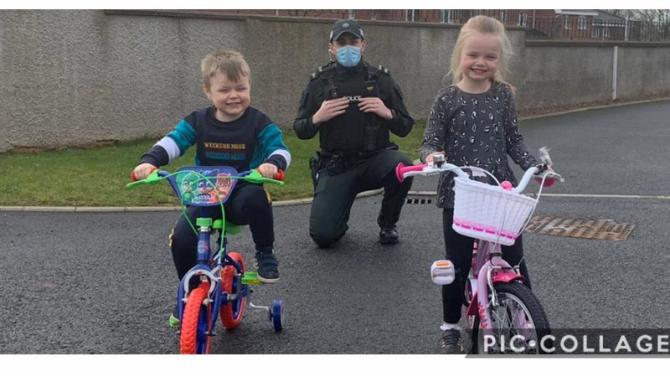 POLICE in Antrim have been praised after going above and beyond to replace two childrens’ stolen bikes, which had been bought as Christmas presents.

PSNI Antrim and Newtownabbey revealed the act of kindness after a car theft in the town last week.

“Police in Antrim attended a report of a car being stolen from outside a house.” said a spokesperson.

“The owner had left the keys in the (ignition) and the vehicle running to allow it to defrost.

“A short time later the car was stolen.

“In the boot were two bicycles belonging to children that they got for Christmas.

“The owner of the car and the children were obviously devastated at what had happened.

“Police made a phone call to Halfords, Boucher Road and they offered to replace the stolen bicycles.

“Police collected the bikes and delivered them to two very happy children.”

The stolen vehicle was a Silver Ford C-Max registration YM12DZW.

Police later updated: “An eagle eyed member of the public has phoned police to advise us of the current location of the vehicle.

“Police are now with the vehicle and it is being recovered.

“If you have any information regarding the theft of the vehicle please contact Police in Antrim on 101 quoting reference number 209 11/01/2021.”

The car was taken from Manse View in Crumlin and police say it was recovered from a nearby street the following day.

Police have reminded people to be vigilant and not leave cars open and unattended with keys in the ignition when defrosting on icy mornings.