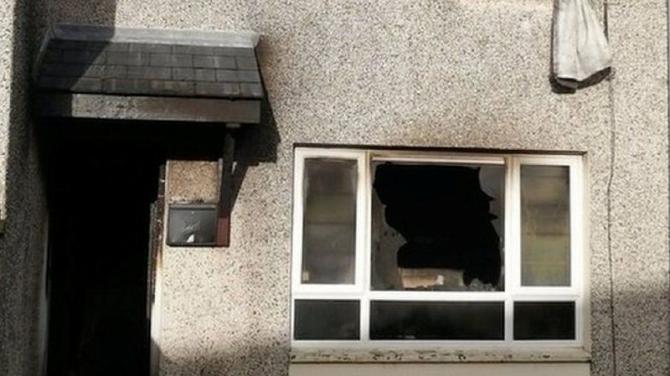 A NUMBER of people were evacuated from their homes on Friday night after a ‘sinister’ attack on a house in Antrim.

A blaze broke out at Altmore Close, off Stiles Way in the town.

In a statement issued on Saturday, the PSNI said detectives are “investigating an arson attack at a property in Antrim yesterday evening (January 15th)”.

Detective Sergeant Lorimer said: “We received a report at approximately 9:25pm of a fire at a house in Altmore Close. Police and NIFRS responded.

“Thankfully, no-one was present in the house at the time, however, residents from the next door property were forced to leave their home as NIFRS dealt with the blaze.

“Significant damage was caused to the house as a result of this sinister attack, which we are treating as arson with intent to endanger life.

“Enquiries continue, and we are appealing to anyone who was in the area at the time, or just prior to when the blaze was reported to us and saw any suspicious activity, or who has information about this incident, to call detectives on 101 and quote reference number 1764 of 15/01/21.”

The police say information can also be given on the non-emergency reporting form via www.psni.police.uk/makeareport or anonymously via Crimestoppers on 0800 555 111 or online at http://crimestoppers-uk.org/.

Antrim Town Alliance Councillor Neil Kelly expressed his shock at the incident, saying: “This was a terrible frightening attack on a house in Antrim.

“I am thankful that no one was hurt by this reckless act and I urge those who know anything about this please report it immediately to the PSNI.

“Those responsible need to have a word with themselves as they have nothing to offer other than violence and destruction.

“There is no place for this in our town.”

SDLP rep Roisin Lynch also condemned the attack, saying those responsible have no support in the local community.

“I was deeply disturbed and angry to learn that late on Friday night, a senseless arson attack was committed on an Antrim home.” she said.

“It is incredibly fortunate that nobody was in the property at the time or it could have been a very different story.”

“Those responsible for this attack and forcing neighbors out of their homes on a cold January night have no support in the local community.”

“An attack of this nature is appalling at any time, but particularly during a dangerous global pandemic which is putting huge pressure on our health and emergency services.”

“I strongly condemn this attack and urge anyone with any information to contact the PSNI.”

DUP councillor Paul Dunlop added: “The arson attack in Altmore Close could have had serious consequences, thankfully no one was injured.

“This type of incident is unwelcome in our town and I ask anyone with information to pass it on to the PSNI.”

Meanwhile, his party colleague, South Antrim MLA Trevor Clarke, said: “ I was shocked to learn of an arson attack in the Stiles area of Antrim on Friday evening.

“This was a barbaric act with a clear intent to cause destruction.

“We can only be thankful that nobody was present at the house.”

“I understand that neighbours were forced to move out of their homes whilst the blaze was brought under control, my thanks goes to the Northern Ireland Fire and Rescue Service for their work.

“Those that carried out the attack must be brought to justice”