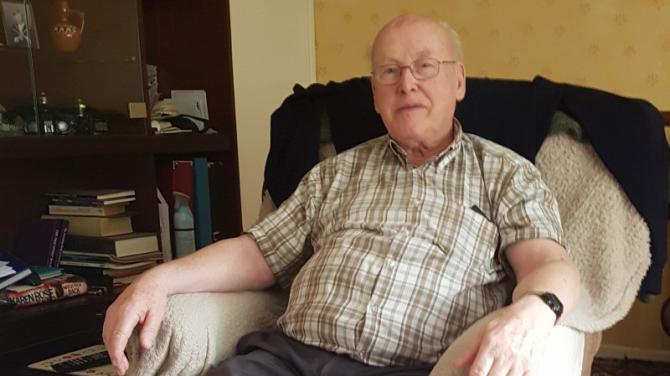 BILLY Glenn will be known to many in Antrim as one of ‘the men in the hut’ at the Forum.

It’s hard to believe in these times of relative peace, that a building so innocuous as a leisure centre required a constant security presence which, among other things, involved a bag check on the way in.

While he has lived in Antrim for most of his adult life, Billy grew up in the village of Killen near Castlederg.

One of ten children, his father was an ‘insurance man’, travelling the roads by bicycle, after a period in the army.

His uncles had been captured at Dunkirk during World War 2 and marched back into Germany to work either in the camp where they were imprisoned or hired out as farm labourers.

“They were marched 24 hours a day, with a ten minute rest stop every two hours,” Billy told the Antrim Guardian in an indepth interview back in 2019.

“They had only just been issued with new boots, so their feet were covered in blisters.

“One of them was a blacksmith by trade so he got the job of fixing things in the camp.

“Others went out and had to pick potatoes in the field, as all the German men had gone off to war, and they were guarded to make sure they didn’t steal anything for themselves to eat.

“My uncles said that the German women would throw spuds at them over the wire in the camp and shout at them.

“They were pretending to be cross with the prisoners, but they were actually doing a kind thing and making sure they had a bit extra to eat.”

Billy’s first job was with the old Ministry of Agriculture, in the forestry division at the Baronscourt estate.

“I did everything!” he recalls.

“The logs used to be chained up and pulled by horses, then taken to the docks at Derry on the lorry and stacked, waiting for the boats to come in.

“Mostly they were used as pit props, but that dried out with the collapse of the mining industry and the pits all closed.

“I loved the run to Derry, I used to hang around the docks to help with the loading and unloading and sometimes the dockers would send me to the bookies and give me a share if they won anything.

“I remember Hurricane Debbie in 1961, it just flattened everything.

“I was there for 12 years and then I was with a building contractor for eight years until I had an accident and fell through a joist and cracked my ribs.

“I had one sister in Larne and another in Antrim and a job came up in United Carriers, based in Steeple and I was there for six months.”

But it was the opening of Antrim Forum - Northern Ireland’s first purpose-built leisure centre - in the early 1970s which provided Billy with his ‘job for life’.

“One of the guys at United Carriers got a job in the Forum and I told him, if another job comes up, let me know and he did, and the rest is history!

“I continued to work for United Carriers on my days off but the other boys complained that they were getting no overtime so I had to knock that on the head.

“When I first came to Antrim it was a bit busier than Killen!

“There had been a fella from Portglenone working with me in the forestry, an ex-Navy man, so that helped me get used to the accent.

“When it was first opened it was the best of its kind in the country. People used to come from far and wide to train there, everything was state of the art.

“It had an eight-lane running track, whereas the Mary Peters track only had six.

“Mary herself would come to the Forum, and people like Steve Ovett, all the top athletes of the day.

“I used to be in the hut at the gate and would search all the bags when people came in.

“You forget what it was like back in those days, that everyone had to be searched going into public buildings.”

The Antrim Forum also played host to some of the best-known musical acts of the period.

“The only trouble I can ever remember there on my watch is when Meatloaf played and we were locking up,” he said.

“Myself and Duncan Magowan [a fellow security guard] saw someone up the stairs.

“Some of the concerts lifted big money and it was our suspicion that this person was trying to find it.

“I shouted at whoever it was to stay where they were.

“There was a big security door at a fire exit and this person had broken some glass to climb through to get in, and climbed back out through the glass to escape again.

“All they needed to have done to get out was to have pushed the iron bar!

“That was probably the most exciting thing that happened.

“The rest of the time we were just collecting and looking after things left behind.

“At the beginning there were six security staff but through time that increased to eight.

“Now, of course, there are no security guards but the whole place is covered in CCTV.

“I still try to get to the Forum regularly, since my retirement in 2001, as I do need to keep fit!”

Billy’s first home in Antrim was at Kilgreel Road, before he moved to the Dublin Road, where he kept a well-tended garden.

He has had many hobbies over the years, including joining the local camera and amateur radio clubs.

Billy spent many happy times on Rathlin Island and has communicated with people all over the world.

“We would send each other our cards,” he said.

“I do remember that anyone ‘behind the Iron Curtain’, we had to send correspondence to PO Box 88, Moscow!

“Those were very happy times with some great people, a lot of them are dead and gone now, sadly.

“But I have no antennae now, I sold my rig.”

He has also seen massive changes in the photography world.

“You used to spend hours in the dark, developing things, I had a room upstairs,” he recalls.

“Now you can take a snap on your mobile phone and send it to someone on the other side of the world in an instant.

“My sister has two children and we are WhatsApping each other all the time. It’s a great way to keep in touch.”

An avid reader, he devoured thrillers and spy novels, and is a big fan of the Jack Reacher franchise.

And when the old ‘Tech’ was still in operation, he enrolled on many courses.

“It’s a shame it closed down, I think it is important to keep learning new skills, whatever your age, you have to keep your mind active.

“I spent a lot of time in the village of Alvor in Portugal and ended up trying to learn Portuguese, but there never seemed to be enough people to run a full course.

“I’ve done a few other courses at Rathenraw and other places, and I am always on the lookout for something new to learn!”