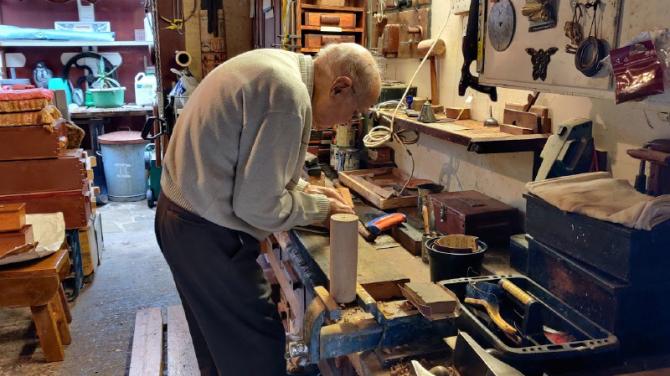 BOXES, stools, side tables and bookends were stacked in the centre of the room.

Gleaming with varnish, some dark and some light, some embellished with metal inlays, but all of them wooden.

Standing amongst these creations was like being enclosed in a maze of handcrafted accessories.

“This is just one of the rooms,” Karen indicated. “This one is also filled.”

Fred Wilson was originally from Lady Hill. He worked on a local farm, until he turned 17 and became a builder.

It was there he learned the practical skills, namely carpentry, that would shape his life.

“So many specialists are involved in building a house. But at the time we learned a bit of all the trades.”

At the age of 17 he became a Christian after being invited to a First Antrim Church service.

“I suppose you could say when I was 17 quite a lot happened to me!” he said.

In the 65 years Fred had lived in Antrim there had been several Ministers and dozens of Elders that ‘floated in and out of the church’, but he could recall with startling clarity each of the people he encountered on a Sunday morning.

Indeed, an innocuous afternoon stroll with his Minster at the time, Rev Tom Blackstock, shaped the way Fred would approach his passion for carpentry.

Rev Blackstock stumbled upon a small unbecoming table at the church auction.

But Rev Blackstock restored the table and to Fred’s surprise it was not worthless;

“No-one could see the beauty of it, but it was mahogany.

“There was unseen value in this table which had sold for a couple of pounds.”

In many ways this early encounter would shape Fred’s approach to ‘up-cycling’. planks of wood that were being tossed aside as scraps.

“It is very sad to go up to the skips and see the timber that has been discarded,” he admitted.

But through the years Fred had developed an eye for the wood that could be re-imagined into staple pieces.

He told me about the stool he had just given to a daughter’s friend.

“It was probably 150-years-old,“he recalled.

“It was made from the beams of the old Antrim town market.”

He gave it to her in exchange for £40 being donated to charity.

Thus, began Fred’s quest to wield his decades-long hobby into a way of raising money for good causes.

Gradually splinters of Antrim’s history collected in Fred’s spare rooms, in the form of sturdy furniture.

There is something comforting about imagining this town’s unruly history being condensed into items that would support cups of tea or collect old Birthday cards.

He summoned memories of Antrim from the 50s, 60s and 70s fondly and quickly.

His descriptions felt familiar but uncanny, like someone showing me a fuzzy picture where I can just about make out the subject of the photograph.

He, along with a group of friends, faithfully offered their services to First Antrim Church, transforming the interior of the building from something uninviting into something welcoming.

When reflecting on that time, he smiled fondly.

“It was a great joy,” he said, modestly.

With that simple response he carefully refocused attention on celebrating an opportunity rather than bemoaning an endeavour.

It was this deliberateness in his choice of words that so obviously translated into an attention to detail in what he constructed.

His shed, set aside for catering to this hobby, was coordinated and startlingly well organised.

The creations I was introduced to were little stepping stones in time, markers of Fred’s experience in Antrim.

A Facebook page has been created entitled Fred’s Woodcraft where all the items are displayed.

A good number have already gone but if anyone would be interested in obtaining any of the remaining pieces - to use, re-gift or up-cycle - these are available in exchange for a donation to the NI Hospice.

Please send a private message via Facebook and arrangements will be made for the item to be collected at the Hospice Shop in Antrim town when current restrictions are eased.