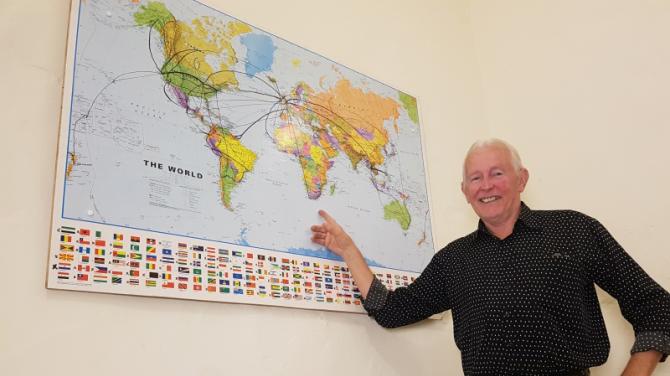 AS a young boy Oliver Bonnes remembers sitting at the feet of an old family friend, listening to tales of travel and adventure across the continents.

“When I was a kid, there was an old boy who lived up the road from us who would come to the house for a bit of céili-ing or a bit of yarning and I don’t know how many of the yarns were true,” he said.

“They were good stories anyway. He said he worked for Al Capone in his liquor places, he said he ‘hoboed’ across America and he took a boat from LA to Australia.

“At school I was always keen on geography, so I guess I can pinpoint exactly when and how I was bitten by the travel bug.”

Oliver was born and brought up in Magheralane, and he never travelled too far from there.

“I built my own house not far away from the family cottage and my sons all live about a field away from me,” he told the Guardian a few years back.

Oliver was adopted and thanks to the advent of the internet and genealogical research, has since met up with a number of long-lost relatives in England and America.

He is perhaps best known in Randalstown for being a local shopkeeper and now publican, running Laverty’s on Main Street.

But the sprightly local man is certainly one of the best-travelled people in the borough, recently ticking off his 140th country visited.

A map which once famously hung in the office of Oliver’s Spar franchise now takes pride of place above the back stairwell of the bar.

“As long as I can still carry a backpack, I will!” he grinned.

Oliver was working in England before he made the decision to up sticks for the first time.

“I went to Canada and then California and San Francisco. I arrived in the USA in late 1969, which was a good time to be there!”

From there, Oliver travelled down through Central and South America, rhyming off countries quicker than they are able to be written down.

It was during his travels that he met his late wife Maura.

She had been born in Ireland and grew up in England and the pair married in the USA.

He continued to traverse the continents, sometimes with pals but more often than not, alone.

“That’s just what we did in those days, sometimes we were probably in real danger, we weren’t clued up or well read, there was no Lonely Planet guides in those days. Ignorance was bliss, I suppose.

“When we were going through Central America the Sandinistas (revolutionaries) were still around, but we didn’t think anything of it.

“I do remember one time in Ecuador, it must have been 50 years ago, we were looking for somewhere to stay and these boys gave us a lift, my mate Vince spoke Spanish but he didn’t let on.

“The men who gave us a lift were planning to rob us, they had a big discussion about it but they decided if we were accepting lifts and looking for places to stay, we probably didn’t have any money, and they were right!

“So they decided against it and we were allowed to go on our way.

“I loved Afghanistan and countries like that, they wouldn’t be considered safe places to go.

“I have pictures of myself sitting on a truck going through the Khyber Pass with men in bandoliers full of bullets.

“At the border of India and Pakistan, you would often have to wait to pass through while they negotiated a prisoner exchange.

“But the only bad experience I have had was in Moscow of all places, and quite recently, when I was doing the trans-Siberian route.

“I was heading back to my hostel late at night when three guys jumped me and I fell and hit my head and they took a knife and cut my shorts off.

“I guess they were looking for a money belt. I got the shorts in Australia and they were very loose, thank goodness.”

Oliver rarely visits the same place twice and his favourite places are in south-east Asia, including Thailand, Vietnam, Cambodia and the Philippines.

“I have been back to Koh Samui,” he said.

“Everything there is so much more laid back and cheap.

“You can easily stay somewhere for three or four pounds a night and somewhere much fancier for a tenner.”

Oliver has also been a frequent visitor to the South by Southwest festival in Austin, Texas.

“I hear people say they wouldn’t want to go to America, but they are just getting their information from the television.

“It is such a huge, diverse place, there really is something for everyone - although it is pretty expensive.

“I do prefer being in the country though. I can only stick the big cities for a day or so.”

Being Irish, Oliver has always been well-received abroad and has made firm friends through his travels.

“When I was in Panama, an American gave us some addresses of people he was in the Peace Corps with - that gave me places to stay in Bolivia, Columbia and Peru.

“I had to go and speak to the Adjutant in the American sector of Panama and he was able to tell that I was from Northern Ireland from my accent.

“I asked how he knew, as not everyone would be able to tell, and he told me he had served there and he asked where I was from.

“I said that I was from a wee place called Randalstown that he wouldn’t have heard of, and he told me he used to drive through it every week!

“Right enough, the Americans were based in Derry and as a boy I remembered the American cars and trucks, they were dark grey with a big blue star on them.

“When I was in Western Samoa, I went to see the grave of Robert Louis Stevenson (the well-travelled writer who penned Treasure Island, among other books) he is buried in a Sarcophagus on a mountain.

“I was with a pal called Freddie from Cork. On the way up we met two nuns coming down. One was from Dublin, the other from Manchester, and we met an old guy who was over there helping to build a school, who lived close to Freddie’s uncle!”

Travelling with others can also have practical benefits.

“If you want to get into Tibet, for example, you need a Visa and hire a tour guide.

“I travelled with a German, a guy from the south of France and a French-Canadian - it just made the whole thing safer and cheaper to travel together.”

The hospitality is always returned, and the people Oliver has met on his travels always receive an invite and the promise of a warm welcome and a refreshing pint in Laverty’s.

All of Oliver’s four sons are ‘homebirds’, he says, with only teacher Nicky doing much travelling through his youth football career.

One runs the shop from which Oliver retired a few years back, while another works in a bank and another is a plumber.

“I thought the shop would be a nice solid career and it was always interesting,” he said.

“When I took the pub over, it had been burned down in an electrical fire and the whole thing needed renovated.

“Again, it brings me into contact with lots of people and visitors from other countries.

“I do like Randalstown. Some of the old faces have passed on but generally it hasn’t changed too much.

“When I came back home after my first big trip, I thought about Ballymena and Antrim, but they didn’t really do anything for me. I don’t think I would have settled anywhere else.”

Oliver now has his sights set on east Africa, having worked in Nigeria and travelled through Morocco.

In terms of language, he says he speaks a smattering of Spanish and some Arabic, learned as a labourer in Saudi Arabia, where he worked to earn money to be able to build his own family home.

Previous to that, he worked in the haulage industry.

“They are only a few small words but people are delighted that you have made the effort to speak their language and just those few words can open many doors.

“I feel very privileged to have this lifelong love of travel and to have visited all the places and people that I have.

“And it has all been done on a shoestring budget.

“The whole trip around Morocco was done for less than £500.”

Oliver has plenty of advice for anyone planning to travel.

“Just get out there and do it. Don’t think too much or plan too much. People also take far too much gear with them.

“It’s the people you meet and the things you see and the experiences you have that are the most important things.”