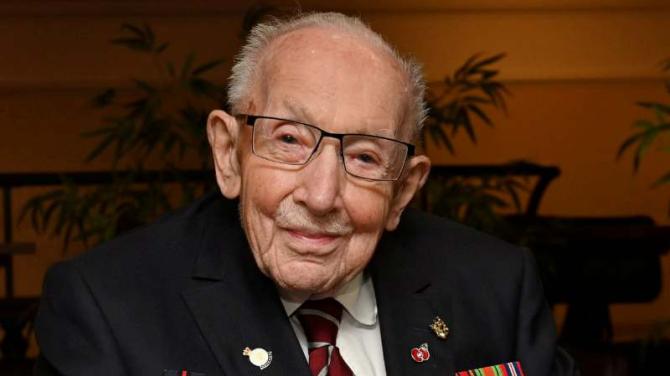 ANTRIM and Newtownabbey Council have saluted the man who lost his personal battle with the virus he had dedicated the last year of his long life battling.

Captain Sir Tom Moore sadly passed away this week shortly after being diagnosed with COVID-19.

He had captured the hearts of the nation as he raised almost £33 million for the National Health Service Charities Together, by walking 100 lengths of his garden path in Bedfordshire last year during the first lockdown, raising money in the lead up to his 100th birthday.

The council has saluted the man who became a beacon of light in some of the darkest days of the pandemic.

Their civic buildings were lit up blue to commemorate his life.

Mayor Jim Montgomery also opened an online book of condolence for residents who wish to pay tribute to the veteran.

During the Second World War he served in India and the Burma campaign before he became an instructor in armoured warfare.

After the war, he worked his way up to managing director of a concrete company, and also was an avid motorcycle racer.

Mayor, Councillor Jim Montgomery said he was ‘one of a kind’.

“I join the rest of the nation in offering my deepest condolences to Captain Sir Tom Moore’s family,” he said.

“He was an inspiration who touched the hearts of the people with his selflessness and his sense of humour.

“He lifted the nation’s spirits with his fundraising efforts in a time when we needed it so much.

“He will go down in history as one of the true heroes of COVID-19 and I doubt we will ever see the likes of Captain Sir Tom Moore again.”

Captain Sir Tom Moore received a knighthood from the Queen in July in a special ceremony at Windsor Castle and he went on to break two Guinness world records – becoming the oldest person to get a No 1 single in the UK charts and raising the most money for doing a solo charity walk.

Following his fundraiser, several murals were created to celebrate his achievement - including one in Parkhall and another at a military base in Aldergrove.

If you wish to pay tribute to Captain Sir Tom Moore by leaving a message in the online Book of Condolence visit www.antrimandnewtownabbey.