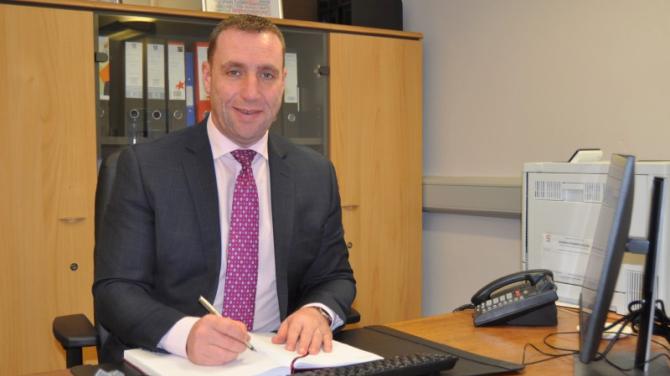 NIALL O'Hara is a man with a mission.

He took up his role at Crumlin Integrated College in September 2019, and despite everything the coronavirus has thrown at him, he and his team have helped turn the fortunes of the school around in a relatively short space of time.

But they are not resting on their laurels, aiming to put the college front and centre of the local community.

“At the school, CIC does not just stand for Crumlin Integrated College, for us it also stands for ‘College Investing in Community’,” said Mr O’Hara.

A quarterly assessment structure implemented pre-Covid, aimed at helping pupils attain better outcomes, has stood the school in excellent stead with the cancellation of exams because of the pandemic.

“The data is harvested and used to identify which pupils are on, above or below targeted and as well as helping with predicted grades, it has allowed us to intervene earlier and put measures in place, like extra classes, educational or pastoral support.” said Mr O’Hara.

In his first year in post, the number of pupils achieving five or more A*-C GSCE rose by 40%.

In the space of four months, thanks to sustained investment, every Year 8 pupil has been equipped with their own iPad, a ‘necessary expense’ according to the principal.

ICT skills, he said, have ‘blossomed’.

“We have done in four months what would normally have taken years,” he said.

Indeed the Education Authority has cited the college as an example of best practice in online learning and has featured the school on its’ website.

The innovations don’t stop there - as the school recently announced it is expediting a pre-pandemic plan to introduce a ‘non-selective grammar stream’ and future aspirations for 11-18 years education.

Mr O’Hara is keen to point out that the recent achievements have been as the result of teamwork.

He had previously worked in grammar and secondary schools in Downpatrick and in Crumlin, inherited a ‘school in transisiton’.

The school had faced criticism by inspectors for failing to provide an acceptable standard of education due primarily to short-comings in management.

They highlighted major deficiencies in leadership, poor teaching standards and exam results, and inadequate special-needs provision and the school was placed into formal intervention in 2010.

Following this, former principal Dr Annabelle Scott was removed from her post and sent for training after the publication of a damning inspection report.

Her return prompted protests from parents and there were even threats to her safety.

The school is now recovering from the controversy, and Mr O’Hara wants local people to put their trust in him and his team.

Thousands of children from the surrounding areas attend schools in Belfast and beyond - despite the college being the only post-primary facility for miles around.

“When I took up post, there was a whole review of staffing structure, senior management, identifying areas of improvement and that led to a new management being appointed, we looked into learning and teaching, development, pastoral care, PR, we changed our discipline policy.

“We improved the learning and teaching process in school, established clear roles and expectations, we put in place training for staff so that they could achieve much better outcomes for pupils.”

Extra-curricular activities were developed, and just before the first lockdown, a new football team was entered into the Inter-Schools League, and thanks to support from the local community, Gaelic and Soccer kits were purchased and sponsored.

Thanks to pupil input, a showjumping team, netball, basketball and golf was developed and Ulster Rugby visited the school to give a talk and guidance on establishing a team.

“We also looked a non-sport activities, with plans for a debating society, current affairs club and other activities - all those things which benefit pupils and extend holistic development.

“There is a real need for a healthy balance between work and leisure and we firmly believe that there are education opportunities beyond that which exists in the community.” said Mr O’Hara.

Also part of the team are a well-equipped, newly constituted Board of Governors from varying backgrounds and areas of expertise, including a barrister, social workers and a former Childrens’ Services lead who worked in London.

There is also parent representation to provide a wide consensus of thought and input on how every decision will benefit the children.

“My grandmother said ‘everyone and everything has a past and a future.” said Mr O’Hara.

“We have been engaging very closely with the local communtiy though surveys, questionnaires and our colleagues in the EA.

“From all that consultation and feedback, we are getting that there is a fresher, better opinion out there of the college.

“Before I took up post, the school had developed a fantastic shared education partnership with St Joseph’s Primary School, Gaelscoil Ghleann Darach and Crumlin Integrated School.

“We must be outward-facing. We are also developing strong links with the feeder primary schools - Straidhavern, McKinney, Loanends, Ballymacricket and others in the hinterland.”

Crumlin is an integrated school in every sense of the word, taking in pupils from every background and culture and catering for pupils displaced from their homes in Syria.

“We have a specialist classroom assistant - staff don’t have to be Muslim but we do expect that they can converse in Arabic and offer that important link between the school and parents, some of whom do not speak English.” Mr O’Hara explained.

“We are considering offering a GCSE in Arabic.

“We have invested considerably in support for these pupils and very few schools in Northern Ireland offer what we do in terms of assistance for students like these, who may have experienced extreme trauma as well as trying to adapt to a new school in a new country.”

He added: “We had one student from Syria who joined the football team last year and that was brilliant for his personal development, language skills and in terms of his literal integration into the local community.

“We are very proud of how welcoming our students and staff were towards these families.”

Special educational needs is also a key focus and the school is now known for providing strong pastoral support.

“This is an integrated school in every sense of the word, not just something we nod to at prize-giving ceremonies and open nights, it runs through the entire ethos of what we provide here and it is something that we are truly proud of.”

He added: “Integration is not something that can be diluted.

“It has to be about improving social cohesion and recognising and celebrating different cultures and pupils of all abilities.

“A school which is integrated in name, but which holds assemblies based on a Christian format or which doesn’t allow, for example, play rehearsals on a Sunday, still only caters to one side of the community.”

Mr O’Hara said that he is saddened to see so many parents sending their children to school outside the area - and it is a trend that he wants to see reversed.

“It does sadden me when I drive through places like Crumlin and Glenavy to see the amount of pupils leaving their areas, getting up at the crack of dawn to get the bus to Belfast and coming back in the dead of winter in the cold and the dark.

“A lot of people withdrew their children because of the previous issues the school was going through and we want to let people know about the huge improvements that have been made and that are continuing to be made.

“We offer a high quality of education and with that in mind, in September 2022 we were planning to take in a non-selection grammar stream, as a percentage of the Year 8 intake.

“However that has now been expedited because of the cancellation of the transfer procedure.”

Mr O’Hara said that the plan was ‘an honest and genuine attempt to meet the needs of the community’ in very trying times.

“Inevitably there will be disappointment as P7s and their families and parents find themselves in the position where they cannot get into the school of their choice.

“It is no one’s fault, we cannot reverse it, but we can step in and offer support in the vacuum that has been created and offer those pupils who may not get into the grammar school of choice or who don’t want to go through the AQE or GL selections, a place at this school.”

He added: “We want to enhance and develop the range of abilities of children who did not want to or could not do a selection test.

“We aim to offer a tailored education - someone may excel in English but may need more help in Maths.

“Sometimes there is a need to branch pupils off in some subjects, to get the best out of every pupil according to their ability, but without some of the weight of expectation that can be exerted at some grammar schools.”

Mr O’Hara said that the grammar stream is all part of a wider plan for college, to assist pupils who would benefit from having local provision.

“As well as the standard of teaching is of an extremely high calibre, we do know that young people suffer when their friendship circles and social groups change as a result of having to go to a school in another area.” he said.

Mr O’Hara said that as part of the plan, the school also hopes to offer education right up until pupils turn 18.

“Now is the time to invest in local post-primary provision.

“The desire for 11-18 years education hugely influences peoples’ choices in the transfer procedure and it is grossly unfair that children attending this college are then forced to go through yet another transition at the end of Year 12 simply because of geographical location.

“This is particularly pertinent for SEN pupils and those on the ASD spectrum, who can find it difficult adapting to new situations.

“At the moment we do not have the resources or finances to offer post 16 years education, but we initiated discussions with the EA last September and I have a strong belief that this year’s Year 8s, by the time they reach Year 12, will be able to stay on until they are 18.

“We want to be able to offer the academic and vocational subjects and allow our students to progress to third level education, University or the workplace straight from Crumlin.

“Our budget is determined by the number of pupils we have and with more students, we will receive more funding and will be able to realise these ambitions.

“Since we announced the grammar stream, we have had a huge expression of interest from parents and primary school principals and the responses have been very positive. Parents who would never have considered Crumlin Integrated College are now changing their minds.

“We want to create independent learners who will contribute to society and social cohesion.”

Mr O’Hara concluded: “I want to say that there is no need for anyone to bus their kids out of Crumlin or Glenavy, they can have a high quality education at the only post-primary school in the area, which we are keen to grow and develop.

“We have big plans for the campus and the traffic infrastructure and are working with the EA, local and regional Governments to achieve this.

“Give us a chance and you will be pleasantly surprised.

“I don’t think I am being over-ambitions when I say that withing three to five years, we will become over-subscribed and will either have to increase enrolment or turn people away.”