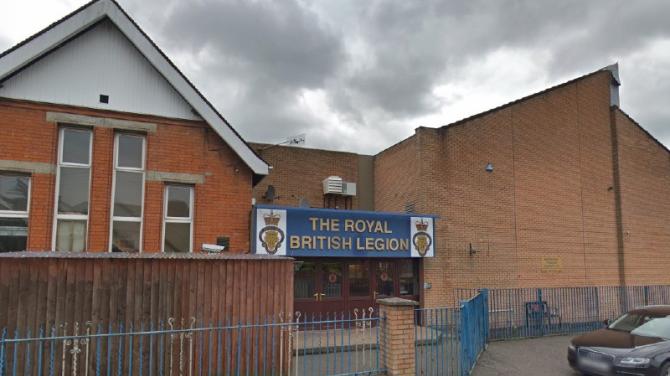 AFTER the sale of half of the Royal British Legion building on Lough Road last year, the Trustees have now applied to change the former concert hall into a church facility.

With the sounds of the showbands and raucous discos set to be replaced with songs of praise, there are also plans for a new food bank area and a creche.

The hall was built in 1979, just five years after the ‘new’ Legion HQ was built on the site of Massereene School.

It was designed to offer a safe haven for members of the security forces during the darkest days of the Troubles, and at its peak it was running functions practically every night of the week.

It proved to be a tremendous success, but as the threat level reduced by the late 1990s so too did the demand for such a large venue.

The Legion persevered, however, offering the hall for functions and charitable events - often free of charge.

But the bills still had to be paid.

The Legion had to find almost £11,000 for rates alone, let alone lighting and heating.

Something had to give or the whole branch could find itself in jeopardy, so in July 2019 an extraordinary general meeting was called - and the one item on the agenda was the sell off of the beloved concert hall.

The members debated the move for several hours, but the vast majority accepted that it was time to be pragmatic.

To ensure the long term future of the bar, the members’ lounge and the darts and snooker facilities, the function room had to go.

It went to the vote and 62 agreed. Only four voted against.

Chairman Paul Michael realised that time was of the essence and the wheels were soon set in motion.

No further bookings would be taken after the deadline for bids in December.

The die was cast. The Legion was voluntarily cutting itself in half.

There was no shortage of interested parties, but in the end one came closest to the modest asking price of £150,000.

It is understood that a local church group is firmly in the frame.

And while he is sad to see it go, Paul Michael said he was ‘relieved’ that the process had gone smoothly.

“We are looking forward to working with the church group, hopefully without a brick being knocked down,” he said.

“The committee agreed to accept the offer on the table.

This sale will see new life injected into the function room and from our point of view it should assure the future of the Legion for the foreseeable future.”

And that was a paramount concern for Councillor Michael.

“This is my 36th year working for the British Legion, and my 11th as chairman of the Antrim Branch,” he said last year.

“We realised that financially things were getting serious, but we were determined to keep it afloat.

“It was never going down on my watch.

“As chairman of the branch there was no way I could let that happen.

“The hall had to go, though I realise that many have great affection for it.

“There have certainly been some fantastic events held there down the years and a lot of great memories.

“But we have to live in the real world. It was built to service conditions that thankfully no longer exist.

“At the end of the day half a loaf is better than no bread.”

And he stressed that it will be business as usual at the Royal British Legion when things get back to normal.

“We are a thriving club and we have big plans for the future,” he said.

“We’re still here, and we will continue to offer services to veterans and our loyal members for years to come.

“We have cut our cloth to fit the current environment, and in doing so we have consolidated our position.”

And it is the fact that Paul Michael is also a UUP rep that the planning application has been called before the Planning Committee this week, due to ‘councillor interest’.

The trustees are seeking change of use of part of premises from Class D2 (Assembly and leisure) to place of worship (Church).

The east portion of the building is to be retained by Royal British Legion as Class D2 premises, with minor alterations and new compliant front and entrance lobby.

There are also plans for a new party wall to separate the west portion of the building with minor alterations to form access and new a window to the south elevation, to suit new use as a church premises.

There were no objections from consultees, 27 neighbouring properties were notified and no letters of representation were received.

A report said that the building has been used by the Royal British Legion since the 1960s.

The report before the commitee said that the area is generally mixed use, including residential, public parking, an existing church hall, a public house and various services and retail units.

The church is available for use by members of the community and does not conflict with the assembly and leisure use class that will remain within the western section of the building.

The Council’s Conservation Officer was consulted on the proposal and had no objections to the proposal.

It was considered that the proposed alterations and additions are sympathetic to the building and will enhance the existing appearance of the area and are therefore considered to be acceptable.

The change of use will occur on two floors and will include a number of internal alterations to include a foyer, worship hall, kitchen, toilets, welcome area/hub, food bank, storage rooms, meeting rooms and two crèche/prayer rooms.

The internal floorplan of the hall will remain unchanged, with the exception of the proposed porch area located to the southwest of the building.

The porch will measure 2.4metres by 2.8metres and will be finished with a pitched roof measuring 4.1 metres at its highest point.

The external materials will be red brick and slate roof tiles to match the existing building.

It was considered that there will be no detrimental visual impact resulting from this proposal, and the design and appearance of the proposal is considered acceptable.

It was considered that the proposed partial change of use to a church will not significantly differ from the activity that has been taking place at this building since the 1960’s.

It was also considered that there will be no intensification of the building in terms of noise that would impact nearby neighbouring residents.

The Council’s Environmental Health Section has been consulted on the proposal and responded with no objections.

There are no windows proposed on the elevations that front on to the existing dwellings, so there are no concerns with regards to overlooking.

It was considered that neighbouring residents will not be significantly impacted by the change of use.

In terms of access, movement and parking, the standards require that the church provides one parking space per three seats provided within the church.

The report said that the auditorium has 167 seats and therefore normal provision should be 56 spaces.

Whilst it was noted there is no car parking available on the application site, there is however a large public carpark located some 80 metres to the southeast of the application site off Bridge Street, along with other town centre carparks within easy walking distance.

DfI Roads has been consulted and has no objection to the proposal.

As a result, council officers have recommended that the proposal for change of use be approved.