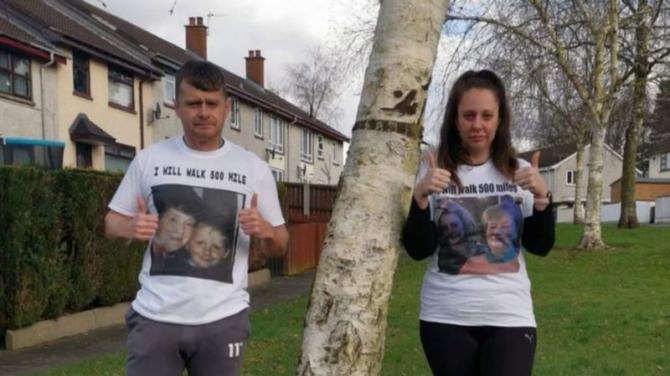 A PAIR of Antrim siblings are set to follow in the footsteps of Scottish hitmaker twins The Proclaimers by walking 500 miles for charity.

Lyndsay Moore, who now lives in Randalstown, and her brother David Steen, who still lives in Steeple, are pounding the pavements for Chest Heart and Stroke between February 11 to May 11, with an initial target of £500.

Lyndsay said: “My Nanny passed away in August and we wanted to do something special for her first birthday in Heaven, May 11.

“She loved the song from The Proclaimers with the famous line ‘I would walk 500 miles’ so we decided to honour her by doing it literally, for charity, in her honour.”

Mavis Hamilton (below right) was well known in the town and up until the first lockdown in 2020 had been a Brownie leader at High Street for 44 years.

Her favourite song, I’m Gonna Be (500 Miles) was first released as the lead single from the 1988 album Sunshine on Leith by The Proclaimers, otherwise known as twins Craig and Charlie Reid.

The song reached number 11 in the UK Singles Chart on its initial release and has since become their most popular song worldwide.

In 1993, following its appearance in the American film Benny & Joon, the song was released in North America and many other countries around the world and reached number three on the Billboard Hot 100 in the United States.

In 2007, it received yet another new lease of life when The Proclaimers re-recorded the song with English comedians Peter Kay and Matt Lucas for the UK’s Comic Relief charity telethon, scoring a number one hit in the UK.

Reid has said that the band’s earnings from the song are about five times the rest of their catalogue combined.

Lyndsay, who works full time as a nurse and home schools her kids, and David, who is working from home and cannot get out to walk until after 5pm, are squeezing in every spare mile that they can.

“Every mile counts, even if that means walking round the house and doing the chores or going up and down the lane!” she said.

“I was driving home from work one night and we wanted to do something for her birthday, and the idea popped into my head, we worked it out and found out it was doable if we did six miles every day.

“On the first day, I put the song on and walked from the graveyard in Antrim to Templepatrick.

“My legs were aching and I was thinking of giving up, when a wee robin popped out of the hedge and then scurried away.

“I thought, if that’s you Nanny, coming to visit me, come back out again, and the wee bird did and I was able to take a picture of it and it followed me part of the way.

“Things like that make all the hard work worth it.”

Lyndsay added: “Chest Heart and Stroke has sent us t-shirts and sponsorship forms for those who don’t want to donate online, so we are hoping that people will support us and give us a wave if they see us out and about!”

You can donate by logging on to https://www.justgiving.com/

fundraising/mavishamilton or through the Facebook fundraising page ‘Charity Fundraising In Memory of Mavis Hamilton’.