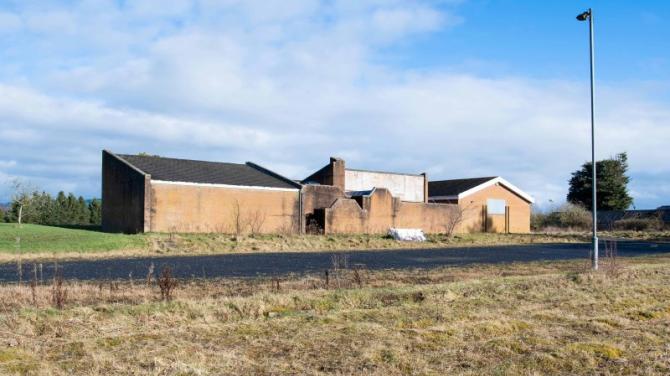 WITH council coffers running low because of the COVID crisis, the body looks set to take the unusual step of moving into the property development game, with outline plans for two dwellings at the site of the former Antrim Rugby Club.

The proposal for two detached two storey dwellings and double garages at the derelict site at 43 Castle Road, Kilbegs, is set to come before the Planning Committee this week and has been recommended for approval.

The site comprises the former rugby club, a red brick single storey building and is accessed via the same access to the Allen Park sports complex.

Beyond the site to the north there are playing fields associated with Allen Park, a number of houses and Chimney Corner Football Club.

There were no objections from consultees. Seven neighbouring properties were notified and no letters of representation were received.

In report by council officers, they considered that appropriately designed dwellings could be erected on site that would have no significant adverse impact on the residential amenity experienced at existing properties.

They also noted that the site would benefit from landscaping to both the southern (roadside) and northern boundaries to aid the integration of the dwellings.

The officers concluded that the proposed buildings ‘will help consolidate the existing build up of development and not further erode the character through an extension or sprawl’.

As the application seeks outline permission, no details have been provided regarding the proposed design of the dwelling.

However, it is considered that appropriately designed dwellings could be erected on site that would have no significant adverse impact on the residential amenity experienced at existing residential properties given the separation distances that will exist.

In terms of ‘other matters’, because of the volume of traffic between Antrim and Randalstown and on to the M2 motorway, the Castle Road is a protected route.

The report said: “Given the previous use of the site as a rugby club it is considered that an intensification of the use of the access would not occur given the proposed use is for two dwellings.

“DfI Roads have been consulted on the proposal and have no objections although they have indicated that the access to Allen Park would benefit from being upgraded, however, given that there is no intensification of the access this is not a requirement.”

Overall, it was considered that the

principle of the development is acceptable., the dwellings will integrate into the surrounding area, there will be no detriment caused to the rural character of the area and neighbouring residential properties will not be significantly impacted by the proposal.

There are a number of conditions attached to the recommendation, including approval of the details of the design and external appearance of the buildings and landscaping by the council.

No development shall take place until a landscaping scheme has been submitted to and approved by the council showing the location, numbers, species and sizes of trees and shrubs to be planted.

Trees or shrubs dying, removed or becoming seriously damaged within five years of being planted shall be replaced in the next planting season with others of a similar size and species unless the Council gives written consent to any variation.

A scale plan shall also be submitted to ensure there is a satisfactory means of access in the interests of road safety and the convenience of road users.