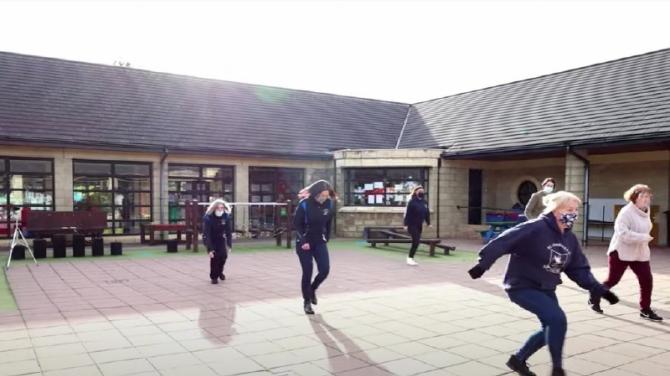 IT’S the dance craze that has been sweeping the world - and now the young people of Crumlin and their carers have been getting in on the act.

The dance trend began in February of last year, when Fenómenos do Semba, a group in Angola, south-west Africa, recorded themselves dancing to the song while eating and without dropping their plates.

The impressive dance started being copied almost immediately, before exploding into the mainstream of the western world in early 2021.

While the song is in the Zulu language, it has become popular across the globe, reaching number one spot in the charts in multiple European countries including Belgium, Netherlands and Switzerland.

And it was the Swiss Federal Office of Police who challenged the Irish Garda Síochána to the Jerusalema dance challenge, which they accepted.

Their picturesque performances at a number of Irish landmarks went viral, and the Swiss hung an Irish flag from their police headquarters in tribute.

Now the teaching community of Crumlin and some of the older students have performed their version of the dance, with pupils and staff at Crumlin Integrated College and Primary, St Joseph’s Primary, Sleepy Hollow and Oaktree preschool groups and Gaelscoil Ghleann Darach all taking part (see screengrab below).

A video of the dance on YouTube has received almost 3,000 views and is dedicated to all the children of the town, with the message ‘we are so proud of you’.