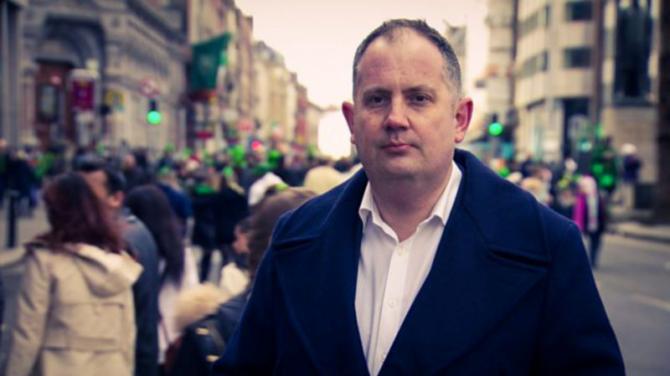 WHEN he’s not working on his latest scoop, former Antrim Guardian reporter Conor Spackman is often hunched over the chess board.

He has won a clutch of titles in recent years - his unerring knack for thinking three or four moves ahead making him a formidable opponent.

And down the years he has brought the same discipline to the newsroom at BBC Belfast.

Since leaving Antrim he has worked with Panorama and more recently Spotlight, creating an award-winning body of investigative work.

It was Conor who first broke the news of the RHI scandal, and he has gone on to make no fewer than three films on the subject.

The story sent shockwaves along the corridors of power, and contributed to the collapse of Stormont.

Gambling machines, windfarms, Brexit have all fallen under his forensic gaze since then - but who can forget the role that he played in the Panama Paper controversy which very nearly led to the fall of then Prime Minister David Cameron?

The Panama Papers truly was global news, lifting the lid on the extraordinary lengths the super rich could go to hide their wealth.

Hundreds of journalists, working for 107 media organisations in 76 countries collaborated on the shocking expose into the papers leaked by the notoriously secretive Panamanian law firm Mossack Fonseca.

Together they trawled through 11.5 million documents, uncovering disturbing evidence of money laundering and tax avoidance on an epic scale.

World leaders were embroiled too. The Icelandic PM was the first to fall on his sword.

It was an uncomfortable time for David Cameron too, with his father Ian’s links to Mossack Fonseca and his own off-shore shares sparking dozens of national front page headlines and the bumpiest of bumpy rides at Prime Minister’s Questions.

And he had Conor Spackman to thank for that - for it was the intrepid local reporter who charted a course through the labyrinthine mountain of documents to follow the Panamanian paper trail right the way back to Number 10.

Conor cut his journalistic teeth at the Antrim Guardian, joining the team in 2004.

During his three years with the paper he raised heckles at the Civic Centre with a string of provocative pieces - once memorably interrupting a meeting of Antrim Council when he felt that members went to far criticising the unwanted ‘press intrusion’ into their affairs!

The Oxford graduate eventually moved on to the BBC, working extensively on radio and television.

RHI has certainly bolstered his reputation, but he still looks back fondly at the Panama probe.

“I had worked on Panorama’s expose of HSBC which was also based on a data leak which aired in February 2015,” he said.

“Just a couple of months later I heard that Panorama was once again co-operating with the International Consortium of Investigative Journalists on a date leak - one that would dwarf HSBC and in fact all other previous data links combined.

“Even at that stage there was talk that the data would raise serious questions for several serving world leaders as well as some who had left the stage.

“As Panorama assembled a team of researchers to comb through the documents, I was lucky enough to get an invite to take part.

“Months were set aside. It was the biggest journalistic endeavour any of us had ever been involved in.”

“When I finally got access to the data, it was my first search. Bingo!

“There were hundreds of documents shedding new light on Blairmore Holdings. This project in itself took weeks to unravel with many of us becoming relative experts in the murky world of offshore finances.

“Blairmore was only one of many such projects, and at times we wondered if we’d ever reach the end.

“We did - and the reaction around the world made every late night worth it.”

Panorama boss Andy Head tipped his hat to the team - singling out the local man for particular praise.

“Nobody in the Panorama team had ever seen anything quite like it,” said Andy.

“One of our producers, James Oliver, is a member of the International Consortium of Investigative Journalists and the Belfast office where he works has investigated big data leaks in the past.

“But the Panama Papers were on a completely different scale. Where do you begin when you have 11 million documents to look at?

“This was a project that would take 10 months and the budget was stretched, so most of the searching fell to just two researchers.

“David Thompson and Conor Spackman spent hundreds of hours going through document after document as they searched for the journalistic needle in the haysack.”

But the former Antrim Guardian man gave them the incentive to dig deeper after he struck gold.

It was painstaking work, but slowly truly global stories began to emerge.

“It was like being given the keys to the investigative candy shop. You could pick which stories you were interested in , take some advice and then plunge back into the documents to find the evidence.

“The international collaboration paid off. The volume and quality of stories from our partners ensured that the Panama Papers dominated headlines around the world.

“It felt like a sea change in the way investigative journalists work. The reporters on the Suddeutsche Zeitung who obtained the leak could have kept the documents for themselves, but they may never have been fully investigated.

“By sharing - rather than scooping - they created the biggest story about tax havens the world has ever seen.”

So what’s Conor working on now?

You can rest assured that you will read all about it when this chess master makes his next move.