The birth of Bond 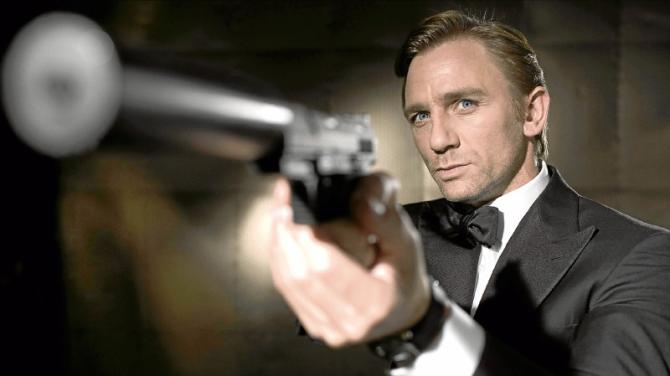 JAMES Bond is not renowned for his patience, but some problems can not be resolved with a trusty Walther PPK.

Yes, the ice cool super spy has spent the last year in lockdown, with COVID restrictions forcing the 25th film in the long-running franchise to stay firmly under wraps.

But ‘No Time to Die’ is almost here. Well, that’s the plan anyway.

It was initially scheduled for release on April 3 2020, slap bang in the middle of the first lockdown.

Perhaps reflecting the optimism of the time, studio chiefs reasoned that it would all be over and done with by Christmas and penciled in a new release date for November.

That never happened, of course, and an already bruised Bond was kicked further up the road to April 2 2021 - before being shifted for a third time to October 8.

With the vaccination programme gathering pace, Daniel Craig’s last hurrah as 007 seems to be locked in - though when it comes to U-turns, as we have seen, nobody does it better...

With so much at stake, they will undoubtedly get there in the end. But where, you might ask, did it all begin?

The answer is rather closer to home than many fans realise.

Like James Bond, his most famous creations, author Ian Fleming enjoyed a jet set life and loved the company of glamorous women.

He also liked a drink, though seldom a Martini. His poison was vodka - and he was not fussy if it was shaken or stirred.

Yet the former naval intelligence officer had a strange affinity with the Borough of Antrim, particularly the Shane’s Castle estate.

Who would have guessed that the man behind cinema’s most enduring creation spent many happy days exploring the 1,800 acre estate - spending hours on the battlements looking out over a blustery and wild Lough Neagh?

Particularly at Christmas. He always felt there was something special about Shane’s Castle over the festive period - and in his letters he revealed that he cherished the simple pleasures of scrabble, bridge and table tennis, scarfing stilton, tangerines and smoked salmon. Washed down, of course, with the odd vodka.

But where did this link begin, and how did it continue right up to and indeed beyond his death more than half a century ago?

Perhaps it is apt that this is a steamy tale of sex, scandal and betrayal. 007 would undoubtedly approve.

At the heart of the story is Ann Charteris, the beautiful young socialite who married Lord O’Neill in 1932.

Initially both she and husband Shane had a happy marriage, and their union produced two children - Raymond, the current Lord O’Neill, and his younger sister Fionn.

But by the decade’s end war clouds were gathering over Europe, and deep cracks were opening in the marriage. Faced with the choice of facing hostilities on the home front or in Europe, Shane heeded his country’s call and enlisted for action.

Around this time she also met a dashing young military man called Ian Lancaster Fleming, and the attraction was both instant and mutual.

But it was a family tragedy that proved to be the catalyst. In 1944 Lord O’Neill was mortally wounded, laying down his life for King and country.

At the tender age of just 11, Raymond O’Neill was elevated to the position of Lord - but he would not be the only man of the house.

Correspondence from the time revealed that Ann ‘expected’ Fleming to make his move and ask for her hand, but he was having none of it.

Not unlike a certain secret agent to come, Mr Fleming was happy to enjoy the high life with no strings attached. Seizing his opportunity, spurned rival Harmsworth swooped in.

He proposed and the couple were married on June 28 1945, but it seems that Ann was still irresistibly drawn to Fleming.

Within a year they had reignited their fiery affair after a passionate rendezvous in New York. It continued in Jamaica after Ann hoodwinked her new husband that she was paying a visit to his old friend and neighbour, Noel Coward.

The marriage was doomed and Lord Rothermere eventually threw down the gauntlet to his errant wife. There wasn’t room for three people in the marriage, so she had to choose.

In the end, events overtook them. In 1951 Ann discovered she was pregnant - and her husband was not the father.

Divorce papers were duly served and Ann told the children of her intentions as they returned to Oxfordshire from Christmas at Shane’s Castle.

It was been claimed that Raymond was not so sure that the rakish writer offered her the security she craved, but Fionn was delighted - reportedly glad to be free of her stand-offish and stuffy stepdad.

Or was she? In 2019 Fionn, a fine writer who is preparing to publish her own memoir of Ian and Ann to coincide with the launch of the latest 007 blockbuster, contacted the Antrim Guardian to defend the memory of Lord Rothermere.

“It is not true that I ever thought Esmond Rothermere ‘stand-offish and stuffy’.

“Esmond was a shy man and did not engage with us. We may have lived in the same house but we lived on different floors and had little to do with him.

“My mother wrote - ‘Esmond, remote as the North Pole’.

“I remember him with affection. He was a kindly man.”

Nevertheless, on March 24, 1952 Ann and Ian finally tied the knot. Their only child Casper arrived five months later on August 12.

That same year Fleming finished the first of the Bond novels that would go on to sell over 100 million copies.

The family lived a lifestyle that could have been drawn from those pages, sharing their time between London, Jamaica and Kent - with regular visits across the Irish Sea to Shane’s Castle, where he would conjure up new scrapes for Bond.

Young Casper, who Fleming nick-named 003-and-a-half, was particularly fond of the estate and its rugged coastline, ancient woods and creepy ruins.

Fleming happily fed his interest in history, buying him books and touring antique shops during their trips to far-flung places.

Like many men of his time, he was a fond if not overly attentive father - but then how many dads could write something like ‘Chitty Chitty Bang Bang’ as a special gift?

But make no mistake, marriage had not domesticated him. He had a string of mistresses, some of them serious - including Blanche Blackwell, a prominent socialite.

Eventually Ann also strayed, and was romantically linked for a time with Hugh Gaitskell, the leader of the Labour Party.

Women were not Ian’s only vice. He always had a cigarette in his hand, only putting it down to raise a glass. It was a ticking timebomb - and it finally exploded on August 11, 1964 when he suffered a massive heart attack.

He died the next day, aged just 56. By cruel coincidence it was Casper’s 12th birthday.

The young lad was already struggling to cope with his father’s global fame and was said to have taken barbiturates to help him sleep from a young age. The loss of his father hit him hard, and he lashed out at the people closest to him.

“Casper hates me and talks of little but matricide,” wrote Ann to novelist Evelyn Waugh during this period. “What shall I do?”

Though a bright student, Casper regularly got into trouble at Eton, including a brush with the law when he was 16 when a loaded revolver was found in his room. He also had a passion for swordsticks, daggers, pistols and steel crossbows. Not unlike a certain Mr Bond.

He dropped out of Oxford too, but by then he had access to a £300,000 trust fund left by his father. However, instead of bringing order, it brought chaos.

He developed a drug habit and in 1974 he made the first attempt on his life, taking an overdose and swimming out to sea. During the following year there were spells in psychiatric hospitals where he was treated for depression.

“He would go searching for arrowheads. He was an archaeologist. That was his great love.”

Yet somehow during that carefree visit it seems that the 23-year-old decided that he would never return.

A week later he was in his mother’s flat in Chelsea and he penned a short note which read: ‘If it is not this time it will be the next.’

After consuming a deadly dose of barbiturates he calmly lay down to die. Sadly, he succeeded.

“It was dreadful when he died,” Lady O’Neill later recalled.

“He got in with a crowd at Oxford who took drugs. I don’t suppose that helped. Casper was very clever but he suffered from depression - a lot of the family did.”

Ann was devastated. She took to the drink to numb the pain and died from cancer in 1981.

A sad, final chapter to be sure.

But the Fleming name lives on, and might yet outlive the ancient rock of Shane’s Castle.

‘Skyfall’, the 23rd film in the long-running franchise took over one billion dollars at the global box office. The Bond business is still booming.

Lord Raymond O’Neill still resides on the family estate. A keen environmentalist, he was appointed Knight Commander of the Royal Victorian Order after he relinquished the title of Lord Lieutenant of County Antrim.

As stepson of Ian Flaming and nephew of Northern Ireland Prime Minister Terence O’Neill, his truly has been a remarkable life.

And if the walls of Shane’s Castle could talk, what a story they would tell!