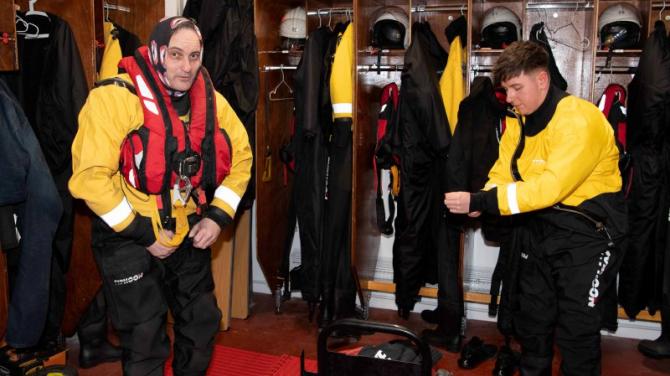 AT roughly 20 miles long and nine miles wide, Lough Neagh is the largest lake in the British Isles.

It is generally shallow with an average depth in the general body of around 30 feet but it is very shallow round the margins.

The lough is very exposed and in windy conditions it can become extremely rough very quickly.

It is used extensively by a wide variety of recreational and commercial craft.

And it can be very, very dangerous.

That night there was no lifeboat service to mount an effective search and rescue mission, although local people did manage to locate David’s three friends before they succumbed to the cold from having spent five hours in the water.

The provision of a lifeboat service became David Gray senior’s mission, and to progress this he enlisted the help of the three men who assisted in the search for his son that night.

For the next 20 years, and to this day they would help to construct the Lifeboat service that we have now.

David’s first job was to raise the funds necessary to put the first boat on the Lough and from his own savings and with the help of Craigavon Borough Council he raised the £ 20,000 needed to supply the Lifeboat which was named ‘Bungy’ in memory of his son.

A crew was then raised from local volunteers who eagerly set to training every Tuesday night. Paddy Prunty, RYA Powerboat Trainer and Yacht master was to become the first Training Officer of the organisation.

Training was methodical and practical it was designed to furnish each crew-member with the skills necessary to deal with any situation they may be likely to encounter in daytime or at night. A total of 30 crew turned up initially but these were finally whittled down to 18.

During May 1990 HM Coastguard Belfast erected a new aerial on Black Mountain to give VHF cover to Lough Neagh. This historic development meant that all users of the lough would have the same protection as people on the Irish Sea.

Being in Lough Neagh Rescue in the early days was difficult to say the least. The crew had basic waterproofs and lifejackets to man the boats - indeed some have even confessed to wearing women’s tights to keep out the cold.

It was soon acknowledged that this situation could not continue and the hunt for money to properly equip the crew was on.

Not content with providing one lifeboat, David Gray and others at the request of the organisation went in search of new funding so that L.N.R. could enhance its rescue coverage by stationing another boat on the Lough and also to purchase some greatly needed safety kit for the crew.

David succeeded in his task in 1991 when he was awarded a £ 60.000 grant from the Northern Ireland Office. This money was wisely spent on vital equipment and also to purchase the second lifeboat for Lough Neagh, which was to be stationed at the Battery Harbour Ardboe in June of that year.

The name of this lifeboat was to be the ‘David Gray’ in honour of the man who had made Lough Neagh Rescue possible.

The Ardboe Lifeboat was officially launched in June 1991, and to make preparations for its arrival, a local crew was raised and trained. In the following years the Ardboe crew where to make a significant contribution to the organisation and to play a vital role in expanding Lough Neagh Rescues capabilities

Despite the increased rescue cover Lough Neagh was soon to be the scene of another drowning tragedy. On a balmy summer evening in 1994 Gary Breen a young man who lived near the Lough shore, died as he attempted to swim ashore from his boat which had earlier broken down.

His father Dessie Breen and a number of family friends grouped together and managed to raise the capital to provide a third vessel for Lough Neagh Rescue. This boat was to bear the name Gary Breen and was to fulfil a vital support role for the lifeboat service.

More recently, Antrim has become another important hub for LNR. Supported by Antrim and Newtownabbey Council, they have made their presence felt by leading numerous successful operations.

The rest of their income is from private donations and is a very necessary part of our financing package.

“Lough Neagh Rescue is mindful that if it were not for the generosity of the aforementioned then we would find it impossible to continue,” said a spokesman.

“Lough Neagh Rescue are regarded as equals among the other Emergency services within Northern Ireland and regularly train and liaise with them to share experiences and knowledge.”

They may have been born from tragedy, but in the years since it is undoubtedly true that they have prevented many more.