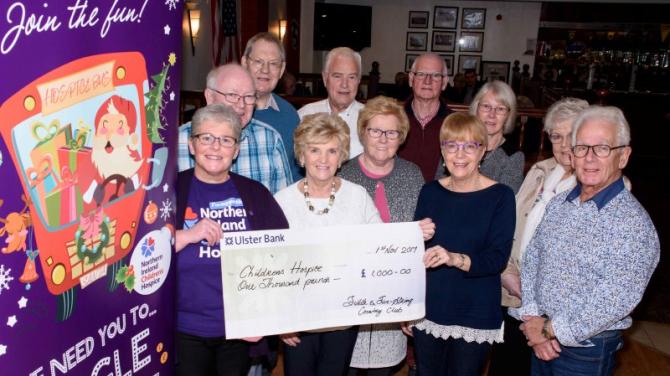 WITH its roots set amidst the crushed velvet, flares and kipper ties of the early 1970s, no one can be certain of exactly when the Fiddle and Five String Country Music Club was formed, but September 1972 could be described as a conservative estimate.

Before this, a number of people would meet in the Black Bull bar in Randalstown to listen to local musicians Tommy Lindsey and Leslie Young play and sing on Wednesday evenings and occasionally some would join in and add their own voices.

From these small beginnings, something special began to emerge.

Gordon and Maureen Hattrick were the driving force in forming the club, ably assisted by Brendan McGurgan and Ivor McNally.

Brendan’s brother Seamus was the first person to play the five string banjo on a visit to the club, whilst studying at Queen’s. He went on to play in Ireland’s top Bluegrass act, the ‘Knotty Pine String Band.

Having outgrown its original home and after a very brief stay in the Clanmore, the club took up residency in Paddy Marrion’s lounge in 1979, where they remained for over 25 years until Paddy's retirement.

From that point, it was felt that a new venue would boost interest in country music, which was by now beginning to flag in terms of popular appeal, so a move was made up the street to O’Kane’s bar, where the log fire on a cold winter’s night was a welcoming sight and many an enjoyable evening was had.

The formation of the club coincided with the gradual demise of the Showband scene in Ireland, which at one time boasted more than 900 acts from all over Ireland, playing dance halls which were no more than giant sheds with little or no heating.

The dancing patrons of the 1970s were a little more selective that those of the 50s and 60s and began to drift towards smaller venues with better conditions, which in turn meant that the seven and eight piece bands could not command the fees necessary in order to enable them to survive.

Due to this, some of the top showbands decamped to places like Las Vegas, Boston and Canada, where they could command high fees and draw large crowds.

Faced with smaller and fewer venues, many of the bands reorganised themselves into three or four piece groups and concentrated on the local lounge bar and social club scene.

So vibrant was the social club scene at this time, that musicians could do a full-time job on week days and follow their musical career at weekends.

This meant a three-hour set instead of five in the dance halls, and there was not the same amount of travel as in the showband days.

The clubs usually had music on Thursdays, Fridays and Saturdays and occasionally Sundays. With this in mind, the organisers in those days approached some bands and explained the objective of the club would be to raise money for good causes and asked if they would be prepared to play Wednesday nights for a reduced fee.

This was readily agreed to, so the bands could try out a few numbers outside of their usual programme.

Other familiar names included Cliff Leger, Fleetwood, Coasters and Country Way. Most of these acts are no longer in existence but occasionally an old timer will remark: “You know I played this club 35 or 40 years ago!”

Sadly some of the members are no longer with us either, but the good memories live on.

While it is almost impossible to pinpoint founder members from very early on, Norman Rainey has the distinction of having the longest continuous membership.

Another former drummer and regular attendee is Jimmy Donnelly who played with Canadian Pacific and he would often sing a song when requested!

Over the years, the emphasis has been on fund raising for local charities including the Children’s Hospice, Tiny Life, Chest Heart and Stroke, MS Research, Cancer Research, the Motor Neurone Society and even Crosskennan Lane Animal Sanctuary.

Before lockdown, the club met on the first Wednesday of each month in Randalstown Rugby Club.

Hopefully it will not be too long before they’re back.