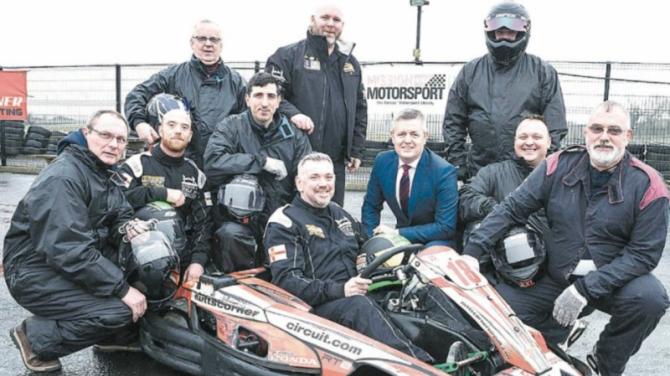 OCCASSIONALLY truth really can be stranger than fiction.

When the men of Antrim marched off to fight in the Great War none of them could have guessed that their noble sacrifice would help their brothers in arms one century on.

Yet a huge charitable gesture from a former Antrim Guardian reporter did indeed help a trail-blazing sporting project to allow injured servicemen and women get under starter’s orders.

In 2016 Alvin McCaig finally unveiled ‘Antrim in the Trenches’, the definitive study of the locals who fought and died in World War One.

It may have taken several years of arduous research, but the Antrim man decided not to charge for the book, instead suggesting that readers make a contribution to Help for Heroes.

And local people were only too happy oblige, donating well over £1,000 to the worthy cause.

A book about the horrors of war was effectively helping soldiers who had experienced them first hand - just as Alvin intended.

“Many of the local men who fought in the Great War were injured, often suffering a life-long disability,” he said.

“So when the book was launched I thought Help for Heroes was perfect for those wanting to make a donation. when they received a copy.”

The following year it emerged that the money would be helping heroes very close to home.

Mission Motorsport Northern Ireland, based at Nutts Corner Motorsports Centre, works with the charity to offer support to injured service people by helping them get their lives back on track - both through practical advice on employment and recreation.

Alderman Paul Michael, the chairman of the Antrim Branch of the Royal British Legion, said he was ‘hugely impressed’ by the project.

“I think it’s fantastic that Mission Motorsport offers special support for personnel who have been deeply affected by their service.

“I also think we owe Alvin McCaig a huge debt of gratitude. Not only has he compiled an extraordinary book about every local people who served in the First World War, but he has generously decided not to take a penny for it.

“Instead the money is going full circle to help the men and women whose lives have been changed through their service. What a wonderful gesture - and what a fantastic book.”

The money was accepted by local man Chris McFadyen. He had experienced first hand the difference that Help for Heroes can make to lives damaged in times of war.

After leaving school he embarked on an electrical apprenticeship, but just a few months in he dropped out and joined the Royal Navy. A natural sailor, he later enlisted with the Special Boat Service - an elite unit which is the naval equivalent of the SAS.

His career would take him all over the world, but it came to an abrupt halt in 2004 when he was injured on active service on an amphibious assault vessel.

Since then there have been endless operations, replacing sections of his damaged spine with metal.

“There’s not much bone left, but they’re doing their best!” he told the Guardian.

After he was medically discharged from the Navy he attempted to go back to work, until his deteriorating health made that impossible.

“I suppose I was in denial at the time,” he said.

“It was a tough time. You miss the life, the brotherhood that comes with service.

“It’s never easy. One day you have a purpose and the next you are at home feeding the dog. Some find it very hard to adapt.”

He was facing just that quandary when his wife Paula, who also hails from Antrim, suggested that he add another string to his bow. Literally.

“She suggested that I try archery and I thought ‘why not. I’ve fired practically everything else’.”

And she was right. It soon became clear that Chris was naturally gifted, and soon he was competing at a high standard - operations not withstanding.

He was coaching too, his infectious enthusiasm helping others to up their game. Before long the Antrim man even received the Royal seal of approval.

Inspired by the Warrior Games for injured servicemen and women in the United States, Prince Harry launched the Invictus Games in March 2014 - and Chris saw an opportunity to rekindle the camaraderie of his days serving Queen and country.

“It was great. You were part of the old band of brothers again. The years just rolled back.”

His proficiency was recognised when he was made captain of the archery team at the 2016 Games in Florida - and he certainly delivered the goods, taking silver in the individual event and a gold in the team competition.

“It was a fantastic experience and I must say I was very proud when I received my medals. Everyone there had overcome personal adversity, so it was really inspirational.”

And Chris credited the success of the Games to his new pal Harry.

“He’s there when you are training, he’s there at your weakest moments and at your strongest. He consoles you when you’re down and celebrates with you in your success.

“He really is an endearing, genuine guy. The public love him - and you can see why.

“He did his service. He didn’t want any special treatment, and I think that’s why he is such a rounded individual.

“He goes that extra mile, be it with his Heads Together campaign or landmine projects in Africa and Afghanistan. You can’t help but be impressed by him.”

Undoubtedly the feeling is mutual.

Chris also threw himself into his work with Help for Heroes.

He’s a busy man - but then these wounded warriors deserve no less.