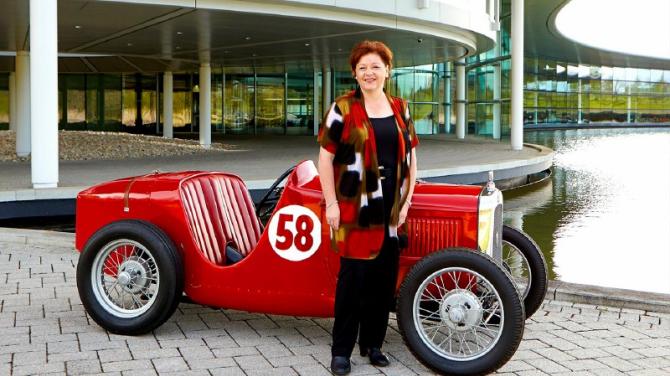 WHEN you think of the world-beating McLaren racing team, a small family farm in Glenavy is perhaps not the first place that leaps to mind.

Yet there is a special connection, which has been cemented this week with a special gift from the daughter of the man who created the F1 behemoth.

This doll will be displayed at the Trust’s Ballance House museum and events centre in Glenavy, which is currently being revamped to reopen later this year.

This was the birthplace of John Ballance - a local man who certainly went on to make his mark on the world stage.

As New Zealand Prime Minister in the 1890s this liberal Ulsterman helped ensure the franchise was extended to Maoris and women - making it the first nation in the world to give females the vote.

Better still, his first racing car was an Austin 7 Ulster!

Bruce moved to the UK and founded the McLaren Motor Racing Company, which continues to compete successfully at the very highest level in this sport.

Sadly Bruce McLaren did not live to see the global powerhouse his company would become.

He died, aged just 32, when his Can-Am car crashed on the Lavant Straight just before Woodcote corner at Goodwood Circuit in England on 2 June 1970.

He had been testing the vehicle when the rear bodywork came adrift at speed. The loss of aerodynamic downforce destabilised the car, which spun, left the track, and hit a bunker used as a flag station.

“Dad was killed doing what he loved,” said Amanda.

“Mum protected me from the trauma of his death at the time and I’m incredibly proud of what my father achieved in such a short lifetime.”

He continues to cast a huge shadow over motorsport and his legacy lives on.

For the 2021 season the McLaren F1 drivers will be Lando Norris, 21, from the UK and 31-year-old Australian Daniel Ricciardo.