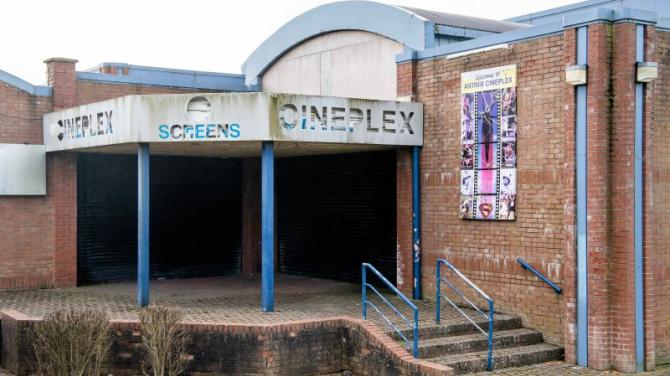 IT was not the ending anyone wanted to see.

When Antrim Cineplex threw open its doors on October 28 1994 it was warmly embraced by a town which had been starved of cinema since the late 1970s.

It seemed to have it all: four screens, 819 seats and it was run by the Rutherford family, cinema veterans who had the film biz pumping in their veins.

Yet less than 20 years later the final curtain finally fell.

So what went wrong?

Back in February 2013 manager Lee Rutherford admitted that the Cineplex was hanging on by its fingertips.

The challenges facing traditional old-school pictures houses were huge, with multi channel TV, streaming services and the relentless march of the digital chains assailing them from all sides.

If it were on the big screen, this David and Goliath story would be a disaster epic, but he was reluctant to walk away. He still believed that sometimes, just sometimes, ‘the good guy wins’ and makes it all the way to the final credits.

He may have been standing in the way of progress, but he wasn’t giving up without a fight.

Cheering him on were a legion of local film fans. The crowds may have dwindled but there were hardcore, loyal supporters who returned week in, week out to the Cineplex.

They remembered what it was like when a wrecking ball smashed through the old Antrim Cinema to make the way for a new road. That move denied a whole generation the pleasure of a night out ‘at the pictures’.

One of those deprived youngsters was top UK critic and film scholar Mark Cousins who went on to become an award-winning director - not bad for an Antrim lad who grew up in a town without a cinema!

During those barren years the council did its best, regularly screening films in the former theatre at Clotworthy House. Prints, however, were notoriously difficult to source and the bill was ‘fluid’ to say the least.

The show must go on, of course, but try telling that to the unruly teens who had turned out to see The Return of the Jedi but ended up with The Sting 2!

Fast forward to 1994 when Ronnie Rutherford, Lee’s dad, cut a deal to build an all-singing, all-dancing cinema at Fountain Hill.

Initially the plan had been to transform the whole site for entertainment, with bowling allies, ice skating and fast food restaurants.

That never happened, of course, to the consternation of some - but in those early days they didn’t seem to mind the script being hastily re-written.

The dark ages were finally over and a grateful audience eagerly lapped it up. There was no business like show business - and business was booming.

“I was just starting out myself when we opened in Antrim, so I still remember that period so vividly,” said Lee.

“Some people thought we were mad investing so much in the town.

“They reckoned that because there hadn’t been a cinema in the area since the 70s the habit of spending a few quid to go out and see a film simply wasn’t there.

“Thankfully they were wrong!

“Back then I was working up in the projection room, running the machines and splicing the films together. I remember when I was a kid watching the guys doing the same back at The Strand.

“They all had their own projection rooms and when it was show time they could not and would not be disturbed.

“They took their job very seriously. They were responsible for ensuring the crowd had a good night out, and I learned a lot from that.

“That’s not to say there haven’t been a few mistakes along the way.

“I remember splicing the reels of Forrest Gump together to show at Antrim. It was, and still is, done by hand and by the end I was quite proud of myself.

“One of the guys who had helped build the Cineplex was in and he told me that he had enjoyed the film - up until the part when it started running upside down!

“Suffice to say I had a bit of work to do before the evening showing.

“To me, though, the projection room is a magical place. In Antrim it is all open plan and I love being up there when we have four films running. It’s a hand on job, but it’s very rewarding.”

He conceded, however, that it was ‘a dying art’.

“New cinemas are all digital so, for some, film is old hat now. And that’s a real shame.”

More than that, it was a ticking timebomb for the Cineplex.

But by 2013 the tide was turning against them, with some big studios announcing that they would not longer by supporting this ‘obsolete’ technology.

Short of a huge investment in new tech, and that seemed unlikely, time was running out.

It was all worlds away from those halcyon early days.

Lee said some films lingered on in his mind - the mega-hits that guaranteed full houses night after night.

“There have been a few films that really struck a chord with audiences in Antrim,” he said.

“Titanic was absolutely huge, as was Mama Mia.

“I remember I was away on holiday at the time and I got a call from the Guardian about punters queuing around the block to see that one, and I must say it made any worries about taking the break disappear!”

He added it was those devoted punters who made the years in Antrim ‘an absolute joy’.

“There are children I first saw coming in with their mums and dads, who then started going tot he cinema with their boyfriends and girlfriends. Now they are bringing their kids and that’s fantastic to see.

“We have built up so many special friendships and I would like to thank each and every one of them for their support down the years.

“When we first opened off Stiles Way we didn’t know how we would be received. Looking back now I can say we needn’t have worried. This community has welcomed us and made us feel very much at home.”

But he could not ignore the harsh economic realities.

“No-one can ignore the fact that most people have less money in their pockets, but we pride ourselves on offering the cheapest tickets anywhere in Northern Ireland - half the price asked by some in fact.

“Everyone is out to make a few quid, but our philosophy has always been to treat the customer right and they will come back, again and again.

“Some people wait until the buzz has died down before cutting the cost, but we’re up front with our customers, so every ticket sold before 7pm is £3.50 - and that includes new films.

“We’re doing out best, but we need the backing. I would love to be here in another 18 years, but that can only happen if people drop by every now and then.

But if the audience stayed away, Lee said he was ‘hopeful’ that they could go out and find them.

He was in talks with the council to roll out Antrim’s first ever driven in cinema.

“I think it would be fantastic. Can you imagine watching Grease down at the links of the Lough shore on a Friday night listening to the songs on your radio? It would be great craic.”

Another option was to follow in the footsteps of their other cinema, The Strand, and introduce live music and comedy to the mix.

“I wouldn’t rule anything out. If we could get an Entertainment Licence it would be great to see how that would down with a lively Antrim crowd.

“No-one wants to see these places boarded up so we may have to diversify to survive.”

The show could go on. It was up to the people of Antrim to decide for how long.

Alas, the optimism was to be short-lived.

Lee and the team battled on for the rest of 2013, but the odds against them were overwhelming.

By December they began their swan song, presenting screenings of their greatest hits. Titanic was back on the big screen for one night only, along with the likes of Forrest Gump.

The last picture show came just before Christmas with a showing of It’s a Wonderful Life, the ever-green classic that tells of one good man crushed by the ruthless forces of big business.

By year’s end The Strand was gone too, transformed into an arts centre.

The light at the end of the tunnel in the old projection rooms, it seems, has been snuffed out forever.

Antrim now has a cavernous new all-digital 10-screen Omniplex at The Junction, boasting ‘Ireland’s largest screen’. Something has been gained - but something has undoubtedly been lost along the way.