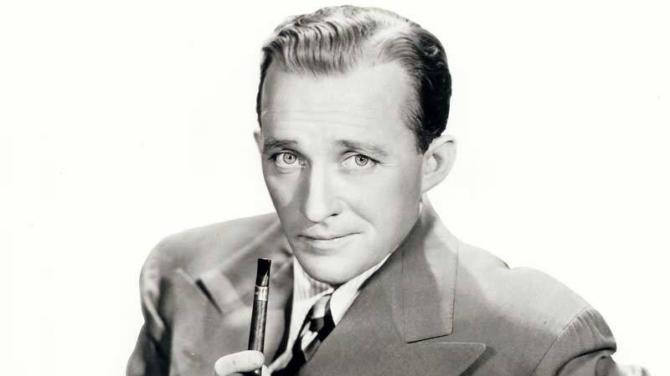 NESTLED within the pages of the October 13th, 1977 edition of the Antrim Guardian is a short feature in which local Bing Crosby superfan, Noel Mould, spoke of his unstinting efforts to book the American singing legend for a Northern Irish appearance.

The story exclusively revealed that there was ‘a strong possibility that Bing will sing in Belfast in the spring’.

But of course he never did for, in a cruel coincidence, the performer died just one day after the piece hit the shelves, suffering a massive heart attack on a Spanish golf course.

Mr Mould of Sussex Court - at the time a telephone engineer - was a devout enthusiast of the iconic ‘White Christmas’ crooner, reputedly owning a collection of over 1,000 of his records.

“I never really set out to collect his records, but I began watching him on films and the whole thing snowballed from there,” the Antrim man explained.

“Most of his songs are full of nostalgia.

“As there’s nothing really to look forward to today, I looked backwards through Bing’s music.

“There is much more to it than the singing.

“He has great charisma. People like Frank Sinatra, but you can’t get close to him. Bing is just like the fellow next door.”

Noel’s prized collection of Bing Crosby LPs drew awe and envy alike from other fans, many of whom were willing to part with substantial sums of money if only they could get their hands on some of the rarest albums from the star’s vast back catalogue.

“Quite recently I was offered £45 for one of Bing’s early LPs,” he recalled.

Adjusted for inflation, a bid of £45 in 1977 would be worth a pricey £254.65 today - and that notwithstanding the fact that said record’s worth has no doubt multiplied dramatically over the last 44 years.

A member of the International Crosby Circle - a fan club devoted to celebrating Bing’s fifty-year career during which he scored 396 hit records, more than Elvis and the Beatles combined - Noel was even invited to meet the singer in-person and was relieved to find that his idol was ‘easy going and very approachable’.

“He has friends all over the world because he is so easy to speak to,” he told the Antrim Guardian.

“He speaks to the lowest of the low and appreciates his followers.

“He has been more than good to me.”

The local man enjoyed fairly frequent contact with his musical hero in the weeks leading up to his passing.

At the beginning of October 1977, Noel set up an interview with Crosby on Downtown Radio during which he revealed that he would be interested in visiting Northern Ireland in the immediate future.

Noel quickly set about an attempt to organise a concert booking, but, as the Antrim Guardian reported, failed to seal the deal in such short notice due to Bing’s extremely busy schedule.

“Telephoning Bing, I heard the unfortunate news that he had been lined up for a charity concert in Brighton on the only date available at the King’s Hall - October 10th.”

Unbeknownst to Noel and the world at large, Bing’s performance at the Brighton Centre that day was to be his final public concert appearance before his death.

Indeed, the incorrigible performer’s final month had been a typically hectic one.

Having recovered from a ruptured back disc suffered earlier in the year at a 50th anniversary concert in California, during which he toppled 30 feet into an orchestra pit leading to a month in hospital, September found Bing embarking upon a concert tour of Britain that included a two-week residency at the London Palladium.

While in London, the multitasking musician found time to record his last complete album of new material, ‘Seasons’, and film his final Christmas television special - featuring a duet with David Bowie on the festive standard ‘Peace on Earth/Little Drummer Boy’.

The recording has since gone on to join Bing’s 50 million-selling 1942 single ‘White Christmas’ as a perennial Christmastime musical staple.

When news broke a month later of Bing’s unexpected death, David Bowie was unsurprisingly disconcerted. That same September that he sang with Bing for his final TV appearance, he had also played onstage with T. Rex glam rocker Marc Bolan in what would also prove to be his last filmed performance before his own death in a car accident a week later.

“I was getting seriously worried about whether I should appear on TV because everyone I was going on with was kicking it the following week,” he later wryly observed.

Yet, before Noel’s famous friend travelled to Spain for his final fateful game of golf, he would be influenced by the Antrim man to make some unorthodox recordings which would number as among his very last.

“Bing has recorded almost everything but poetry,” Noel said.

“When I put the point to him, he said he didn’t think it was a commercial proposition, but agreed to be taped.”

Mr Mould travelled to London’s CBS recording studios whilst Bing worked on the finishing touches of his very last LP and, on September 14th, successfully recorded him reading five pieces aloud, among them ‘If’ by Rudyard Kipling and ‘Lucy Gray’ by William Wordsworth.

“His voice is so easy on the ear. Indeed his speaking voice is music,” the local fan enthused.

When Bing Crosby’s ‘final chapter’- as the posthumously released ‘Seasons’ album was publicised - was finally reissued in CD format in 2010, Noel’s vision was fulfilled and poetry readings, namely of ‘Lucy Gray’ and ‘If’, finally featured alongside the traditional style pop ballads that Bing was renowned for.

Bing Crosby was in good spirits and seemingly good health when he flew alone to Spain on October 13th, 1977 to play golf and hunt partridge.

The following day, at the La Moraleja golf course near Madrid, he partnered up with World Cup champion Manuel Piñero to compete against club president César de Zulueta and Valentín Barrios over 18 holes.

At the ninth hole, construction workers building a house nearby recognised the living legend and asked for a song, upon which the obliging Crosby treated them to a spontaneous rendition of ‘Strangers in the Night’.

Upon the conclusion of the game, Bing and his party were walking back to their clubhouse when, suddenly, the 74-year-old singer silently dropped.

He made no effort to break his fall, having apparently instantaneously died of a massive heart attack.

Tragically, the Antrim Guardian’s optimistic forecast, published but one day before Bing’s demise, would never come to fruition.

“It won’t be too long before Noel and Bing- ‘like those couple of swells’- will ‘walk down the avenue’ on that road to Belfast,” the October 13th, 1977 piece concludes.

Speaking to the gathered press, Bing’s wife Kathryn proudly announced with tears in her eyes that her husband ‘had a very good round. I’d like that to be said’.

Eyewitnesses recall the endearingly characteristic final words that prefaced the sudden death of Bing Crosby - the rags-to-riches everyman whose rich baritone raised spirits through the Depression and the Second World War, who was the world’s first multimedia celebrity through his work in the radio, film and music industries, and who counted fans from locales as far flung as Alaska, Rio and Antrim as friends:

“That was a great game of golf, fellas. Let’s go have a Coca-Cola.”