Defenders of freedom: how the RAF earned their wings 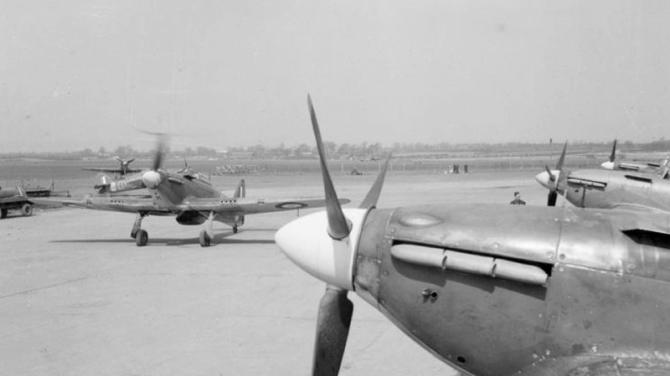 ANTRIM has always enjoyed a long and significant association with the Royal Air Force, but they formally earned their ‘wings’ at a special ceremony almost a quarter of a century ago.

The special bond was cemented at Easter 1997 when the RAF was granted the Freedom of the Borough.

The honour had been proposed by the late Jack Allen, a former RAF pilot, in April 1996 and was seconded by Councillor Roy Thompson.

Councillor Allen, who said the conferment had been one of his proudest achievements, died a short time later.

The resolution he helped pen spoke volumes of his unshakeable regard for the Force.

It read: ‘That Antrim Borough Council, in appreciation of the outstanding achievements and distinguished record of the Royal Air Force, and being desirous of recognising and continuing the ties of friendly association which have long existed between the Borough and the RAF, do confer upon the Officer Commanding and all ranks of the Royal Air for the time being and from time to time stationed at Aldergrove, the honourary Freedom of the Borough’.

Sadly the ceremony at the Antrim Forum would be the final public engagement for Mr Allen, Northern Ireland’s longest serving Mayor.

Officiating that day was Mayor Paddy Marks - and he said it was an honour to do so.

He told a packed hall that he was ‘mindful’ of the outstanding achievements and distinguished record of the RAF in many theatres of war, and in particular the role those stationed here had played in the Battle of the Atlantic.

“We wish to pay tribute to those who survived that conflict and to honour the memory of the many who gave their lives in the cause of preserving our freedom,” he said.

“The Royal Air Force has, of course, played a most important role in Northern Ireland in more recent times and we are deeply indebted to all members of that force for their unfailing efforts to maintain the safety of the people of the province.

“Conference of the Freedom of the Borough is the highest honour within the gift of the council. It is not lightly bestowed, and that we do is evidence of the respect and esteem in which the Royal Air Force is held.”

Aldergrove first became associated with the RAF back in November 1918 when it handled Handley Page aircraft made at Harland and Wolff.

With the arrival of No 9 Bomber Squadron and No 2 Armament Training Camp 11 years later the deal was sealed.

The facility played a key role when war erupted in Europe in 1939. RAF Aldergrove became part of Coastal Command in July 1941.

Pilots from the local base protected the convoys and hunted German U-Boats and after the war Aldergrove became the Northern Ireland headquarters of the RAF between 1946 and 1948.

In 1964 the Royal Auxiliary Air Force Squadrons were disbanded and the station was transferred to Maintenance Command.

The newly named 23 Maintenance Unit remained there until its closure in April 1978.

Since 1969, Aldergrove was also engaged as a base for helicopter support operations as well as handing troops, equipment, Government officials and VIPs.

On the day of the ceremony the RAF was represented by Group Captain Brian Freeman, Station Commander at RAF Aldergrove and the Senior Royal Air Force Officer in Northern Ireland at the time.

Also present were MP Clifford Forsythe and his predecessor James Molyneaux, along with the Mayors of Ballymena and Newtownabbey, councillors, clergy and armed forces personnel.

Rev Stephen McBride, from All Saints’ Church in Antrim, said a prayer for the RAF, the armed forces and for peace before the Mayor took to the podium to officially present the ornate conferment scroll.

Councillor Marks once again expressed his appreciation for the positive relationship between the Borough and the force.

And the feeling was mutual.

Group Captain Freeman said that he was proud to accept the scroll on behalf of the 1,200 officers, men and women who were serving at RAF Aldergrove at the time.

He added that the honour was also in memory of the 1,352 members of the RAF stationed in Northern Ireland who perished during the Second World War.

After the ceremony the guests made their way to the nearby Antrim Stadium to hear the RAF band which then marched out through the Castle Grounds, snaking their way through the streets of the town to the delight of hundreds of Saturday shoppers.

One man who was there on the day was Jim Kelly, who subsequently moved to England.

“I was a serving RAF Policeman at Aldergrove and was on parade that day marching through Antrim,” he recalled.

“I remember feeling a bit apprehensive about it with regards to the security situation.

“But when we formed up and marched down the main street we were very much aware that nothing bad was going to happen.

“The reception we received was great. Young and old, cheering and clapping.

“This gave us a spring in our step and our chests proudly puffed up.

“After the parade we returned to Aldergrove where the Mayor ensured we had a refreshment or two!

“I was proud to have taken part in the parade.

“I really enjoyed my time in Northern Ireland where I still have close friends and great memories.”

It is a sad fact of life that so many people involved in this article are no longer with us - but the sterling efforts of the RAF remain, carved in stone.