Saluting the heroes who marched to war from Donegore 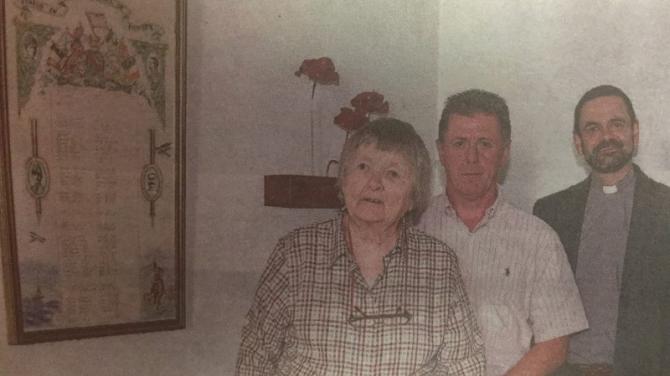 FROM the young lad who enlisted two weeks after his 16th birthday, to the 54-year-old Minister who joined up on the same day as his son, locals certainly heeded the county’s call when the Great War broke out.

Those stories and many more were remembered when a new war memorial was unveiled at the beautiful St John’s Church on Donegore Hill five-years-ago.

It comprised of a hand-painted Roll of Honour and three of the ornate ceramic poppies which featured in the world-famous ‘Blood Swept Lands and Seas of Red’ exhibition at the Tower of London.

In those halcyon pre-COVID days, crowds thronged to see the display and the church itself, which threw open its doors as part of the European Heritage Open Days.

Rev Andrew Kerr, the Minister at the helm, commissioned Michael Nugent - whose daughter was planning to get married in the church - to research the 43 names of the men who had served.

There are also three Commonwealth War Graves in the adjoining cemetery.

It is a remarkable record of service for a relatively small, rural area.

The Roll of Honour does not just list parishioners, but all the men from the area who enlisted between the 1914 to 1916 period, including men from the Anglican, Methodist and Presbyterian faiths who are also honoured on other inscriptions in Muckamore, Antrim and Killead.

Michael painstakingly researched each man, but he admitted that there were some gaps in his knowledge. Back in 2016 he was still digging for details about one of the soldiers buried in the grounds of the church - and also the full story of the person who designed and made the existing Roll of Honour.

Rev Kerr reckoned that it once hung in one of the three public houses which used to operate in the area.

Mr Nugent compiled a folder about each of the men - and unearthed some remarkable details of their lives.

“There are some amazing stories,” he told the Guardian at the time.

“There was a boy who enlisted two weeks after his 16th birthday. And there was the Reverend CJ Newell, the rector of St John’s, who went as a chaplain and is pictured in St Patrick’s wearing full military uniform.

“He was the oldest man from the area to enlist, on the same day as his son.

“He survived the war and returned home and resumed his duties at the church for many years afterwards.”

Rev Kerr said that while his predecessor sent letters home, they were heavily edited by the censor’s pen.

Mr Nugent said that another man from the area was Alexander Conlon. He originally hailed from County Cavan and was a Boer War veteran who lived in one of the local estate porter’s cottages.

He was in the Royal Irish Fusiliers and was wounded at Ypres in July 1915. He was brought back to recuperate in a UK hospital but sadly died in 1916.

And then there was William McCall, who enlisted with the Royal Irish Rifles and was training at Dundrum and Ballykinler when he was involved in a boating accident and nearly drowned.

However, he succumbed to pneumonia six weeks later, before seeing anything of the war.

All of these and other stories were gladly shared with the community and mr Nugent said he was especially keen for families to learn more about the local heroes prepared to sacrifice everything for King and Country.

“But we are still looking for some more pieces of information.

“There is a J Davison in the graveyard who died in 1920. I can find one record of a J Davison who was in the Royal Air Ordnance Corps and died on June 2 1920.

“The piece is signed by a J Millar. There is a record of a James Millar who was a parishioner recorded at Islandbane, or Islandbawn, who worked as a railway porter which could be him, but we are not sure.”

Patricia McKean spoke to the Guardian just before the historical treasure trove was made public. She had been a parishioner at St John’s since 1950 and she recalled that the Roll of Honour had been in the church back then.

She bought three of the 888,246 ceramic poppies which were viewed by around five million people in London in 2014.

“Once I had them I realised that I didn’t have a clue what to do with them!” she said.

“They’re not very domestic and when I realised we were approaching the 100th anniversary of the Roll of Honour, I thought that the church would be a more appropriate setting.”

They were mounted on a piece of oak brought back from France by Albert Patterson. He also carved and installed the piece, inscribed with the words ‘Lest We Forget’.

It was not the first special gift Mrs McKean had given to the church.

She brought the pews, inherited from the old Unitarian Church in Antrim when it closed in 1980, to Donegore - and they were driven up the hill by a tractor and trailer.

The organ, which was donated b y St Brigid’s in Glengormley in 1982, was transported by horsebox in precisely 743 different pieces.

Reverend Kerr said the church, which was recorded on the Taxation Roll of Pope Nicholas IV in 1306, was packed with historic interest.

The building was described as ‘decayed’ in 1622 - almost four centuries ago - but the nave was restored in 1659.

“The fishermen of Lough Neagh used to use the spire as a navigational aid and the church can be seen from anywhere in the valley,” he said.

“Our windows are wonderful and came from the private chapel in Loughanmore. The pulpit came from Cushendun Parish Church.

“We have a Minstrels’ Gallery, where there is a millennium time capsule. We have had members of the Ulster Orchestra playing there for weddings and even once got Danny Kinahan up there!”

There is even a grass-roofed watch house in the graveyard, which was built in 1832 to stop body-snatchers from digging up newly buried bodies for dissection.

Now, like the church itself, it is a listed building.

In short, it is a historic treasure - and well worth a visit once the current restrictions are finally eased.