Time does not dull the horror of Massereene as Antrim remembers 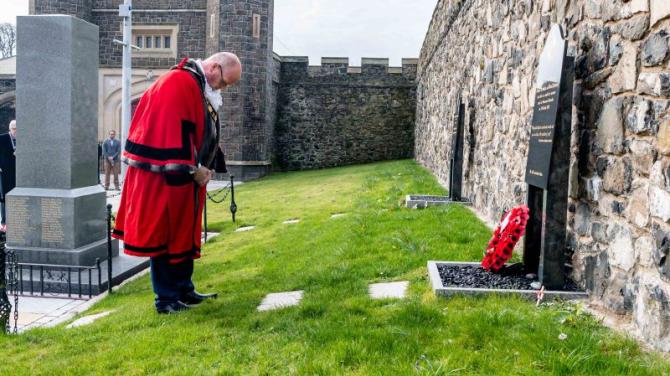 SUNDAY marked another grim milestone for the families of the young soldiers gunned down in cold blood outside Massereene Barracks.

Incredibly, 12 long years have now passed since the murders of Mark Quinsey and Patrick Azimkar - but time has not dulled the memory of the senseless, sectarian attack.

And he confirmed that he felt it was a privilege to take part in the event.

“It is an honour to lay a wreath on behalf of the citizens of the Borough on the anniversary of the tragic murders of Sappers Patrick Azimkar and Mark Quinsey, two people held in the hearts of many people in Antrim and wider afield,” he said.

“This week we remember and reflect on the sacrifice these two young men made on 7 March 2009 when their lives were so cruelly taken from them.

“On the 10th anniversary of their deaths, a commemorative bench and tree were unveiled at the site of Massereene Barracks where they were murdered.

“I know this memorial has brought much comfort and provided a place of reflection to many people within the Borough.”

Sappers Quinsey and Azimkar were children when the last British soldier had perished in the province in 1997, so they had no reason to fear when they learned that the 38 Engineers were moving to the quiet garrison town on the shores of Lough Neagh.

No soldiers had died in Antrim during the darkest days of the Troubles, despite the heavy presence of three military bases, so it was seen as a lucky deployment - and the perfect launching pad for the more testing challenges that lay ahead in Helmand Province in Afghanistan.

After all, the locals were friendly. There had been romantic liaisons, children and even marriages in the past. Some of the men had even set up home in the town after they were demobbed. What could be better?

In turn, the people of Antrim largely welcomed the new neighbours with their unfamiliar accents, neat haircuts and bulging wallets - particularly the town’s traders.

The Regiment even had the rare distinction of receiving the Freedom of the Borough.

They had become more and more a fixture of local life since the guns had fallen silent, regularly venturing out of the confines of camp - and when they were unable to visit town, they ordered the home comforts in.

On any given Saturday it is understood that up to 20 fast food deliveries snaked their way along the Randaslstown Road to Massereene Barracks.

No-one could have guessed that the men of violence had spotted the pattern and were preparing to make a delivery of their own.

The deaths of two young soldiers as they collected a last supper of pizza was all the more shocking because no-one saw it coming - least of all the unsuspecting troops.

Gunmen stepped from darkness - some would say the past - to give their deadly verdict on a decade of stability in the only way they knew how.

High velocity automatic fire designed to bring Stormont to its knees brought four soldiers and two ‘collaborators’ who dared deliver their takeaways to the ground. One of the young troops hurled himself on top of Antrim man Anthony Watson, perhaps saving his life as the streets ran red.

Gale force winds battered Antrim that night, carrying the terrifying crescendo across the town - shaking locals from their reverie and waking frightened children from their beds.

Any hopes that this was an ill-advised fireworks display were dispelled when a baleful siren and the clatter of scrambling helicopters filled the night sky.

The peace had been shattered by 60 bullets in less than 60 seconds.

Six men had been cut down in the withering hail of bullets and two young men who had dreamed of fighting for Queen and country lay dead. The war on terror had come home, but they were the last to know.

Within hours the media invasion began and the ‘Massereene murders’ became international news. The story was painfully familiar, but the backdrop to the senseless slayings had somehow shifted.

With British troops still dying with sickening regularity in that distant war zone, it was with a grim irony that Northern Ireland - a dead story for most - suddenly hit the front pages again.

The Troubles, as they were euphemistically known, had claimed more than 3,600 lives, each tragedy burning brightly in the public consciousness until it was eclipsed by the next.

But the horror of the double killing would linger on in Antrim. The Real IRA may have been prepared to slaughter the innocent to achieve a united Ireland, but on that blustery March night they somehow managed to unite a community.

Without fanfare, and long before the anchormen and women laid down roots outside the barracks, local people had silently come together to register their revulsion.

For those present, that simple but impressive display of solidarity painted a vivid picture of a community as one in grief. Their hot tears offered cold comfort to the triggermen.

The first question for most was ‘why?’ - invariably followed by ‘why here?’

Local people of all faiths and none gathered the following morning in open defiance of the men who had tried in vain to drive a wedge between them.

That message was reinforced one week after the murders when 500 people converged on the Randalstown Road once more to pay their respects.

The Engineers have long since left the former barracks, but new owners Randox built a memorial garden at the scene of the attack.

For the families, it was further proof that their sons were still remembered.

Geraldine Ferguson told the Antrim Guardian that while she had dreaded the painful visit to the murder scene, it had helped bring them closer to the events of March 7 2009.

“This really is the hardest place in the world for me,” she said.

“This is where my son was murdered. There’s no escaping that.

So where had they found the strength to make that trip across the Irish Sea once more?

“We have always received a very warm reception here, which has been a great comfort but this is where my child died.”

And, of course, the killers are still at large.

“Yes, that’s the double burden. The police unearthed a lot of evidence but justice has not been served.

“Years have passed now, which seems incredible. It’s gone fast in a way, but many of those days were very hard.

“Do I think there will be convictions? Truthfully, no. I’m afraid we will have to learn to accept that.

But down the years they have drawn enormous comfort from the support they have received from local people.

“Thank you Antrim for keeping the boys close to your hearts over the years, even though you never knew them,” added Geraldine.

“I would also like to remember the others who, through no fault of their own, were caught up in the horror of that night. All of them were left traumatised and three were left with life-changing injuries. Their lives changed forever as a result.

“Our thoughts are also with Mark’s mother Pamela for whom losing her only son was more than she could bear and she died of a broken heart in 2013 - another victim of the Massereene attack, of whom there are very many more.

“I am mindful of what St Paul said when he stated: ‘Do not be conquered by evil, but conquer evil with good’. That is what Antrim has done.

“They have transformed a place of terror into a place of peace and reflection, and I can’t thank them enough.

“My family and I would like to thank all those who have been involved in making this possible. Dr Fitzgerald for his agreement to the creation of the garden and the council for approving and funding it.

The families had reached another milestone. Sadly, for them there are many more to come.

Theirs is a lonely vigil, but the people of Antrim stand with them.