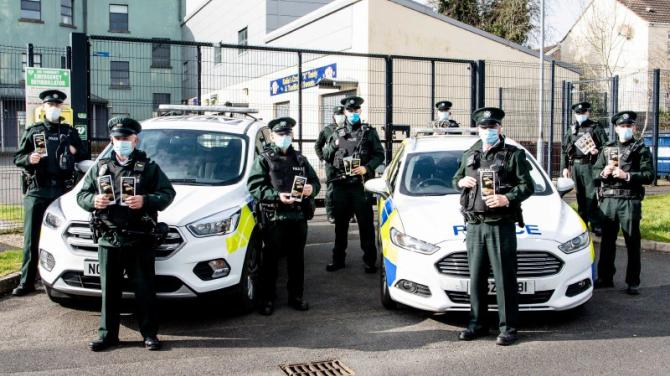 THE police have stepped up their crusade against community crime this week - and their presence has the full support of Sinn Fein.

South Antrim MLA Declan Kearney has welcomed the PSNI intervention in the Rathenraw and Greystone estates as a response to the concerns he has raised about local neighbourhood crime.

“In recent weeks, I and Party members in Antrim town have engaged with local residents from the Rathenraw and Greystone estates about actual, and attempted burglaries, and other criminal activities in these estates,” he explained.

“I have spoken in detail with PSNI District and Neighbourhood management about crime patterns in these neighbourhoods and requested that an intervention be undertaken by police.

“It was agreed this would take the form of a leaflet drop by officers, aimed at encouraging neighbourhood vigilance and reporting of crime.

“I strongly believe that such initiatives are essential to build community confidence in policing, and create opportunities for residents to engage directly with neighbourhood police teams.”

He added that the lealets go to the heart of the problems blighting the lives of many locals.

“The information distributed during this intervention included the ‘Silent Guardian’ anti-drugs leaflet, which has previously proved successful in promoting local cooperation with police inquires, and also advice on home safety measures, in recognition of burglaries and criminality which have left victims traumatised.

“We need a zero tolerance approach to all forms of crime in Antrim Town.

“Everyone is entitled to live free from the threat or fear of crime.

“That objective will only be achieved when information is provided to police from within the community which assists in apprehending and putting before the courts those criminals who are a blight in neighbourhoods such as Rathenraw and Greystone.”

He added that local people also have a vital role to play.

“I strongly encourage everyone throughout South Antrim to help deliver positive change by remaining vigilant, watching out for their neighbours, especially older residents living alone, and by reporting all suspicious activity directly to the PSNI on their enquiries line 101, or anonymously by ringing Crime Stoppers on 0800 555 111.

“Alternatively anyone with information about local crime can contact myself, or the Sinn Féin organisation in the constituency.

“I am grateful to the PSNI‘s Antrim Neighbourhood Police Team for its cooperation with this particular initiative to support the residents of Rathenraw and Greystone, and for its commitment to policing in partnership with the community.”