Killead and the Great War 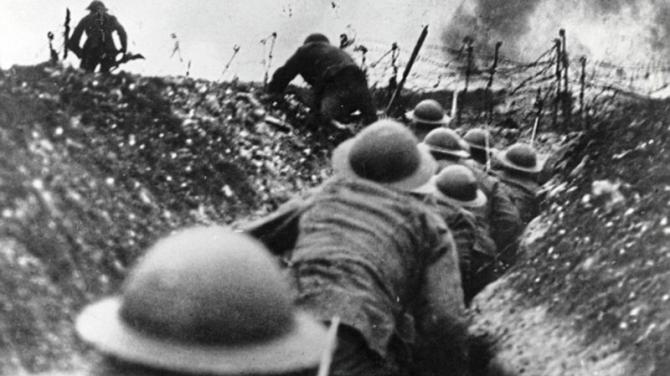 KILLEAD, like many other towns and villages, heeded their country’s call when the Great War erupted.

The loyalty to the crown was underlined just two years earlier in 1912 when almost 350 names were collected at Killead vicarage when the Ulster Covenant was signed in opposition to Home Rule.

In March 1914, after the formation of the Ulster Volunteer Force, it was announced that the officers and non-commissioned officers of the South Antrim Battalion would train at Langford Lodge, the home of the commanding officer - Lieutenant Colonel Hercules Arthur Pakenham.

There were two barrack rooms on site to accommodate 80 men, a marquee in the courtyard for use as a mess and lecture tent, a lecture and recreation room and a dry canteen.

Three parade grounds were made available consisting of 15, 20 and 40 acres. Participants made their way to the camp by train to Crumlin or in motor conveyances from Antrim.

It was reported to the local press that each man paid his own camp fees and collected his equipment. They were required to wear armlets at all times and on parade they were expected to have their bandolier, haversack, belts and bayonet.

Locally, Shane’s Castle had been offered as a hospital with smaller facilities in the Muckamore, Crumlin and Glenavy areas.

The South Antrim Battalion was preparing to join other battalions across the province to resist Home Role. But on August 4 1914 Britain declared war on Germany - and the course of local history was changed.

Many of the Ulster Volunteers enlisted and served with the 36th Ulster Division which was formed in September 1914.

The 11th Battalion of the Royal Ulster Rifles, under the command of Lieutenant Colonel Pakenham, trained at Clandeboye throughout December 1914 and eventually reached France in October 1915. They were deployed to the front line the following year.

Three of the churches in the Killead and Gartree area display lists of names of both those who sacrificed everything in the Great War and those who served.

Sixteen out of the 87 names displayed lost their lives during the course of that bloody conflict. Forty-four of those names appear on the Crumlin War Memorial and 17 are listed in Glenavy Protestant Hall, which honours those members of the Orange Order from the Glenavy District who served.

Forty-one names from the Killead area are recorded in the Presbyterian Church of Ireland Roll of Honour - and it states that five of those men were killed in action. One later died of war wounds, a further 13 were wounded but survived. One soldier was listed as a prisoner.

Those with family serving at the front lived with the constant fear that one day they may be faced with the news that their loved ones would not be returning.

The press reported daily on those missing, wounded and killed during the course of the war. Tragedy had no respect for class or creed.

The Reverend Canon John Clarke, rector of Killead Parish Church, lost his younger son Edward on April 9 1917. The 24-year-old, a Second Lieutenant with the King’s Royal Rifle corps, was killed in action during the Battle of Arras in France.

At Killead Presbyterian Church, Reverend James Alexander Hamilton Irwin appeared to be determined to maintain an air of normality and pressed ahead with normal church business.

In May 1915 he travelled to Castle Douglas in Scotland and attended the induction into the Prebytery of Kircudbright of the former minister in Templepatrick, Reverend Luke McQuitty.

The event took place in the Douglas Arms Hotel and it was reported that reminders of the conflict were never far away. Apparently the room was ‘decorated in a manner which reflected all the pervading feeling of patriotism’.

On the home front, Rev Irwin was overseeing the construction of a new day school and church hall in Killead.

The foundation stone was laid on January 21 1916 and eight months later the building was opened.

Whilst it was being built, the intact foundations of an old church dating back to the 12th century were uncovered.

Crumlin doctor William Hunter chaired the opening of the new hall. He informed those present that he had questioned the project from the outset due to the fact that locals were being urged to channel donations to war charities instead.

Nevertheless, he revealed that he had been impressed by the good Reverend’s response.

“Education was a means by which they could beat Germany after the war was over,” he said.

Dr Hunter supported Rev Irwin’s comments and added: “They should see the young men who would take their place in the battle of life would be thoroughly equipped in every way, both physically and educationally, to combat the Germans when the war is over.”

It was to be another two years before the hostilities ended.

On Sunday January 16 1916 James Megarry, a serving soldier with the 11th RIR, was speaking with Mrs Margaret Hamill and her daughters Maggie and Isabella in their home in Crumlin.

James was nearing the end of his leave and was preparing to return to his regiment again.

He told Maggie that in the event of him being killed in battle she could have all his possessions.

James tragically lost his life on August 8 1917 and his name appears on the Ypres Memorial in Belgium.

The verbal statement that he made in January 1916 would later be used to form what is known as a nuncupative will.

James Megarry’s will and associated documents form part of a collection of soldiers’ will which can be accessed on the National Archives of Ireland website.

In August 1916 the press published a story relating to Mrs Annie Courtney, a widow who resided in Gartree. She had lost five sons and at least four grandsons serving in the military.

Four of their names appear on both the war memorial in Crumlin and at Gartee Church.

That same month it was reported that local men George Beattie and James Moore were missing. It later transpired that they had been taken prisoner - and thankfully both survived.

There are a total of 16 names listed on the Killead War Memorial who lost their lives in the Great War.

Arthur Bell, David Johnston, William Logan, Robert McKibben, William Reid and Samuel Williamson are all known to have been killed in 1916. Three of those men lost their lives on July 1 1916 - a date firmly engrained in the province’s history.

On the first day of the Battle of the Somme 57,470 casualties were suffered by the British, including 19,240 deaths. This was a tragedy on an unimaginable scale - and local men were right there on the front lines.

More than three million men fought at the Somme and one million men were wounded or killed, making it one of the deadliest battles in human history.