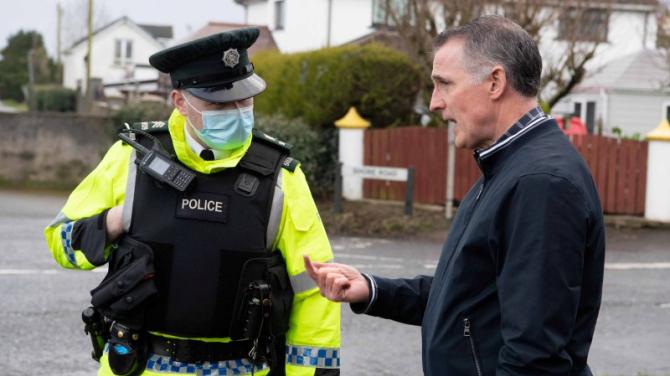 SINN Féin MLA Declan Kearney has welcomed the PSNI response to his representations concerning the need for an increased focus from police on road safety issues in Toome.

Officers were on the ground this week gauging the speed of traffic at some notoriously dangerous stretches of road in the area.

Declan Kearney said the highly visible policing was a step in the right direction.

“In direct response to concerns raised with myself and Councillor Henry Cushinan about speeding on the Moneynick Road into Toome, I arranged a meeting between local residents and neighbourhood police to discuss this problem and the need for a renewed programme of speed detection operations on the main road into the village,” said the local MLA.

“Sinn Féin’s consistent prioritisation of rural road safety throughout South Antrim over recent years has resulted in a series of measures to enhance safety for all road users.

“In the Toome area, progress secured by myself and Councillor Cushinan has included an extension of the 30mph on the Moneynick Road leading into Toome from the Gloverstown Road out to the Drumderg Roundabout.

“This particular reduction in the speed limit from 40mph to 30mph leading into the village was delivered to improve road safety for local residents and road users, especially those pedestrians, many of them children, walking to local amenities, such as St Oliver Plunkett Primary School, Cargin GAC and nearby shops.

“However, in recent times local people have raised fresh concerns about the failure of drivers to comply with the speed limit on Moneynick Road.

“As a result the PSNI have agreed with me to introduce a renewed programme of speed detection operations in the area to encourage compliance with the speed restrictions.

“I am grateful to the neighbourhood police team for joining me to meet with residents and carry out an extended road safety operation.

“Motorists should now take note that in the coming period intensified speed detection operations will be carried out on this section of the Moneynick Road in Toome.

“I am also pleased these interventions will be extended to neighbouring Moneyglass, where similar issues concerning non-compliance with speed limits have been reported.”