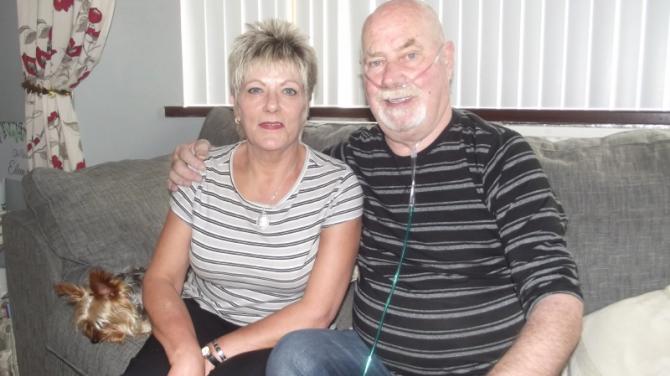 SHORTLY before the first lockdown Ken Wilkinson contacted the Guardian quite out of the blue. He knew he was dying and he wanted to talk.

By his own admission, he was a divisive character. Respected by some, feared by others, he had been a force to be reckoned with for decades - both as an unapologetic loyalist and as a community campaigner.

He was 71 at the time, but in truth he looked older. He explained that his life had been ‘turned upside down’ by news that he was battling a rare lung disorder. He had Interstitial Lung Disease, a progressive condition for which there is no cure.

And last Thursday it finally killed him.

In recent years he had known that his health was on the wane. He had grown to rely on oxygen and medication to deal with the crippling chest pain. His mobility had suffered too, to such an extent that when he married long-term partner Eileen in 2019 he had to use a wheelchair - something that bothered him deeply.

But worse was to come. His health failing, he was rushed to Antrim Area Hospital where medics battled to stabilise him. That they eventually did - though the outlook was bleak.

Speaking in his final Guardian interview, the former UDR man lifted the lid on the moment he realised that he was facing his last stand.

“I was taken to A4 and eventually a doctor came to me and confirmed the worst. He told me that I might never get home,” he said.

“It was like getting hit with a sledgehammer. We couldn’t believe what we were hearing.

“I had ILD. It’s a disease they know very little about. They can treat the symptoms, but they can’t cure it, unfortunately.”

Eileen admitted that they struggled to take in the enormity of what they were hearing.

“We just cried and cried for the first two days,” she said.

It was a desolate time for the couple, but even in their darkest hour they experienced real warmth.

“I was in that ward for four weeks and from day one I was tremendously moved by the compassionate care I received. It really was amazing,” Ken said.

“On my second day there a doctor came to see me and said that he had been thinking about me all night. He was afraid that I wouldn’t be there the next morning.

“I really could not speak highly enough of the calibre of the staff I met. From the cleaners to the consultants, they were a truly remarkable bunch of people.

“I was a bad sleeper and would often be reading or watching my tablet in the middle of the night and they would come and give me tea and a couple of slices of toast. Nothing was too much bother. That sort of thing can make a real difference.

“People are always very quick to run down the National Health Service, but I’ve seen it in action. This was professionalism second to none.

“I was treated like a person, not a number.

“There was a real camaraderie among the patients and staff. Everyone had good days and bad days, but we all tried to keep everyone’s spirits up.

“There were hard times, no doubt about that, but there were many laughs along the way too.”

During Ken’s time on the ward, four people died - and once again staff rose to the challenge.

“They knew exactly what they were doing and they gave those patients real dignity in death.

“They deserve a medal. They really do.

“When I was finally allowed to go home the staff said they would miss me. And you know what? I miss them too. That’s how deeply touched I was by the whole experience.”

When he returned home, Ken began putting his affairs in order - even laying out detailed plans for his own funeral.

He also sold off his beloved pigeons, ending his family’s century-long association with the sport.

It was not an easy process, of course, but Ken revealed that it had given him a new perspective on life - and a determination to live each day to the full.

And in that spirit he urged the people of Antrim to consider how they could make a difference to people living on the brink.

“I would urge everyone to consider organ transplantation. Once you go they are of good to you, but they could make a real difference to people who want to spend a bit more time with their loved ones,” he said.

And now he is gone. He fought for longer than he dared hope, but the battle is over.

His passing sparked an avalanche of comment on social media, much of it reflecting the divisions still evident 23-years after the Good Friday Agreement he helped forge.

For loyalists he was a ‘gentleman’, a ‘loyal volunteer’ who could stand down - his life’s service complete.

But others were not so generous - despite the fact that he had revealed in his final interview that he did not want to offend his Catholic friends with loyalist trapping at his funeral.

Complex and contradictory to the very end.